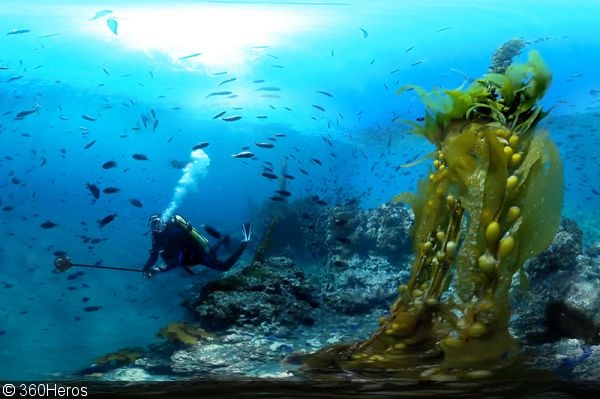 Michael Kintner has spent the better part of a decade revolutionizing the technology behind panoramic videography, with applications of capturing 360-degree footage spanning, from massive rock concerts to drag car racing and dare devil hang gliding. But it wasn’t until a fateful dive off Cozumel that the long-time scuba diver realized its potential for underwater use.

“The divemaster kept pointing behind me, but I didn’t realize there was an enormous shark right at my fin for the entire dive,” recalls Kintner, the founder and CEO of 360Heros. “[I realized] we have to find a way to do this underwater.”

Back at his workbench, Kintner started designing the ultimate 360-degree underwater video setup by combining multiple GoPros together, facing every direction. Hoping to gather a buzz for the revolutionary technology, the team at 360Heros took the prototype setup out for a test dive with the world’s top apex predator. What happened next probably wasn’t the type of publicity Kintner hoped for: Less than a minute into the water, a great white shark nearly consumed the camera whole before disappearing down into the murky New Zealand waters. The $5,000 reward for the camera’s safe return is still up for grabs.

After months of hard work and design put into the prototype of the first underwater 360Hero setup, it only took a minute for it to be torn apart by a great white shark in New Zealand

With more than a half million views, the video of the prototype’s demise did create a buzz around the notion of capturing 360-degree underwater footage—but not just from the casual videographer. The ability to capture high-resolution panoramic underwater footage, offered by companies such as 360Heros, holds tremendous potential for military use, commercial applications on deep oil rigs, and professional filmmaking. But perhaps most critical of all, marine researchers can now document an entire ecosystem with just a single camera system setup.

“The goal is to show how our world’s oceans are changing,” explains Kintner of the research and conservation applications for 360-degree video. “And with technology like this, you are able to see the entirety of the coral reef around you.”

From studying changing reefs in Hawaii to documenting predatory behavior for Shark Week, panoramic video is hitting its stride in the underwater research world. Researchers need no longer hire professional videographers or place multiple cameras along a site: Because the 360-degree cameras are literally capturing everything happening at once, the positioning of the camera doesn’t have to be exactly perfect.

The 360Abyss, 360Hero’s flagship camera system, combines six GoPro cameras to produce up to 7.5K resolution panoramic footage. Each camera is housed in a separate compartment to avoid catastrophic loss if one section were to flood. But that’s unlikely considering it’s depth rated down to 3,000 feet. And while such design and performance specifications are geared more towards commercial and military purposes, the 360-degree results have a tremendous ability to immerse even the most landlocked person into the underwater world.

In the 1950s, Jacques Cousteau’s then-revolutionary underwater images published in The Silent World inspired videographer Bill Macdonald to strap on a scuba tank and purchase a Brownie camera with waterproof pouch. Now a 60-year underwater film veteran, Macdonald believes the immersive abilities of 360-degree footage can inspire a new generation. 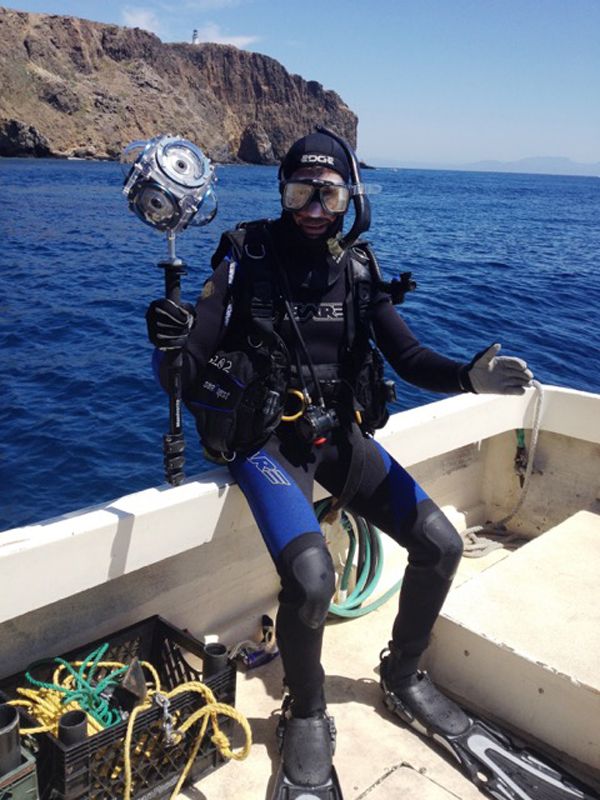 “We have something here that can be used as a tool to help someone share in your adventure,” explains Macdonald, who uses the 360Abyss setup. “They can share in the experience of diving while being on dry land.”

After learning of the 360Heros underwater project through a Kickstarter crowdfunding page, Macdonald volunteered up his services to capture some of the first-ever underwater panoramic footage. The initial video captured a full panoramic view of 30 sharks swarming around Yap’s “Vertigo” dive.

That’s just the tip of the iceberg: As the technology becomes more mainstream, Macdonald hopes that there will soon be panoramic footage from every ocean, even every dive site. A catalog of 360-degree video would be an invaluable asset to marine researchers, transforming even the most casual divers into citizen scientists.

A 360Hero setup gets a second chance to photograph a great white shark, this time without being eaten, off the coast of Guadalupe, Mexico

But you don’t need to be a scientist to view and appreciate the immersive experience of panoramic underwater video. Through virtual reality headsets and dome projectors like those at your local planetarium, you can experience Yap’s “Vertigo” dive in the most lifelike way short of traveling to Micronesia. 360Heros’ CEO Mike Kintner even sees the ability to view panoramic footage coming soon to 4K television sets. So maybe one day he will get to see the shark that followed him on the dive in Cozumel—well, virtually at least.

While the days of 3D-panoramic televisions are still to come, 360-degree underwater footage like that produced by Bill Macdonald will help tide seasoned divers over until their next adventure, bring new divers into the fold, and provide researchers access to data from the field while sitting in their office.

“You can be immersed, experiencing the adventures other people have had,” Macdonald emphasizes. “Right now, you can just sit in your swivel chair and go diving.”