Optical Low Pass Filters have been commonplace on most digital cameras but only recently have they become the focus of mainstream user attention.  With the Nikon D800E came the option to have a camera come from the factory with the OLPF (Optical Low Pass Filter or Anti-Aliasing Filter) removed.

Previosuly, you could send your camera in to the manufacturer to have this procedure done, but now with the release of the Nikon D7100 without even the option to have an OLPF, it seems the industry is taking a turn.  This was immediately touted as a great benefit to both resolution and sharpness, but why and is this important for underwater photography? 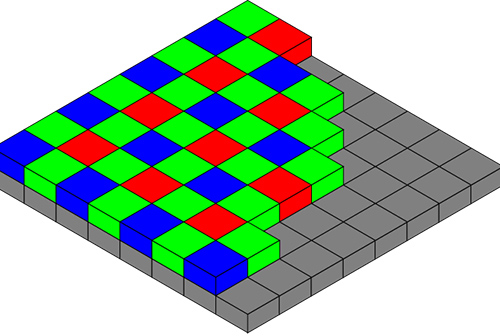 Only cameras with a "Bayer Array" sensor need Optical Low Pass Filters - this basically means any camera that was not manufactured by Sigma.  In a Bayer array, the pixels that detect Red, Green, and Blue are laid out in a pattern next to each other.  In Sigma's Foveon Sensor, there are three layers, one for each color, thereby inherently preventing the problems that the OPLF is designed to fix.

The Optical Low Pass Filter, hereafter called the Anti-Aliasing Filter, makes an image less sharp - on purpose.  The pixels on a sensor "sample" an image they are shown when the shutter is opened.  In an image with a strong repetitive pattern, the sensor can misinterpret the pattern, which can result in what is called aliasing.

This process can then be repeated again when the computer looks at the data and tries to reassemble the image, compounding the problem. The solution to this aliasing (called Moiré) is to put a filter in front of the sensor that just slightly blurs the image, allowing the pixels to detect the pattern correctly without the aliasing.  Due to the nature of this filter, the image appears less sharp than it does without it. 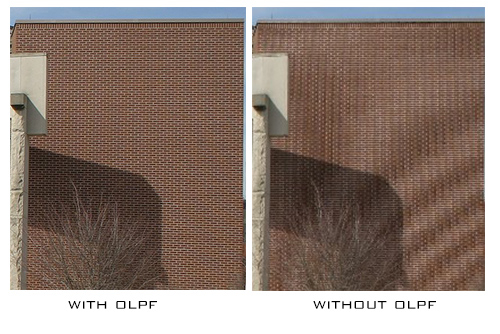 An example of extreme Moiré

So, does this matter to underwater photographers, after all there are very few brick walls or perfectly straight lines in the ocean (apart from waves crashing on a beach shot from a perpendicular angle)?  It seems that the absence of an Anti-Aliasing filter is not any real detriment to shooting underwater.  If anything, I would consider it an advantage because of the inherent loss of sharpness we encounter with the addition of more layers of glass (not always of the finest optical quality) and large amounts of water between us and our subjects.