Having spent many years working in the dive industry, one of my biggest pet peeves is a diver returning to the boat saying there was nothing to photograph.

Underwater there is always something to photograph.  It may not be what you were looking for , but there can always be amazing photo opportunities—you just have to make the oppertunities.  I took this shot at the end of a dive right underneath the boat in a sandy area playing with my ReefNet SubSee +10 diopter. 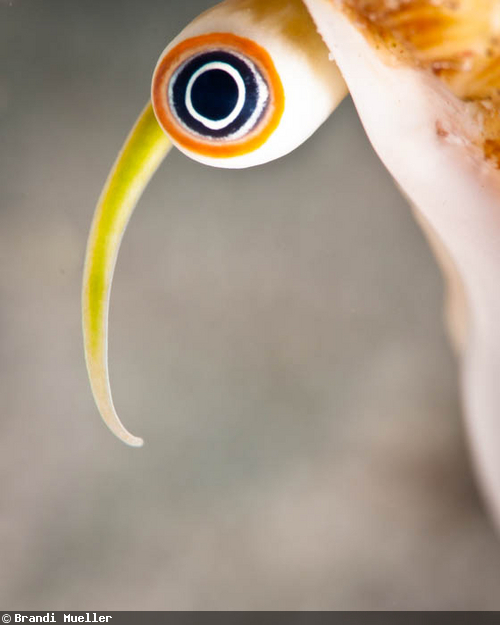 The Idea:
Diopters are incredible tools to get super-macro images and I find using them fun.  The sometimes considered “less-exciting” animals we pass over on every dive such as snails, urchins, hermit crabs, and coral can make for a unique and interesting super macro shots.

This snail was an easy subject to practice using a diopter because it wasn’t moving very fast.  In the past I have shot the shells of mollusks to reveal unique patterns and textures but it’s rare to see their bodies out as much as this one was. I took a few photos without the diopter (just using a 105mm lens) and reviewing them I noticed its eye looked very interesting so I put on the diopter and hoped to get a shot. 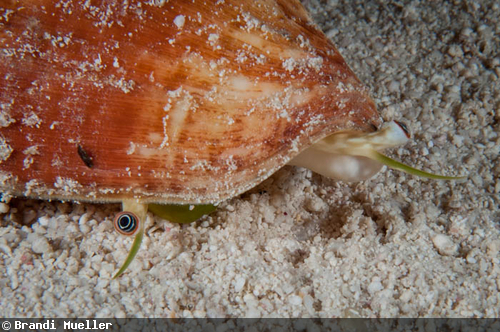 The Shot:
The snail was on a flat, sandy bottom so I was able to put my camera down in the sand and shoot the tiny eye from under the shell.  I wasn’t sure if the eye would stay out if I got as close as I needed to use the diopter, so I moved my camera slowly up to its eye.  I used only one Ikelite DS161 strobe and turned on the movie light to light up the area to make focusing easier.    Depth of field can be lost when using diopters so I took the shot at f/18 to try to get focus in the eye.  I didn’t use a smaller aperture because I wanted a neutral background instead of a black background.

Out of several shots I liked this one best because the eye was sticking out at an angle so that directly behind was sand instead of other parts of the snail.  That helped to blur the background and let the eye really stand out instead of there being a potential for distraction of other snail patterns behind the eye. 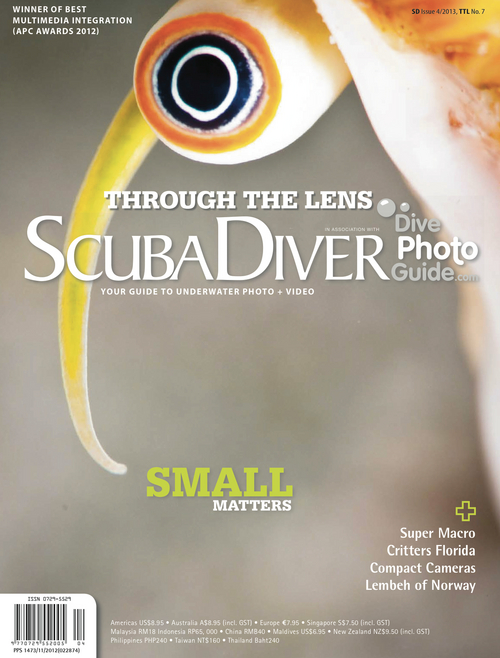 Being that it was the end of the dive, I was able to spend quite a bit of time just taking photos of this snail right underneath the boat.  So the next time there’s “nothing to take photos of” look a bit closer.  You never know what might end up on the cover of Scuba Diver- Through the Lens magazine.

terry goss wrote:
Great shot, and true enough that there's always SOMEthing to shoot - but you do have to have the right equipment on-hand. Most of my travels are wide-angle-only, so this would have been but a pixel for me.... :P
You must be logged in to comment.
Support Our Sponsors
Advertise With Us
Newsletter
Travel with us 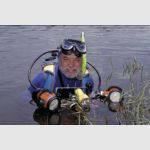