It is a truism of technology that products continue to appear which at first glance seem to do a job that doesn’t need doing, yet once you try them you scratch your head and wonder how you ever coped without them. The MemoryKick media center fell into this category for me.

The MemoryKick is a combined (deep-breath-in) portable hard drive/photo-video backup/photo viewer/card reader/video player/MP3 player. As an underwater photographer, my interest was in its primary function for downloading, reviewing and storing images, which is something I can already do with my laptop, card reader and external hard drive. So I approached the MemoryKick with some scepticism as it aims to replace the last two of these, making its case by conveniently combining the tech into one package, providing a screen for reviewing images and, not least, for the speed at which it operates.

I collected two MemoryKick units from Cathy Church’s underwater photography shop in Grand Cayman, with a plan to put them through their paces under intensive shooting conditions during the two photo workshops I was running on the island. I used one unit and lent the other around the guys on the workshops. I also hung on to one of the units for a continuation trip to photograph manatees, as the long hours in the water with Florida’s finest usually mean my SanDisks are fit to burst. I wanted to see how the unit fitted in with a typical underwater shoot and evaluate it against what most of us are currently using (laptop, card reader & ext hdd). 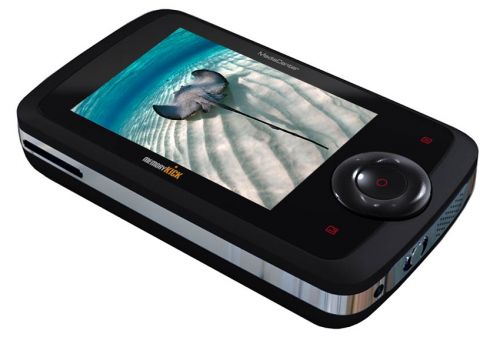 The MemoryKick media center. The screen is large, detailed and bright and the controls are straightforward
First, the MemoryKick is no luggage burden. The hand-sized unit takes up no more space that the combination of external hard drive and card reader you already have (although you will have to pack a small charger). Cost depends on the amount of storage, B&H lists them at starting at $290 USD for a 120GB one and going up to $430 for a 500GB (Cathy’s prices were cheaper!). The same shop lists a simple portable 500GB hard drive for $100-150 and card reader for $10-30, so you are looking at spending another $150-250 for the speed and extra features.

The download speed is astounding. A completely full 8GB CF card takes more than 20 minutes to download into my laptop via my USB-2 card reader. The same card on the MemoryKick took less than 3 minutes and then just another further 3 minutes to copy onto my laptop and read into Lightroom. Typical dives downloaded often in less than 1 minute. The manufacturer claims it is the world’s fastest, but I did not have any other brand to verify this claim. But there is no doubt that speed is increasing desirable not only as megapixels and bit depth increase, but also with cameras now capable of shooting hi-def video we have even more ways to fill our cards.

The units are very intuitive to use. I tried them on the first day without even reading the instructions. Downloading and then copying the images across to my laptop was completely logical. The unit is compatible with all the standard memory cards, compact flash, SD, SDHC, XD etc, and naturally can read RAW files. Free user downloadable updates allow you to read the latest camera RAW files. The unit can download up to 4 cards or devices simultaneously although there is only one slot for each type of card.

The 3.5” (90mm) screen is larger than any existing SLR and bright enough to be visible outside. It is possible to zoom in on images, although I found that the large screen already gave me a good idea of sharpness, and to display EXIF and histograms. One criticism I have is that I found the unit was quite slow to browse through large folders of RAW files. Possibly this is because of the large size of the 14-bit RAW files from my D700? 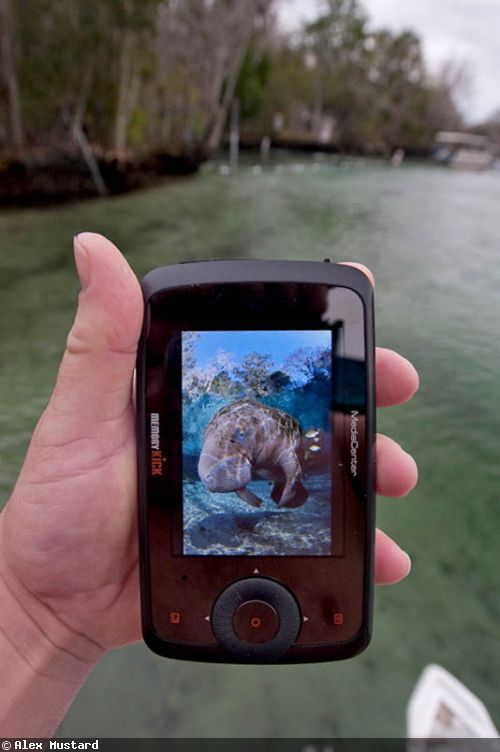 The MemoryKick is just slightly bigger than most portable hard drives. This image (which is unadjusted) shows how clearly the screen can be seen, even outside.

The units handled everything we threw at them, including some intensive photography days when I took over 1000 images. It was a significant benefit to be able to download bulging cards into the both the MemoryKick and laptop without wasting any significant time in otherwise busy days. I had one small problem with the units I tested. In my unit one of the pins in the CF card reader came loose, which obviously stopped me downloading other cards. The other unit was fine, and I concluded this was a one-off.

I see the MemoryKick fitting into the modus operandi for most underwater photographers in two ways. First, on shorter day or weekend trips closer to home, I would take the MemoryKick and leave my laptop behind. Not only lightening the load, but also lessening the valuables left in the car. On a weekend trip I would be happy checking my images on the 3.5” screen. Second, and probably the main way I would use it, is to provide a much faster way of downloading images into the laptop on a longer trip. I would still favor the laptop for browsing images, not least because it gives options for processing and sharing them through the web. The MemoryKick would be downloader and backup. Actually, I can see myself travelling with a MemoryKick and a external hard drive! Two copies good, three copies better.

I started out with a pretty unconvinced mindset towards the MemoryKick, since I already have a card reader, laptop and external hard drive that combine to do its job. But now I have given it back, I feel like I have stepped back in time. Downloading now seems to take an age. I am planning to buy my own one in the next few days and I know a number of the guys who tried it on the Cayman workshop have already done so.

Dr. Alexander Mustard, 35, trained and worked as a marine biologist, but since 2004 has worked full time as an underwater photographer and author. His photographs have won many awards including, on multiple occasions, in the BBC Wildlife Photographer of the Year. His most recent book Reefs Revealed (2007) won the prestigious Grand Prize at the World Festival of Underwater Photography in Antibes, France. His photographs have been displayed in exhibitions around the world and a particular highlight was personally presenting his work to Queen Elizabeth and the Duke of Edinburgh.

Tim Rock wrote:
Thanks for the review Alex! Looks like it would be handy for editing RAW as well. I see no mention of a DELETE image button anywhere in your story or in the PDF User Manul (free for download from manufacturer website). Can you use this little gem to run through and trash out-of-focus shots and that sort of thing?
Not that I (ahem) ever take any.

Tim of the Deep
Guam
You must be logged in to comment.
Support Our Sponsors
Advertise With Us
Newsletter
Travel with us