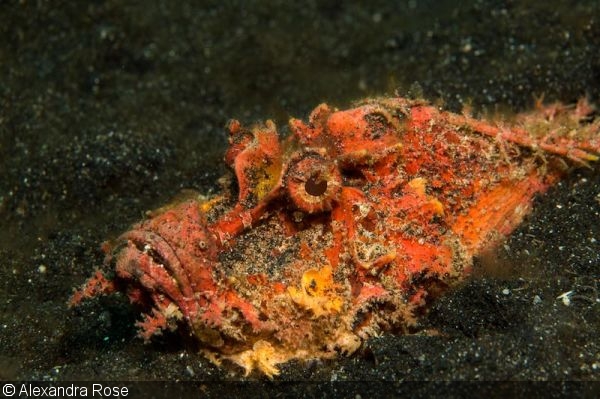 A spiny devilfish trying to blend in

Earlier this year I had the privilege of spending a few days with the good folks at Lembeh Resort. My visit was the last stop on a journey that began on the west coast of North Sulawesi in the bustling city of Manado. Over the course of 10 days, I drifted along the dramatic, colorful reef walls of Bunaken National Park, hunted for dugongs in the sandy shallows of Bangka Island, and encountered my first blue-ringed octopus at 65 feet in the Lembeh Strait.

I had the opportunity to experience all that the region has to offer through a unique collaboration between Lembeh Resort and Murex Resort—billed as the “Passport to Paradise” dive package. As most underwater photographers shoot both wide-angle and macro subjects, this package offers photographers a way to engage in both disciplines. 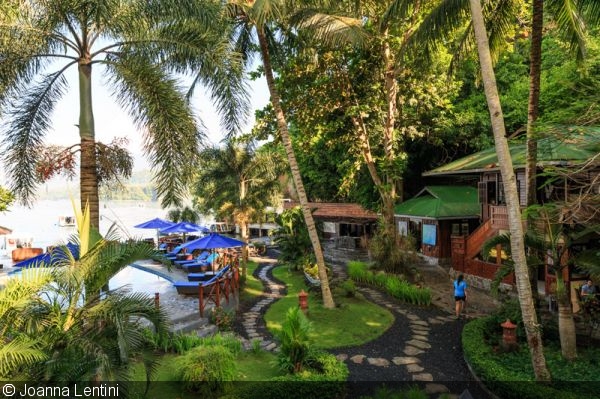 For those that are inclined to focus on the minute and bizarre, the Lembeh Strait is an absolute must. Separating the main island of Sulawesi from Lembeh Island, the Strait is world-renowned for being home to some of the most fascinating marine critters you’ll ever encounter. While I tend to favor wide angle, I do enjoy dabbling in macro photography and am always mesmerized by the macro captures I see across social media and the industry at large.

Equipped with my Canon 100mm macro lens and 10Bar strobe snoot, I assembled my system and set out into the muck—excited to create new images in a place I had heard so many incredible things about. Once my macro port was in place, I was certain I wouldn’t need my fisheye lens for the remainder of the trip. Surely, in this macro haven, my Tokina 10–17mm fisheye lens had no place—or did it? 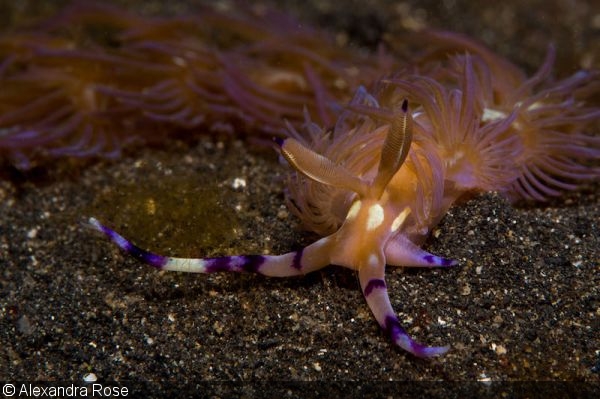 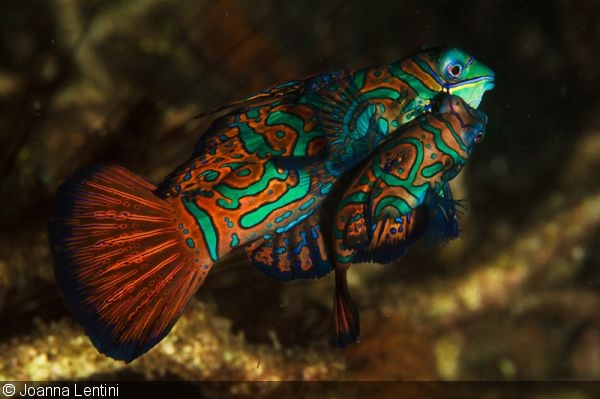 I set out into the sandy, volcanic sands of the Strait on a mission to fine-tune my critter radar. Until very recently, I haven’t had much luck finding critters. (Perhaps it’s my short attention span?) Mostly, dive guides familiar with the sites have to point out the tiny life forms—and even then I’m sometimes not even sure what I am looking at. So I made a pledge to myself to work on my scanning and identification skills whilst in Lembeh.

Muck diving, as it’s known, is something I’m sad to admit I had once failed to truly appreciate. Devoid of coral reefs and large fish, I equated it with some sort of strange, quirky cult. Of course, I know better now, and have found myself engrossed in the addictive pursuit on many occasion. 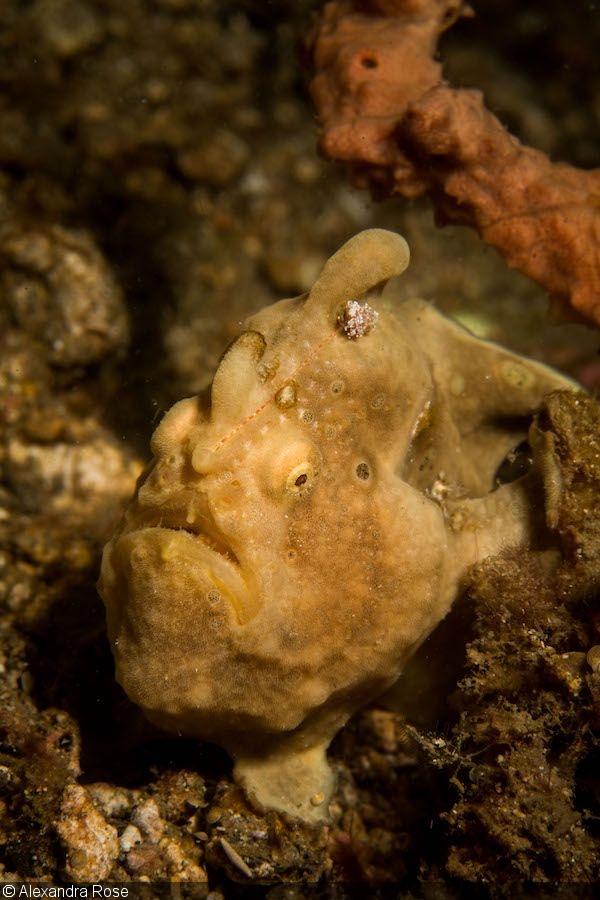 A frogfish beckons with its lure 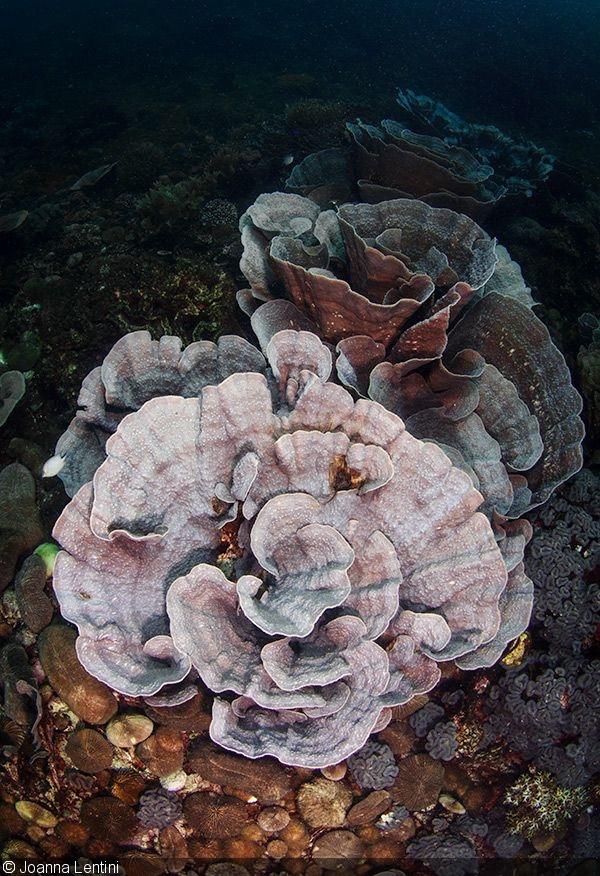 While I am a conservationist at my core, I truly appreciate it when I see a species, ecosystem, or some sort of natural capital fostering an economic value. It’s sad but true that we need to put a monetary value on such things in order to protect them. While it’s been done for entities such as sharks, mantas, and coral reefs, could the same also be done for muck diving? Could we place an economic value on a hairy frogfish or a flamboyant cuttlefish?

A marine biologist by the name of Maarten de Brauwer has been working on this very idea. Over my stay at Lembeh Resort, myself and other guests had the opportunity to sit in on a fascinating presentation given by the Belgian researcher. De Brauwer, who has made Lembeh Resort a base for his PhD project, presented a very valid case for the many benefits muck diving produces for local economies, and why these unique ecosystems should be revered and protected by local people and governments. 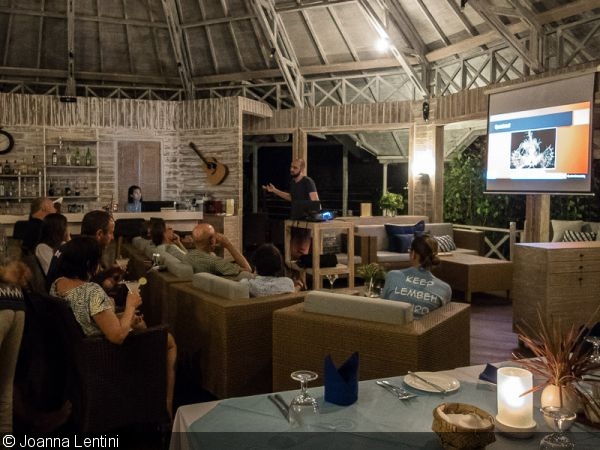 According to De Brauwer, this popular pastime brings in a whopping $152 million per year to just the countries of Indonesia and Philippines. He believes the figure is actually much higher as he only based the calculation off dive shops that specialize in muck diving; the number doesn’t take into account liveaboards or your typical dive center that frequents muck sites.

De Brauwer explained the demographic of the average muck diver and I was fascinated to learn that nearly 75% are underwater photographers with an average of over 550 logged dives. According to his research, muck divers are also well-educated high-earners who are willing to pay for the conservation of a species they travel to see and photograph. 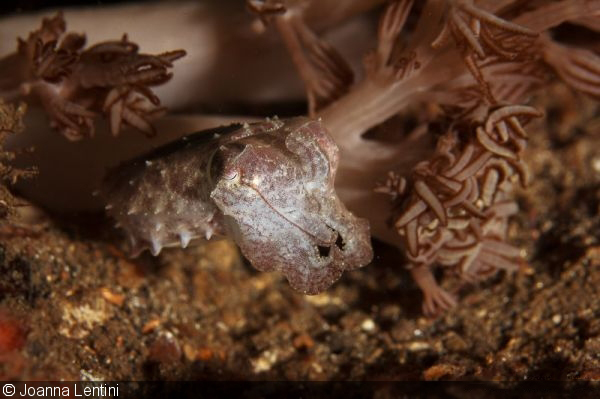 A miniature cuttlefish blends in to its habitat so well

For one reason or another, muck diving in Indonesia and the Philippines is usually found in remote areas of the country. And locals in such regions generally have very few choices when it comes to earning a living. De Brauwer explained that by replacing the average fishing job with a more sustainable occupation such as that of a dive guide, local communities benefit tremendously. He estimates that roughly $51 million per year is earned by muck dive guides—on average, more than three times the local minimum wage.

By the end of the presentation, it’s safe to say that the audience (including me) left with a much deeper appreciation and understanding for the need to protect the extraordinary critters we all travel to Lembeh to witness firsthand. One can only hope that with research like De Brauwer’s, tourism boards and local governments will begin to wake up to the economic value held by these “barren” sites around Lembeh and other macro meccas.

Of course, a trip to Lembeh wouldn’t be complete without ample time spent face down in the muck. And truth be told, I do believe my critter radar found its stride. I realize most divers are after the hariy frogfish or flamboyant cuttlefish but the most exciting encounter for me was the blue-ringed octopus, an alien-like cephalopod that has the capability to kill two dozen humans in a matter of minutes. Respect! 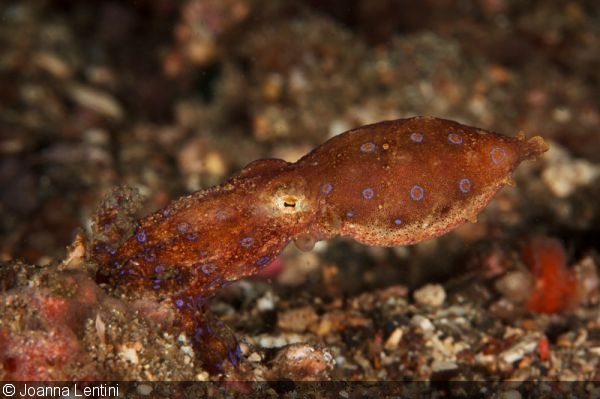 A blue-ringed octopus in the rubble at 65 feet

What if I told you there was more to Lembeh than just the muck and macro magic that you’ve heard about or even seen? Despite the fact that almost everyone who travels to the Lembeh Strait does so with the intention of scanning the sandy bottom for living, breathing treasures, I begrudgingly swapped my macro lens for a fisheye lens when the suggestion was made. Truthfully, despite my default wide-angle preference, here I was a little skeptical. I was in a macro wonderland and my macro lens was left sitting in the camera room. I was quite certain it was going to be a waste of my time. 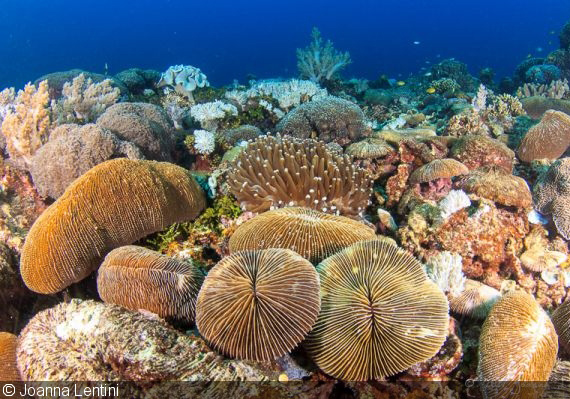 However, during the three days I spent diving with Critters@Lembeh Resort, I found the biggest surprise to be the wide-angle opportunities at one particular dive site called Serena Patah. While there were other beautiful wide-angle sites, Serena Patah blew my mind. Situated just inside the Strait, beside a mangrove forest, this site was the icing on the cake for me—and I couldn’t have been more wrong in my initial skepticism.

This dive site should be called “Candyland”—as it’s just erupting with colors, contours, and designs straight off of the children’s game board. Floating from one part of the reef to the next, I felt as though I was a part of the game. Mesmerized by the assortment of healthy, vibrant corals, which seemingly grew out of one another, I struggled with where to aim my camera! 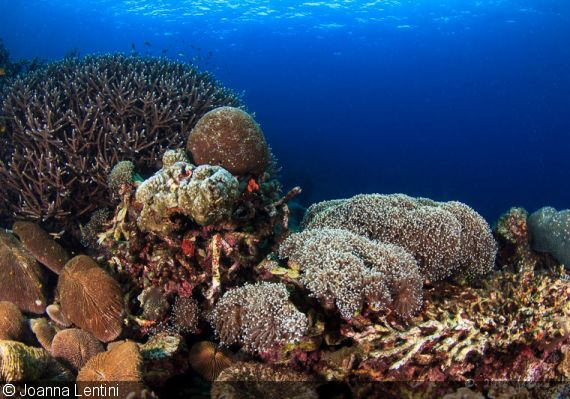 Not the typical sight you imagine you’d see in Lembeh

Realizing just how amazing the day turned out, I rushed back to Critters@Lembeh’s meticulously arranged camera room to recharge my batteries and snatch my SD card for a closer look at what I had recorded. I dashed to my Cliffside Suite at the top of the hill and popped the card into my laptop.

As the card was downloading to my drive, the infinity pool lights faded on and caught my attention. Outside the suite, an orange sherbet-colored sky and a setting sun over Mount Tangkoko bring goosebumps to my waterlogged senses. With a few minutes left on my download I allow temptation to guide me into the cobalt-blue tiled pool where I gaze out at the Lembeh Strait—wondering if I should pinch myself. 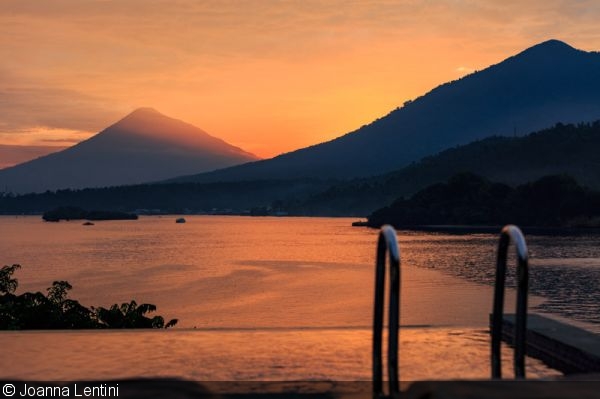 mateusz Dygowski wrote:
This is amazing!

Rogint Rogint wrote:
Great!
You must be logged in to comment.
Support Our Sponsors
Advertise With Us
Newsletter
Travel with us