Q & A By Joseph Tepper

The Los Angeles-based pet photographer was photographing a cavalier king charles spaniel in his backyard when Buster decided he’d rather jump into the pool to get his favorite tennis ball than be photographed. Casteel rushed to a store to buy a point-and-shoot underwater camera, zipped back and jumped in with Buster.

Fast-forward: His images have been featured everywhere from CNN to Good Morning America. In 2012, he released his first book, “Underwater Dogs,” which was the best selling photo book of the year and earned a place on the New York Times Best Sellers list. 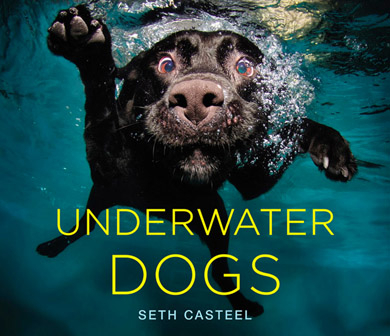 Recently, DPG talked with Seth about his love for the pooch and the pool:

SC: I had no previous underwater photography experience. Dogs were my interest and it just so happened that my pursuit of the emotion of dogs led me under the water.

In today's world, many dogs enjoy a pampered lifestyle: Sleeping in a king-sized bed with 500 thread count sheets, delicious treats, excellent health care, trips to the doggie salon, expensive toys. I believe dogs do appreciate these things on some level, but somewhere deep within, they also have wild instincts.

The water presents dogs with the opportunity to explore those wild instincts and they love it. This is why you see such a variety of emotions shining through in the photos. 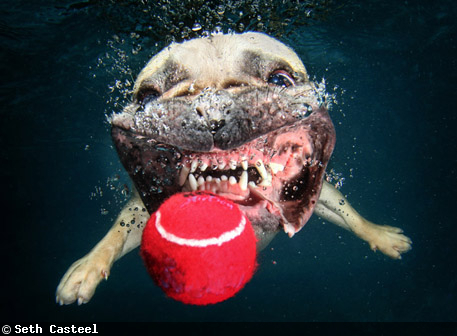 DPG: How do you get the dogs as much into the photo shoot as you are?

SC: The process starts on dry land. I befriend the dog and begin a game of fetch. Once we're friends, I simply move this game into the pool. I've designed a series of fetch-based games that we play and through the course of these games, I snap some images.

My rules are safety first, fun second. I'm super into the photo shoots, but I have to say that the dogs generally are even more into it than I am! When the photo shoot ends and the dog leaves, I often see the dog running back to the pool a few minutes later because they are not ready to go home. 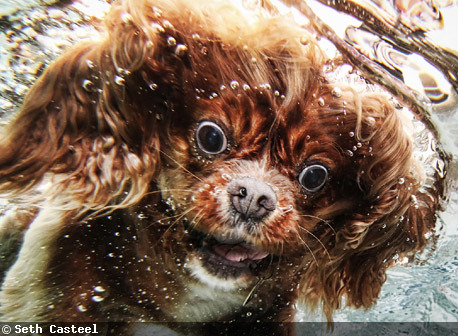 DPG: Ok so you’re ready to shoot—what’s the photo process like?

SC: The dog and I team up to make these photos, so friendship is key. The dog is always pursuing something that I have. I generally work only one-on-one with the dog. No other people are allowed to participate, as it can be distracting for the dog. 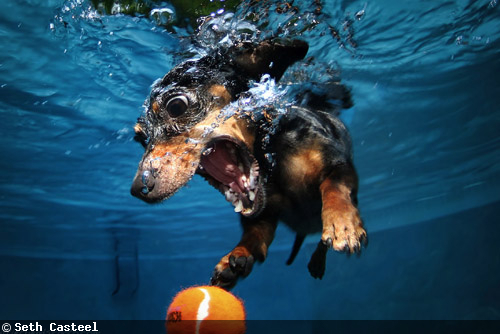 DPG: What kind of equipment do you use (housing, lighting, etc).

SC: I shot nearly the entire Underwater Dogs book with a Canon 7D, 580EXII, fisheye lens and a surf housing. These days I'm also using Ikelite housings with strobes. So many exciting options—the technology is brilliant! 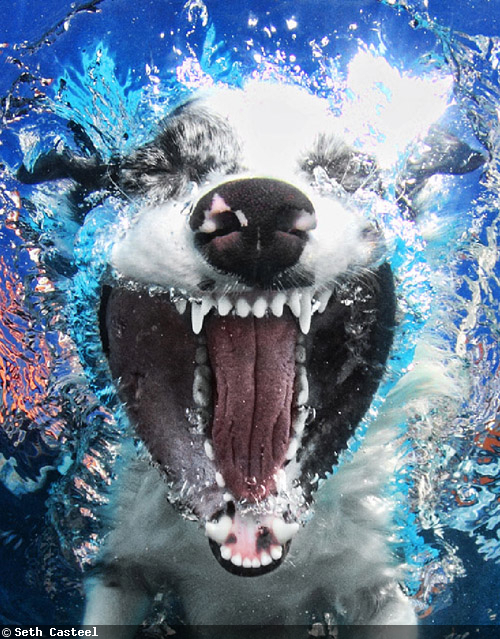 DPG: Do you do all your images in pools? Have you ever tried your method in the ocean or pond?

SC: Most of my images are done in pools in fairly shallow water. The trouble with natural bodies of water is the clarity. If the water isn't crystal clear, you are going to end up with cloudy photographs. I did do one shoot in the Puget Sound up in Seattle with some staffordshire bull terriers. The water was clear but green - the photos are so cool!! 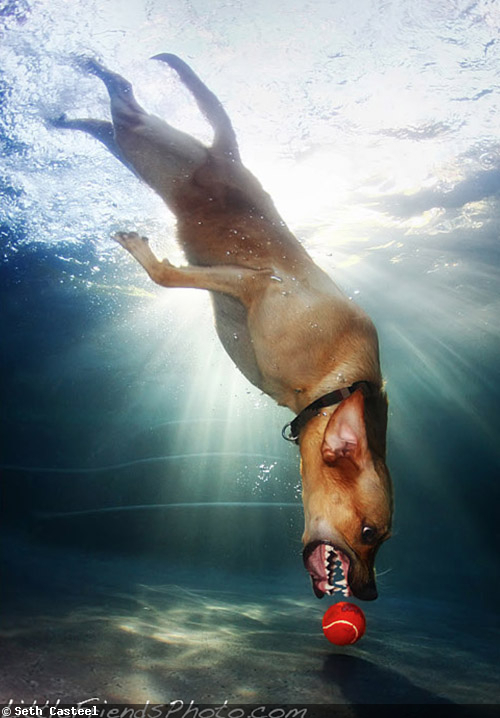 DPG: If you can give any of our dog-loving readers a tip to try with their own pooch, what would it be?

SC: All dogs know how to swim instinctively, some better than others. I believe all dogs should be introduced to water so they can build confidence for safety purposes. If you are dog is not familiar with the water, introduce them to the concept in a safe, positive way.

NEVER throw your dog into the water as this can be traumatizing and dangerous. It's also important that you teach your dog where the exit of the pool is so they know how to get out in case they fall in. As your dog begins to build confidence in the water, the opportunities for photos begin to emerge. 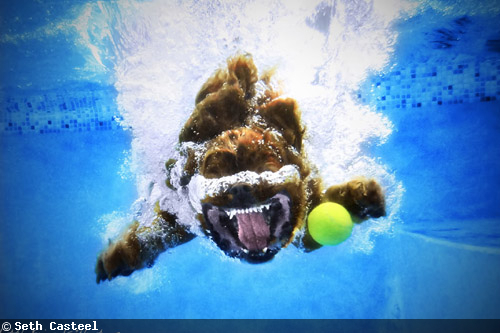 SC: Buster the cavalier is one of my favorite underwater gogs - and my favorite image is of him. That image is now a tattoo on my left arm.

DPG: I see you have a couple dogs of your own—do they get the same paparazzi treatment?

SC: My dogs have accepted the fact that they will be photographed every single day; although ironically, neither truly enjoys swimming or chasing toys. They'd rather pose on the couch. 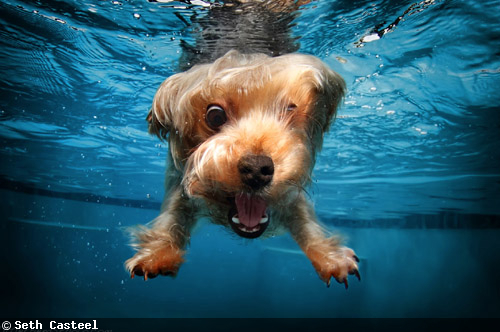 DPG: What accounts for the absolute variety of expressions in the images?

DPG: How did this rise to fame treat you? I heard you got so many hits overnight that it crashed your site!

SC: Rise to fame—haha. Well that is subjective! My website definitely crashed. It was a good problem to have. I feel very fortunate to have a career as an animal photographer. And I have dogs to thank for it! 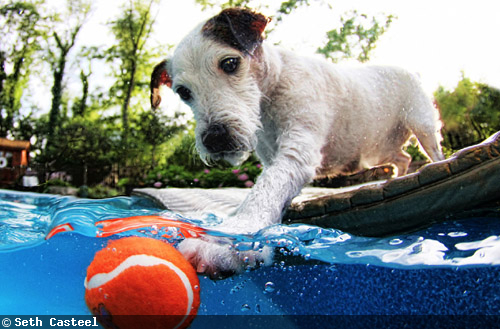 DPG: What went into the book? Was this a rewarding experience?

SC: Sixty-seven different dogs. Dozens of different cities and swimming pools. I worked with over 300 dogs in the course of making this book and I am extremely proud of every single dog that participated. The series is exciting because each dog is choosing to participate of their own free will. Dogs inspire us!

DPG: I know you got your start photographing rescue dogs.

SC: Yes - I actually got my start photographing homeless kittens. Because of the photos, they all got adopted which I thought was pretty exciting! I began volunteering at animal shelters all over the world, taking better pictures of dogs and cats to increase adoption rates.

I eventually started my own non-profit to teach workshops to other animal activists. Check out OnePictureSaves.com to learn more about the project. It's absolutely incredible to see so many staff and volunteers dedicated to improving the image of rescue and adoption! 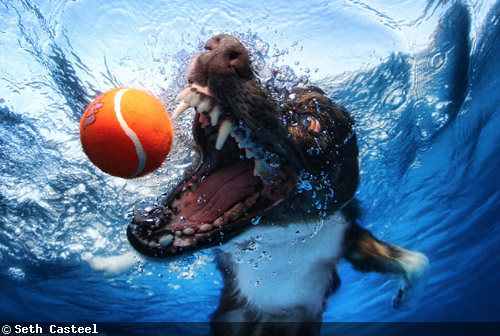 DPG: You’re not just into photographing dogs underwater—salmon for the New York Times, sea lions. How do you go from dogs to marine life?

SC: As Sebastian from The Little Mermaid once said, "Life under the sea is better than anything they got up there." Dogs are my passion, but I'm interested in all animals. And I love both the challenge that exist, and the opportunities available working below the surface! 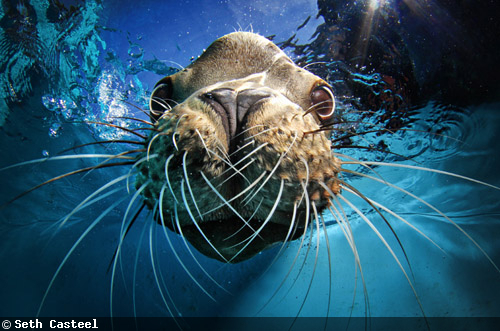 SC: My kids book, Underwater Dogs: Kids Edition, will be published this September! So many kids have enjoyed these photographs that we thought a kids version made a lot of sense.

The book features never-before-seen photos and rhyming text! I'm also currently shooting my forthcoming photography book, UNDERWATER PUPPIES! And I'm also the ambassador for OnePictureSaves.com to help improve the image of rescue and adoption here in the US and all over the world! 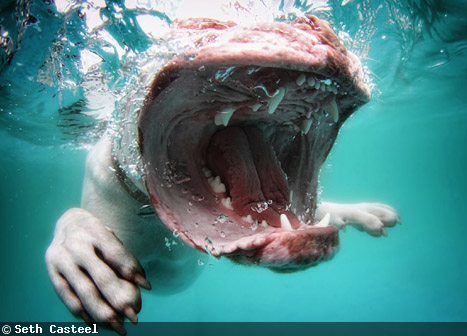