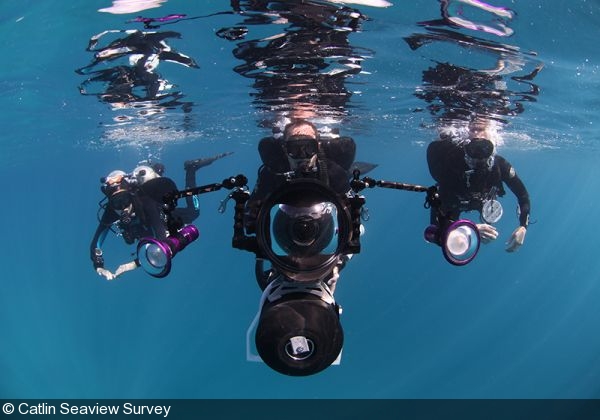 Imagine being able to dive into some of the world’s most biodiverse marine environments without having to leave your couch. Well, it’s not only your dream—it’s the mission of the Catlin Seaview Survey, a game-changing scientific mission to record the world’s coral reefs in high-resolution, 360-degree panoramic glory.

Kicking off in 2012 on the Great Barrier Reef, the survey has gone on to record reefs from Raja Ampat to Bermuda and the Galápagos. The group has brought the beauty and fragility of the Earth’s reef ecosystems to the forefront of the mainstream media through partnerships with NOAA and Google (that’s right, you can go on virtual dives from Google Maps).

We chatted with Catlin Seaview Survey’s Executive Director Richard Vevers and Senior Communications Manager Ben Glasson about the technological and photographic innovation that goes into creating a virtual record of our ocean’s richest environments. 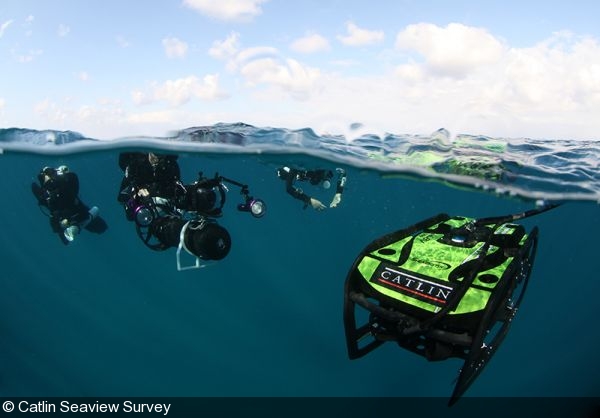 DPG: How did the program get started? What was the inspiration?

CSS: The project was born out of a need to reveal the oceans. I had been in advertising for 10 years before giving it up and becoming an underwater photographer. I saw first-hand all the problems going on and realized the biggest issue was the fact that our oceans are out of sight and out of mind. To me, this was an advertising problem, so I decided to bring together my old advertising colleagues, and we started a not-for-profit called Underwater Earth with the mission of “revealing the oceans to protect the oceans.”

DPG: Talk a little bit about the scientific purposes of the survey.

CSS: Our sponsors Catlin Insurance were the ones that turned the project into a scientific study. They wanted the project to be more than just an engagement exercise—they wanted it to based in science. It was Professor Ove Hoegh-Guldberg who saw the scientific potential in what we were doing. Existing methods of surveying underwater environments were expensive and slow. Almost by accident we had invented a way of revolutionizing the scientific recording of underwater environments that was fast, accurate and cost-effective. The plan is to create a global scientific baseline of underwater environments—starting with coral reefs—that can be used to accurately assess their current state and also monitor change over time.

DPG: How do you go about choosing the sites for the survey? Is it more scientifically or photographically based?

CSS: The locations chosen are mainly scientifically based. Sites are selected by our science team, who are from the Global Change Institute at the University of Queensland. Our current focus is on coral reefs. The sites selected give us a representative study sample for each of the six coral reef regions of the world. This is so that we can create a global baseline that can be used to monitor change on a local, regional and global basis. 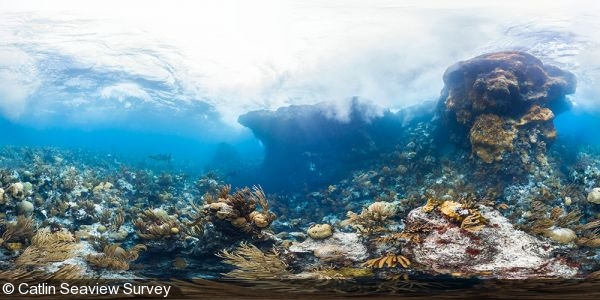 Bermuda reefscape as captured by the SVII-S camera

DPG: What special photographic equipment is involved in the surveys?

CSS: Our SVII camera is our critical piece of survey equipment. It was specially developed for the project.

DPG: How do you use the equipment? What’s the photographic technique?

CSS: This camera takes high-resolution 360-degree images every three seconds and is propelled by an underwater scooter. It is important to control the ISO and speed of the photographs taken by the three separate cameras that fire simultaneously. This is done remotely using a specially developed app on a tablet in an underwater housing that is attached to the SVII rig. 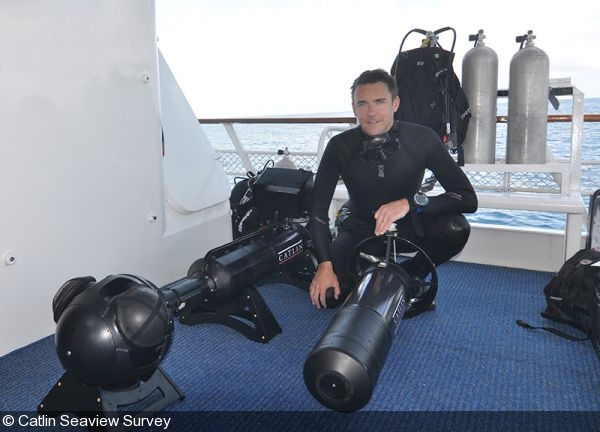 Richard Vevers with the SVII camera

DPG: What about post-processing—stitching the images together?

CSS: We have created our own image lab facility to process the hundreds of thousands of images. The team takes the GPS reading and time-matches it to the individual images, which are then stitched using our own software. The tilt and direction are corrected based on information collected by loggers, and an equirectangular image is produced. This can then be viewed in various formats, including the popular 360-degree spherical projection that gives a “virtual dive” experience.

DPG: How do you use the images for scientific purposes?

CSS: We currently use the downward-facing images for scientific analysis. This image is automatically analyzed using software developed by the Scripps Institution of Oceanography in the US. This was developed from CIA face-recognition technology and allows us to identify corals down to the species level. Without the automated image analysis, it would have taken decades to analyze all the imagery. This process means that we can accurately access reef health and biodiversity of all the locations visited in a just few days. 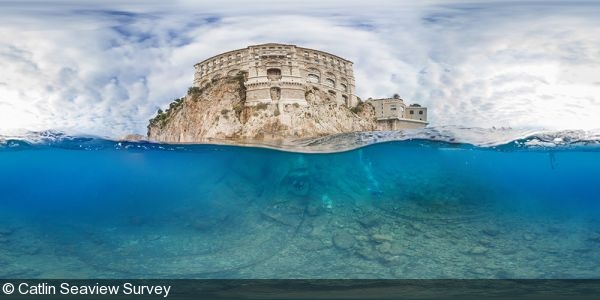 DPG: Saw the images on Google Maps—how did that come about?

CSS: This projected started as a mission to reveal the oceans. If you are going to do this on a meaningful scale, you have to partner with Google, as they have both the platforms for showcasing the imagery and also a huge global audience. Google have been extremely supportive of the project from the start and were very keen to showcase the imagery in Google Street View and on other platforms. 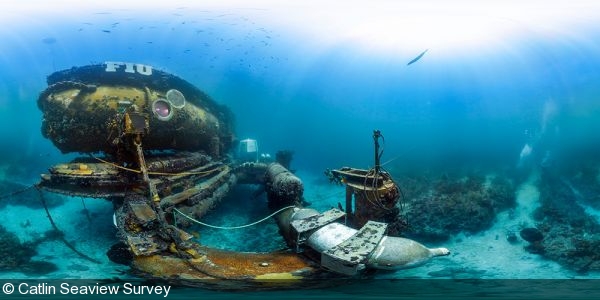 DPG: Speaking of mainstream Google maps, how do you think the interactive beauty has the ability to reach a wider audience?

CSS: Ninety-nine-point-nine per cent of people have never been scuba diving, but they can now experience the underwater world on a “virtual dive” in Google Street View. One billion people a month use Google maps, so by making this unique imagery available through Google, we are able to engage people with our oceans on an unprecedented scale. The only way to protect the oceans is to reveal the oceans so that people care. We have the opportunity to do this for the first time through Google Street View.

Florida’s Carysfort Reef in 2014. The health of the reef has declined dramatically in the past 25 years.

DPG: What’s next for the survey?

CSS: We will keep working with broadcast teams like National Geographic, CNN and IMAX to reveal the state of our oceans to TV/film audiences. We are also working on pushing the technology further so that we can invite citizen scientists to help us analyze the hundreds of thousands of panoramas that the survey is collecting and even help with the data image collection.

We've just announced a collaboration with NOAA to begin to reveal the National Marine Sanctuaries of the USA. Also, we’ve wrapped up our 2013 Caribbean and Bermuda activity and commenced 2014 survey work focusing on the epicenter for the world’s corals—the Coral Triangle. It’s another incredibly busy and exciting 12 months here!