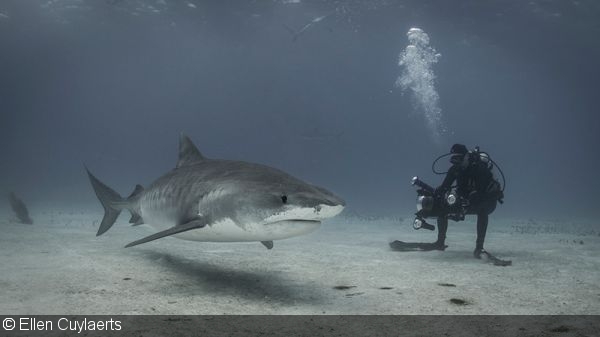 In underwater photography circles, Michael Maes may be better known as the significant other of acclaimed shooter Ellen Cuylaerts, but in just a few short years, Michael has carved out a successful career as a wildlife cinematographer, recognized for a portfolio—both underwater and topside—focused on the behavior of some of the planet’s most formidable big animals.

His passion for educating the public about environmental issues has taken him from the tropical climes of the Cayman Islands, where he’s based with his wife and children, to the freezing waters of the Arctic to film polar bears and killer whales, and document the effects of climate change for the expedition “Elysium – Artists for the Arctic.” For his most recent project, he teamed up with his wife and dive buddy to produce a completely different kind of wildlife documentary, a story that is woven with family challenges, fear conquering and environmentalism.

DPG caught up with Michael to talk about how he got into movie making, shooting in the extreme conditions of the Arctic, and his newly released documentary, Epiphany. 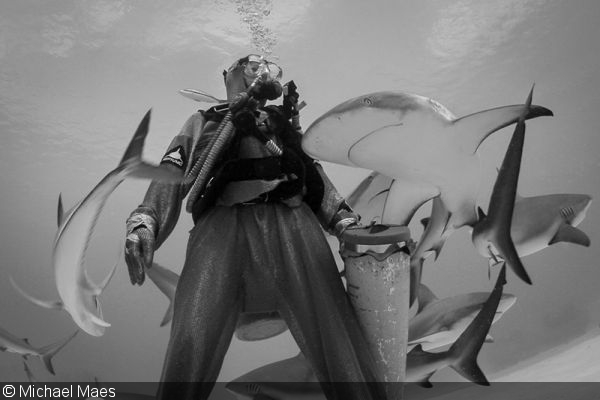 Ellen feeds the sharks during the filming of Epiphany

DPG: Give us some background on your history as a filmmaker, and what drew you to the underwater medium?

As a kid, I was fascinated by my father’s Eastman Kodak 8mm and Bolex Super 8 film cameras, though he didn’t allow me to actually shoot with them. Instead, we spent many Sunday afternoons watching ourselves running around on the silver screen, every now and then suddenly stopping, smelling burning, and seeing ourselves evaporate to bright white—the charms of old-fashioned “pellicule” projection! Later, in my teens, I got all my savings together to buy a Panasonic video camera. That was a huge and heavy beast, capable of far less than a GoPro these days.

For some reason, I got side-tracked into computers and ended-up in IT for the next 20 years, completely alienated from cameras, until my wife, Ellen Cuylaerts, forced me to take a break from my 100 hours/week, 50 weeks/year work schedule and “tricked” me (back) into diving. I got myself a GoPro because I wanted to keep it simple, but I soon felt limited by its capabilities and upgraded to a Nikon D7000. It made me think up front about my dive: My “dive plan” became “a shot list.” Equally, shot lists turned into short films.

Being compelled by better image quality, I stepped into the RED arena with my first Epic MX, a 5K cinema camera. That was a huge learning curve and, back then, the Epic wasn’t really ready for underwater work in specific conditions. Through much frustration and perseverance—or stubbornness—I finally managed to understand and control that beast. These days, I shoot on their latest technology, the 8K Helium S35, and I am waiting for my 8K Vista Vision, which I refer to as a “Hasselblad shooting 75 frames per second.” 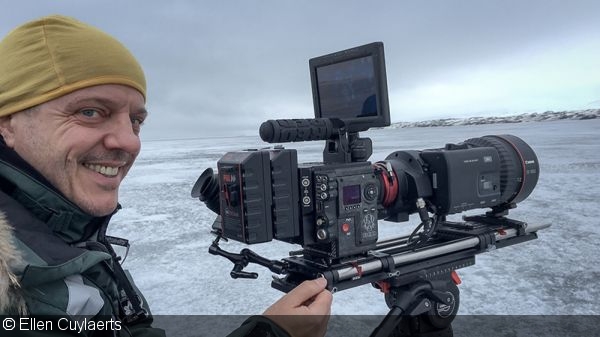 DPG: You and your wife, Ellen, have been spending some serious time in the Arctic lately. Tell us what first drew you to this remote and frigid part of the world.

Another challenge by Ellen: filming beluga whales in Churchill, Canada. The congregation of belugas in the south part of Hudson Bay occurs early summertime. But when I was there it was exceptionally hot, reaching 89°F (32°C). So my first Arctic chill wasn’t too bad at all, and I still felt like that tropical underwater filmmaker. That was until I met a polar bear in the water on our way to the belugas. I was immediately enchanted by that beautiful animal and decided I would return as soon as I could to film polar bears.

Only two months later, I was back in Churchill—which had become a ghost town as the beluga season was finished—searching for bears. Ultimately, I found a mom and cub, which I tracked for 10 days. Many of those moments are carved into my memory forever. It opened up an entire new world to me. 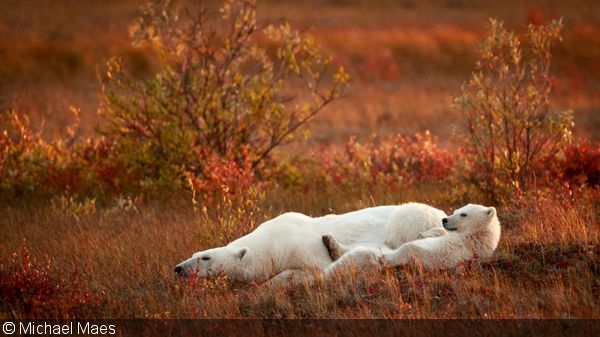 A polar bear mom with her cub, Churchill, Arctic

DPG: What are the biggest challenges of shooting in Arctic conditions?

Apart from the obvious—extreme weather conditions—logistics and finding your subject complete my top three. The Arctic is an enormous area with not that many animals around. You need to be very well prepared and work with knowledgable locals to improve your chance of success for that encounter you have to shoot. Finding the animal is imperative of course, but even when you do, the weather in the Arctic is so unpredictable and changes in a blink of an eye.

So having every piece of the puzzle come together requires many iterations: You often have to go back repeatedly. To put this in perspective, two years ago I spent one month on a specific location in the High Arctic, a period when there is a regular beluga whale migration at that location. I didn't see any belugas! That was a good lesson in humbleness: Don’t take nature for granted.

Polar bears take the term “apex predators” to a complete new level. Nothing in the underwater world comes close to a polar bear, not even a sperm whale. Polar bears are the only large mammals I know of that not only kill for food, but also for pleasure. They are colossal, extremely powerful and very agile. By the time they charge, you have no time to react—it’s “game over.”

You must have safety guards when you’re on the ice and you need to be extremely flexible, ready to “set up or run” at any time. The last thing you want is that the polar bear would get into trouble because of a mistake you’ve made. This is very difficult with big cinema cameras and 20-pound cinema lenses. Additionally, you have to deal with –40°F, blizzards, thin ice, breaking gear—all at the same time as knowing exactly what’s happening all around you.

But the encounters are very rewarding, even more so than underwater—apart from maybe orcas.

DPG: Your latest film, Epiphany, is a melding of conservation, wildlife, and family. What inspired you to create the film, and what did you learn along the journey?

When Ellen and I attended a fundraiser at DEMA in Orlando back in 2013, we bid on a “shark feeding course” by Cristina Zenato. It was my intention to film Cristina—who is arguably the most-recognized shark advocate around the world—at work. That would have been my engagement point into a 100% “shark conservation documentary.”

Due to difficulties scheduling the shoot, we realized we had to let go of filming Cristina. That’s when Ellen suggested a unique angle: a story about an “average” housewife—mother of two autistic children, afraid of water, fearing sharks. After all, if such a person could conquer her fear for water and sharks, anyone could. Ellen started drafting the script on a plane to Tiger Beach the very next day. I was sold in a blink of an eye after reading it.

As producer, I was still focused on the “shark conservation” of the story, but accepted the extras on autism, personal growth, etc. When, along the way, the other focus points became more and more important, I failed to see, as producer, where these would help the conservation message of Epiphany. That became, probably, the biggest “battle” between Ellen and me. As I kept on failing to see the added value, I just trusted her judgement and let it go. I guess that was the most important moment during the production, which resulted in a raw, honest and pure—“straight from the heart”—feature film. 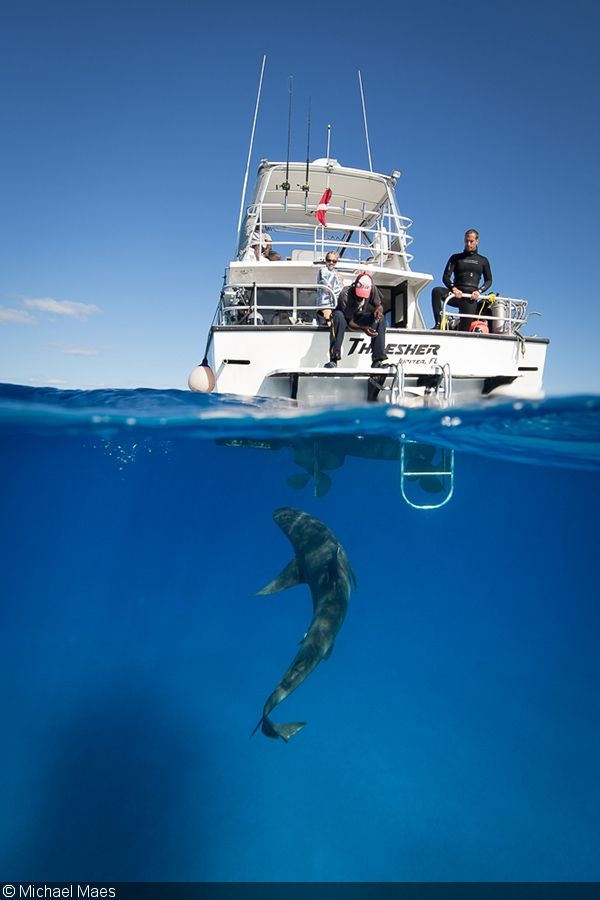 An oceanic whitetip investigates the boat during filming at Cat Island

DPG: Your wife is a tour de force in her own right within the underwater image-making community. How have you two influenced one another in your work, and how do you balance individual travel, projects and family?

We are both perfectionists in what we do, whatever it is we do. As such, we keep on informing ourselves, studying, practicing, experimenting. We did quite a bit of the “learning trip” together before we branched off into our respective fields of expertise. During this learning process, we constantly challenged each other, compared our ideas and results. As we were also dedicated diving buddies and did most of our dive trips together, we shot the same subjects under the same conditions.

Back then, I still did both video and stills. Though I was good at video, it frustrated me more and more I could not nail the same emotion with stills as Ellen did. She told me many times to choose one or the other. It took me a long time and much frustration, but it was a relief when I decided to finally quit stills. That was the last hurdle that prevented me from becoming the cinematographer I am today. I now think completely in “moving images,” which makes me better at capturing animal behavior. I have to thank Ellen for this, for making me choose between movie and stills. 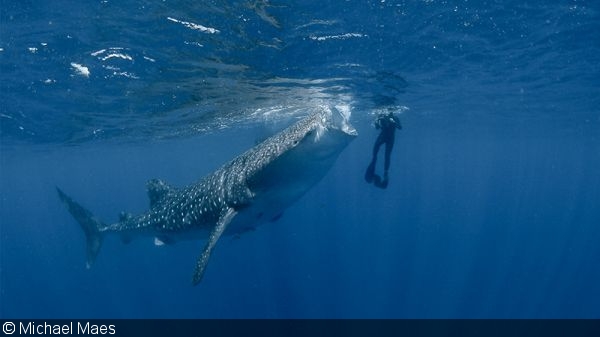 Ellen interacts with a whale shark off Isla Mujeres, Mexico

Most of the filming we do abroad is during true expeditions: We walk the unwalked paths. These are fully private charters with challenging logistics. That’s why we travel a lot together. Once a year we gently “force” our children to tag along, which makes them experience areas where very few people have been. Those expeditions are a “school of life” for them. The last few years, our areas of focus have also split, where I spend more time documenting the Arctic, and Ellen works on Ascension Island, a tiny island in the Atlantic near the equator. Those are expeditions we do solo.

Having our individual projects now, we still talk a lot about them and share our opinions. I find this quite interesting, since, for example, I have become a spectator of Ellen’s Ascension project. Doing these spin-offs individually makes our marriage even better. I cannot put it in words, but somehow it makes the experience of exchanging ideas even more intense. 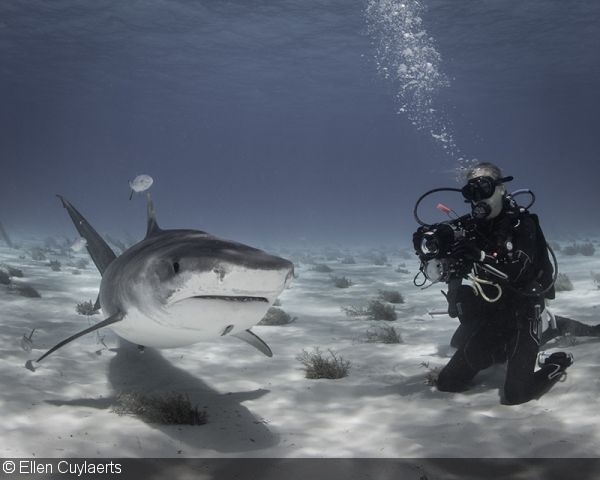 DPG: What’s your next project?

I am working on a documentary about climate change from the Arctic perspective. As a solo cinematographer, this is a difficult goal, as getting the right shots in those extreme conditions is tremendously difficult. You have to go back over and over again. So it will take a few more years before it’s finished. I’m now in the process of getting a good scriptwriter, which I might have found in a good friend of mine.

Other than that, both Ellen and I are itching to make another wildlife documentary together. The first thing we agreed upon was neither of us would be in front of the lens again! 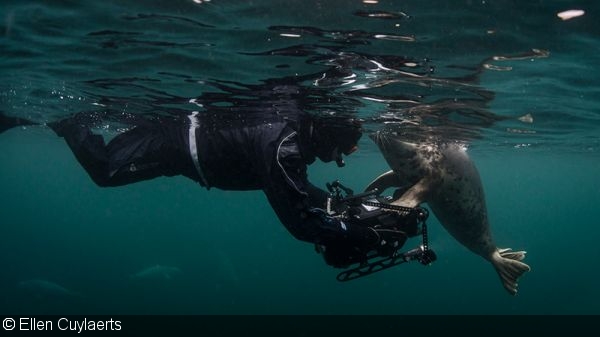 Michael gets some film tips from an inquisitive seal 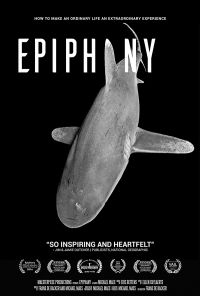 About Epiphany: When Michael and their two children are diagnosed with autism, his wife, Ellen Cuylaerts, sets about the massive challenge of imparting understanding about the condition amongst their peers. In order to relieve the societal pressure, Michael and Ellen decide to move to the Cayman Islands, where they find relief and meaning in diving, photography and environmental activism.

In their newfound niche and connections with misunderstood animals like sharks, Ellen finds acceptance, community and purpose. The parallels between her two unknown worlds might just be the key to help her work through the challenges she faces in society and at home.

Michael Maes’ documentary Epiphany is available on iTunes to rent at $0.99 or purchase for $11.99.

Ringart Ringart wrote:
Nice!
You must be logged in to comment.
Support Our Sponsors
Advertise With Us
Newsletter
Travel with us