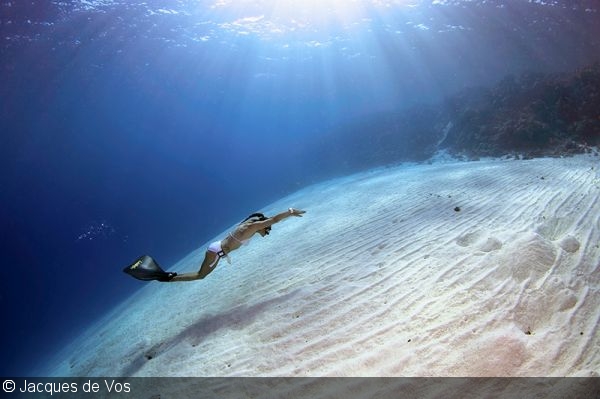 It’s inevitable: Freediving photography is here to stay. But that doesn’t mean the tank must be abandoned completely, for there are advantages and disadvantages to both approaches; however, embracing this new challenge comes with a fresh realm of creative possibilities.

Whether it is fluidly swimming with big animals or seamlessly traversing the water column, shooting capabilities are greatly broadened. And there are perhaps few others in the world who are as familiar with this concept as Jacques de Vos, who is one of today’s most talented and widely known breath-hold photographers. 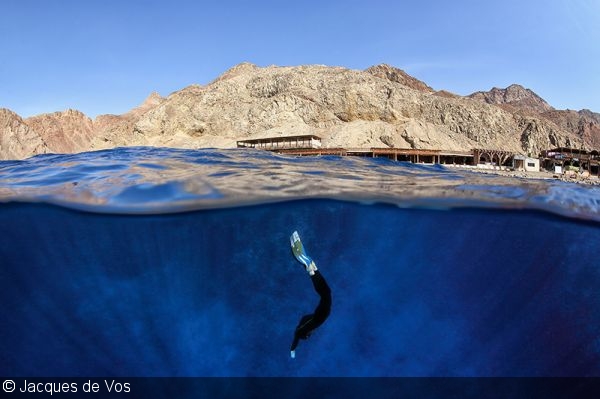 A freediver descends into the Blue Hole of Dahab, Egypt against the backdrop of Sinai Desert mountains

Jacques de Vos: Photography came quite a few years before I started any formal freedive training, although I spent most of my “formative” years behind the camera underwater while scuba diving and snorkeling. Once I got more serious about freediving, it was quite an easy transition. 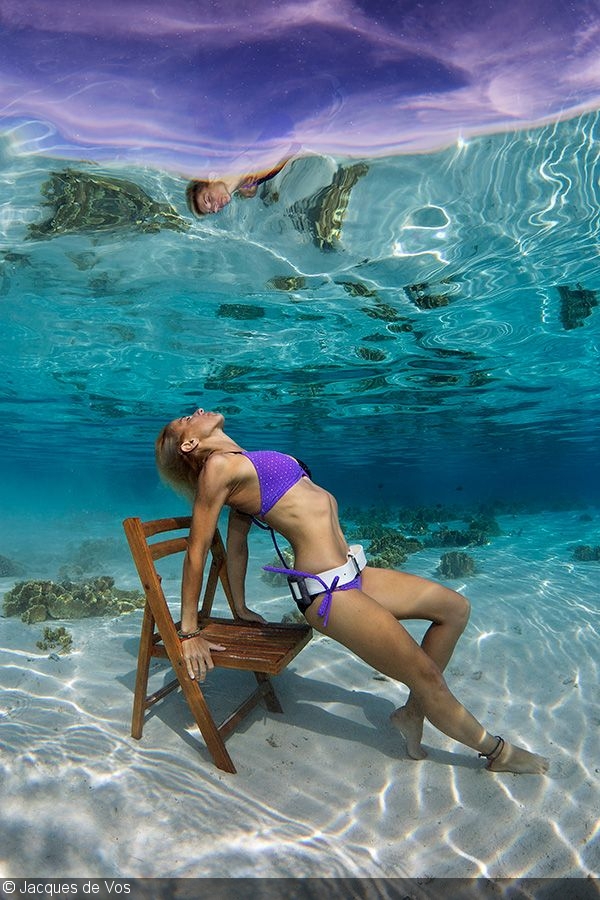 Lyndsay Bilodeau modeling in a lagoon near Dahab, Egypt

DPG: Tell us what makes shooting on breath hold so unique.

JdV: There are several benefits over doing it while scuba diving, and one of the biggest for me has always been the dynamic advantage of movement in the water column. This means being able to ascend and descend as much as you’d like in a session, which allows you to shoot at varying depths or even at the surface when needed.

Additional advantages include closer interaction with marine life (less noise), greater ease of movement due to significantly less equipment—which also adds speed. This is ideal for tracking or swimming with subjects when needed.

Underwater photography while freediving is also bit of a double-edged sword. Dives are limited by your breath hold, so shooting macro and waiting for an octopus to finally poke its head out of its hole can turn into quite an intense waiting game. Technically, it is also a little more challenging when shooting manual as your depth changes quite rapidly, which means varying exposure settings in one dive. 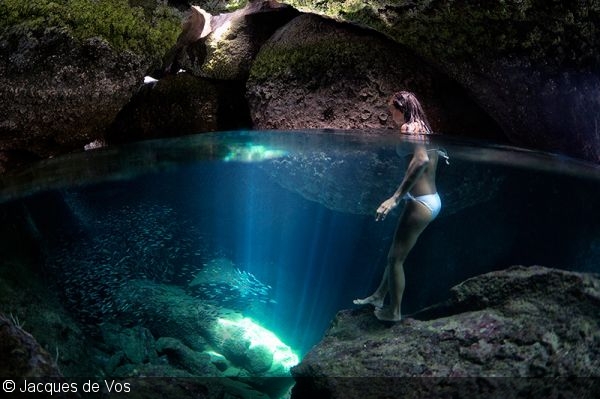 A small underwater cave near Koh Tao, Thailand gives shelter to a small school of fish

DPG: Taking those challenges into account, how do you adjust technically for your subject matter?

JdV: Given my love for and time put into wide-angle underwater photography, I’ve developed quite a good sense of which settings I might need for particular situations, and I will dial this in before heading down. Two things I rarely change once leaving the surface are the aperture and ISO, which means small adjustments for exposure are mostly made with the shutter speed. On deeper dives, I might need to dial the ISO a little bit higher to keep the minimum shutter speed within acceptable limits. The only additional changes I might make are related to flash power although even this is now easily managed automatically when using Ikelite’s built-in TTL system. 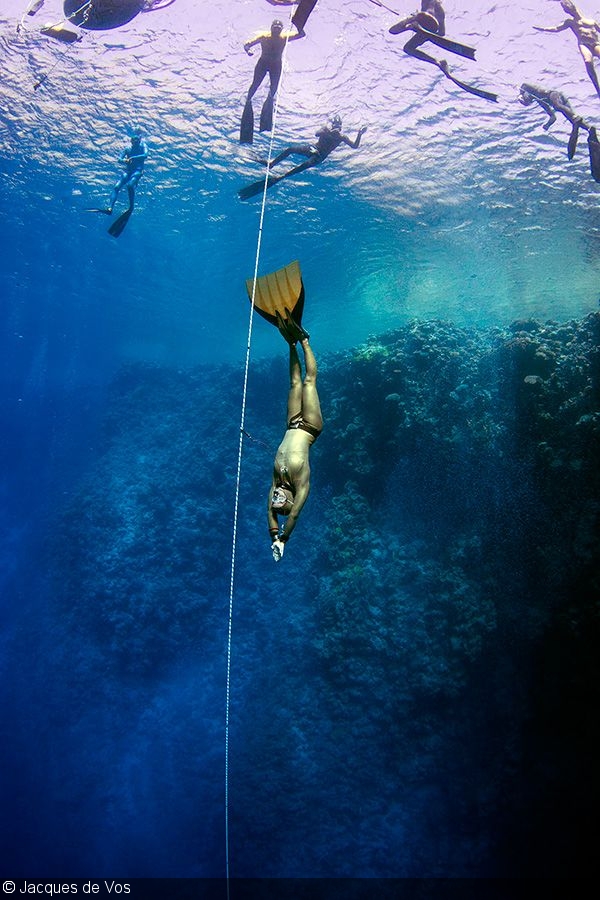 DPG: Is there a big difference between shooting stills versus video while freediving?

JdV: One of the big challenges while recording video as opposed to shooting stills while freediving is quite often getting stable footage while moving. When pushing the camera through the water, you are actively finning and this easily translates into movement or wobbles in the footage. The best advice I could give to avoid this is to try and keep both hands on a camera fitted with a proper tray and handles at all times. Something that is definitely a huge advantage is being able to equalize (or clear) your ears without having to pinch your nose, but this is unfortunately not a skill everyone can perform naturally and it is not easily learned. 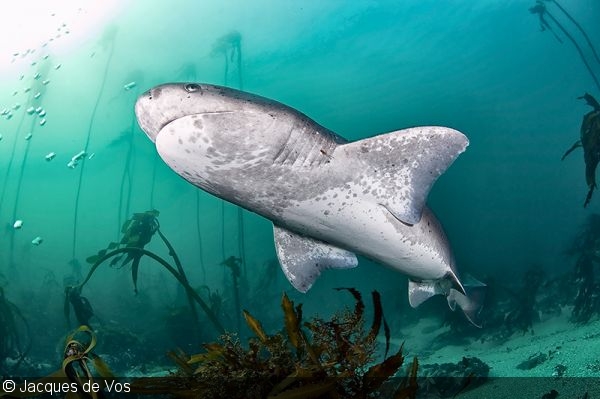 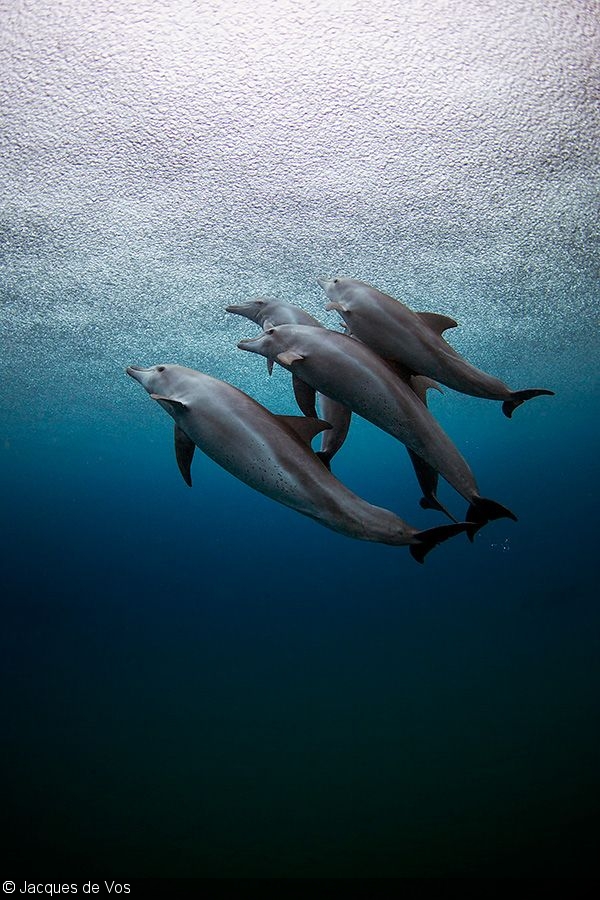 Dolphins under a rainy surface on the coast of Mozambique

DPG: What is it about big marine animals that makes them your favorite shooting subjects? Do you identify with big animals and emulate their movements?

JdV: There is something very special and humbling about being in the water with an animal far superior to you in its natural environment, and I definitely draw a lot of inspiration from this. When interacting with these animals, I find that I do adjust my own technique slightly to “fit in” as much as I can while still considering the safety of both the animal and myself. In some cases, I also try to appear as interesting as possible to get more attention, be it from seals, dolphins or sharks—which might look a bit ridiculous to a spectator! 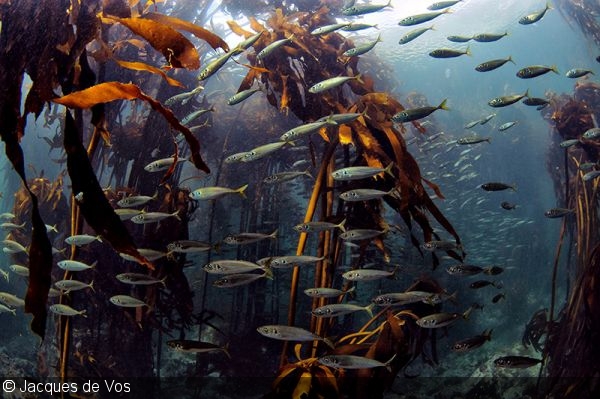 DPG: Your images are often characterised by bold colors. What techniques do you use to make the best use of color?

JdV: The only real secret to great color is shooting with the right amount of light. Most people remember from their school days that we perceive color when the different wavelengths composing white light are either refracted, absorbed, reflected, scattered, or diffracted on their way to our eyes. If you have enough light in your original image then you can be sure you have the colors in there too even if it looks like three shades of blue. For this reason I tend to always shoot with strong strobes (the Ikelite DS-161 is a brilliant option) to illuminate the subject where applicable and try to allow for as much natural light for the background when needed.

When editing, I always make sure I use properly color-calibrated displays, and beyond that I’ve developed quite a unique style of color correction to extract the natural colors from the image while at the same time making everything pop. 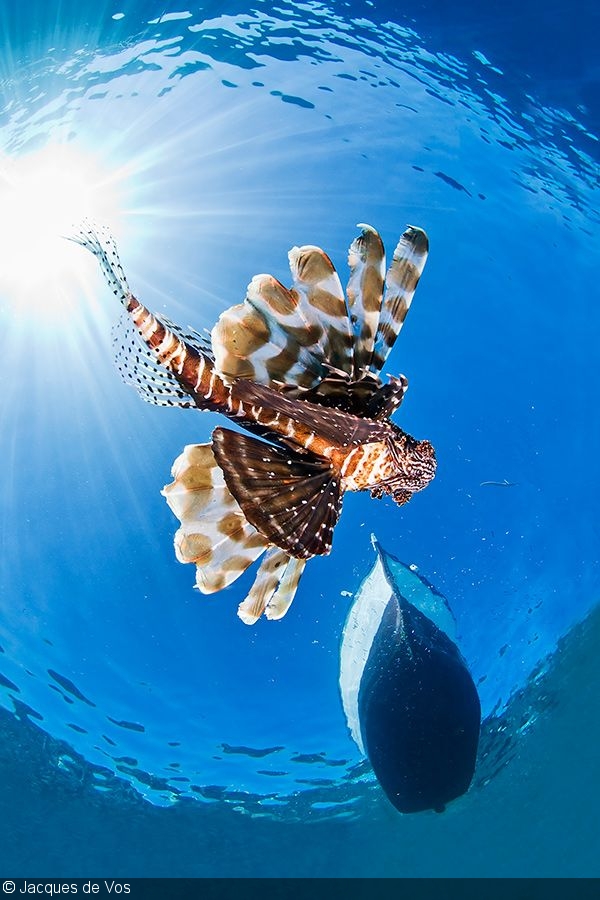 A lionfish passing underneath a fishing boat in Dahab, Egypt

DPG: Freediving is becoming more and more popular. What advice would you give to those who are ditching the tank but holding onto the camera?

JdV: First and foremost, it is important to get some form of formal training through a reputable agency to understand the proper technique associated with freediving in order to enjoy safe and comfortable dives. With freediving fast becoming one of the biggest water sports in the world, more and more people without any certifications are claiming to be “professional” freedivers or instructors, gladly taking your money for some pointers. It is best to avoid these.

As with most underwater photography, the best thing you could possibly do to begin with is to spend as much time as possible behind the camera underwater. In addition to this helping you become a more confident freediver (with a camera) and developing your “eye”, it also familiarises you with the layout of your system, which is critical when having to make quick adjustments on a single breath. 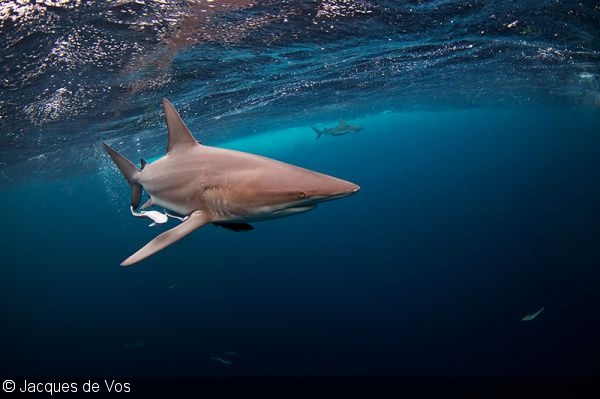 An oceanic blacktip cruising just below the surface on the Aliwal Shoal near Durban, South Africa

About the Interviewee: Jacques de Vos is an Ikelite Ambassador and has won several prestigious international underwater photography awards. His photography has been published worldwide in several books and publications. Jacques now also works as a camera operator on major projects for companies such as the BBC, Epic TV and Red Bull. His underwater video is currently featured in the international 2015 Ocean Film Festival documentary “Oceanminded”. When Jacques is not shooting underwater, he works as a Freediving Training Director with the world-renowned Freedive International. He also holds qualifications as a scuba instructor and commercial diver. www.jdvos.com