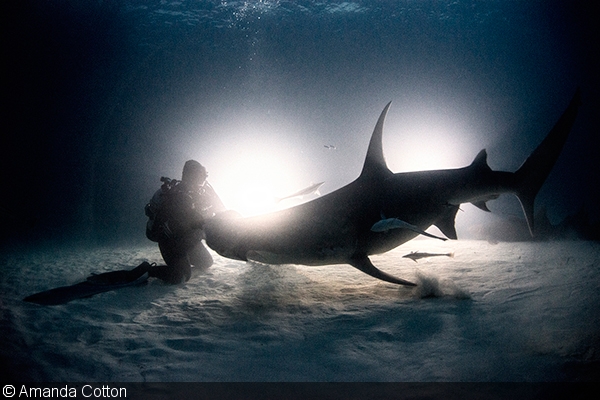 A hammerhead in the spotlights at night

Photographer, and member of the Women Divers Hall of Fame, Amanda Cotton is known for photographing animals with big teeth. With the growth in popularity of shark dives in particular, we decided to sit down and talk to her about her experiences diving with these rapidly disappearing animals.

DPG: Let’s get right to what people always want to know: Aren’t you afraid?

I have never found myself fearful when I am in the water with sharks. I think I am more fascinated by the way they move through the water, the way their bodies glide with grace and strength—it’s captivating. I am cautious and know there is a way to act and react in specific ways when around sharks. Understanding shark behavior helps to squish any potential fear as well.

I think the time I am ever fearful in the ocean would be when I am at the surface without any gear, including a mask. If I am 100% honest, there is something a little uncomfortable about being at the surface of deep, dark or murky water without the ability to see what is beneath you—no matter how much of an ocean person I feel I am. 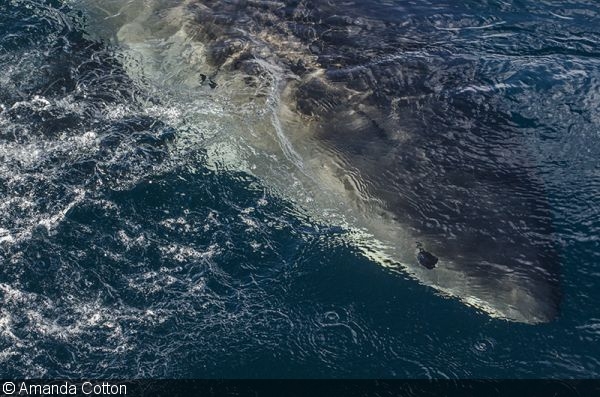 The best way to experience sharks? Under the water in their domain

DPG: What is the biggest shark you’ve ever seen?

Undoubtedly, the whale sharks of the Galápagos—they are massive. The last time I was in the Galápagos, I was there in August when the heavily pregnant females come through. They were so big, far bigger than the ones we typically see at Isla Mujeres during the summer aggregation and so close to giving birth, you could see the pups moving around inside their bellies when you swam up alongside them. It was pretty amazing to witness.

DPG: Tell us about your first experience with sharks

It was when I was a little girl. We were at the beach with my family. I was swimming out just beyond the break with a close friend of mine, and we noticed a large fin moving in our direction. Neither one of us knew what it was and didn’t think it was a shark at first. When it got closer, we thought it was a whale, since we were such little kids, but we later were told it was a basking shark. I remember at the time being completely fascinated by the size of it and how it was moving so slowly and being sure of the fact it was a whale. I think I was eight years old at the time. Funny how kids’ brains work! 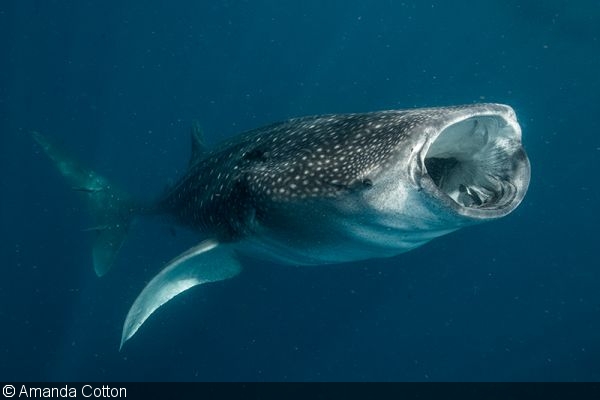 DPG: You seem to like animals with big teeth that most people think are dangerous. Where did that come from?

I have always been drawn to things that are dark, unusual, different, considered ugly or scary. I tend to question everything, to the extent of being annoying about it, ask anyone who is around me for any length of time. So I’ve wondered why we perceive certain animals to be scary or ugly and wanted to challenge that mindset by showing them in a different light. My favorite photographers and filmmakers focus on shifting the accepted concept of beauty; it is what I appreciate most about their work. Taking inspiration from their work, I hope to be able to do the same, to a certain extent, with the images I create.

I’ve also enjoyed adventurous and obscure experiences. When I started diving and shooting underwater, I enjoyed the idea of doing something perceived as being outside the norm. I’m not sure you can still say that about diving with animals like sharks, crocodiles and the like now—nevertheless, I will always love doing it. It is just as much about the connection to the ocean, and the disconnect from society and humankind when I am in the water that makes time with these animals so special to me. 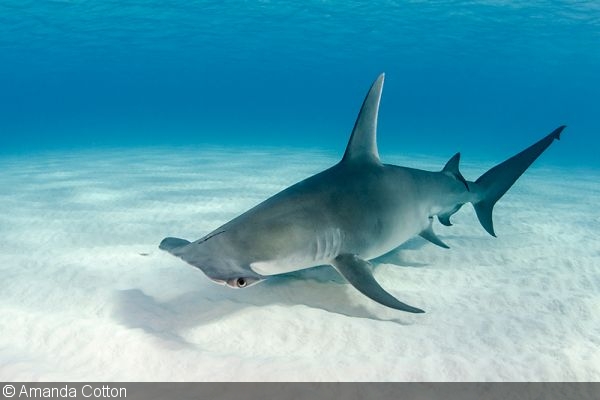 DPG: Has there been any single dive that stands out for you?

One of the most memorable experiences I have had in the water was with my dear friends Debra and Vincent Canabal, owners of Epic Diving—a  shark diving operator based in the Bahamas. We had encountered a large male dusky shark with a rope deeply embedded around its body during one of my group A Cotton Photo Oceanic Whitetip Shark Expeditions a few years ago.

The fantastic group who joined us that week gave up their water time during one afternoon so that Vinny, Debra and myself could attempt to cut off the rope from the shark. After several attempts to save this shark, we knew it was the only way it was going to survive. Vincent was able to use surgical shears to cut the rope, and the shark rolled out of the rope as if it knew what it needed to do to free itself. There was quite a bit of commotion right after, with oceanic whitetips and reef sharks milling about, but the dusky was free. The dusky, who we named Atlas, went on to recover completely from the rope wound and has been seen in the years since. It was a great feeling knowing everyone worked together to save this shark. 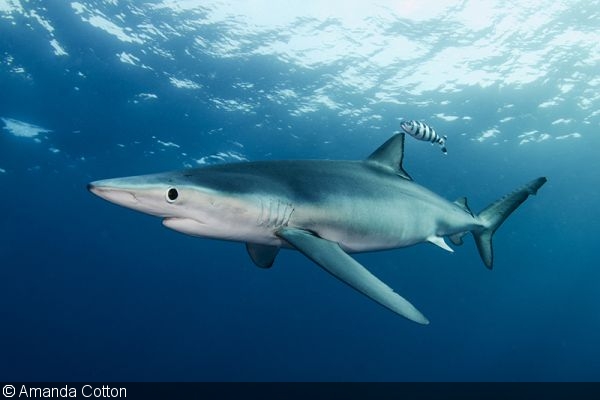 Blue sharks are found in tropical and temperate oceans

DPG: Do individual sharks have personalities, and how have you come to know them?

Absolutely, sharks have unique personalities. We see this in the sharks that we visit year after year. Any dive operator who works with the same sharks on a routine basis, like those in Mexico, the Bahamas or South Africa will tell you just how distinct these personalities can be. Some are shy, others bold, some stick close to other sharks, while others have very distinct behaviors or quirks they exhibit. Once you encounter a shark over and over, you can become very attached and bonded to them, especially after spending years and years visiting them. It makes the fight to protect them that much more personal.

I think this is one of the great benefits to locations like Tiger Beach, where many of the tiger and lemon sharks are named and well known. I think divers come away from their time there wanting to get involved with the fight to protect sharks because they now feel a closeness and protectiveness to these specific sharks and want to extend that to all others. This is wonderful to see. 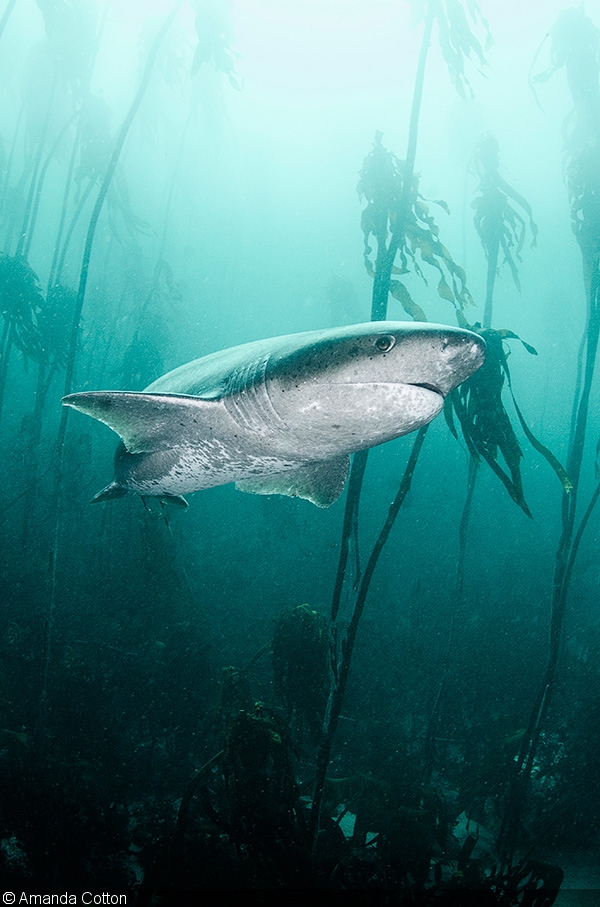 DPG: Do you have a favorite species of shark? Why?

Yes, my favorite species is the thresher shark. There is something so beautiful about the graceful movement of their tails and bodies. It looks like a ribbon dancer from the Olympics! They have almost a goofy-looking face, which is endearing. I love how beautiful the combination of their huge size and the ease and flow of their movement is—it’s like watching a dancer underwater when they swim by. That, coupled with how rare it is to see them, makes them my favorite. I love zebra sharks, too.

DPG: Where are the best places to go if people want an in-depth shark interaction?

It depends on what is meant by “in-depth shark interactions.” There are many ways you can encounter sharks, and not all types of diving encounters are for everyone. Many people do not want to experience baited dives, where sharks are enticed with the smell of chum and oftentimes fed bait to keep them close to the dive boat and divers. The best places to go to see sharks without being on a baited dive would be Cocos Island in Costa Rica or the Galápagos in Ecuador. In both of these locations, you will encounter several different species of sharks—hammerheads, silkies, reef, nurse, Galápagos, tigers, and more.

For baited dives, I think pairing education and understanding to your experience underwater is imperative. With this in mind, dives like those at UNEXSO with shark expert Cristina Zenato are wonderful. On these dives, you learn about shark behavior, shark conservation, and are educated about the importance of sharks in our oceans. 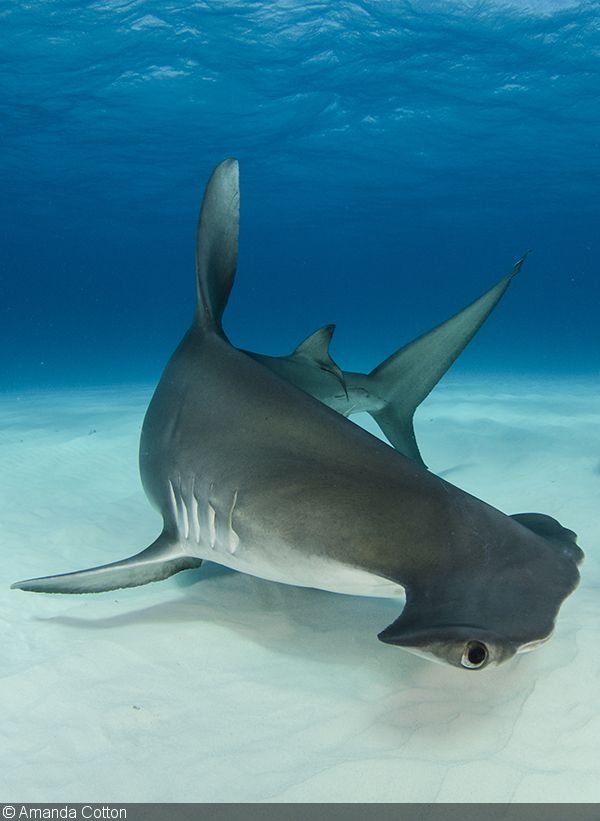 Definitely a bucket-list photo for most underwater photographers

DPG: What equipment do you usually shoot with?

I use Nikon cameras and lenses in an Isotta housing and Inon strobes. I also shoot mirrorless with Sony in a Fantasea housing.

DPG: Any advice on techniques that underwater photographers can use to take better action shots of big animals?

My go-to for shooting sharks or other big animals: 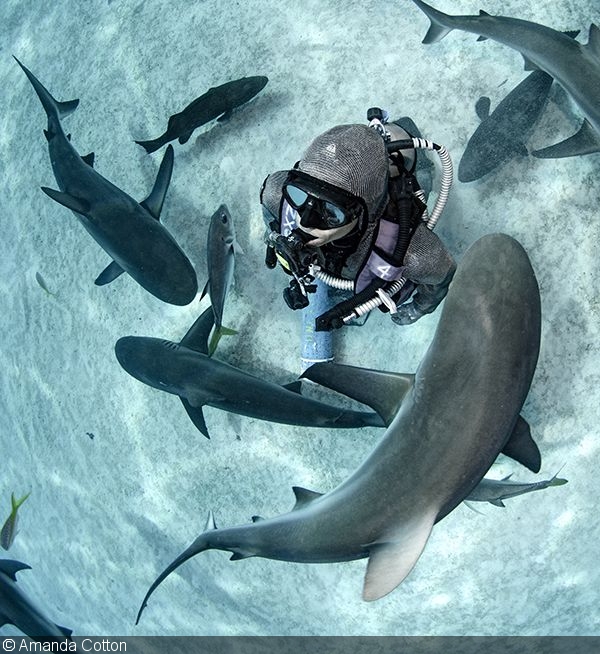 There is nothing like being the center of attention!

DPG: Sharks remind of me cats. What land animal do you think they act like?

A lot of times in the water with them, I have thought they reminded me of wolves, in both their movements and behavior.

DPG: What is your favorite dessert?

About Amanda Cotton: Amanda is a professional photographer specializing in underwater imagery. As an avid scuba diver and ocean enthusiast, Amanda’s goal is to help the general public embrace the beauty below the waves, in hopes that with awareness comes concern. While she enjoys owning and operating a conservation-minded design/media company, A Cotton Photo Creative Works LLC, Amanda takes great pride in working with like-minded organizations that genuinely care about the planet and its inhabitants, both above and below the waves. She has received numerous awards for her photography and is honored to be a Member of The Women Divers Hall of Fame. Amanda’s imagery has been published in major publications and news sources worldwide and has allowed her work to have a positive impact on the oceans through education and outreach programs designed to improve awareness toward the plight the oceans now face. Visit her website, www.acottonphoto.com, follow her on Facebook, Instagram or Twitter.

Daulphine Cathia wrote:
Great interview
You must be logged in to comment.
Support Our Sponsors
Advertise With Us
Newsletter
Travel with us