In this latest article in The Guide, hollywood underwater cinematographer Ian Seabrook chats with DPG about what it's like to work on productions big and small. 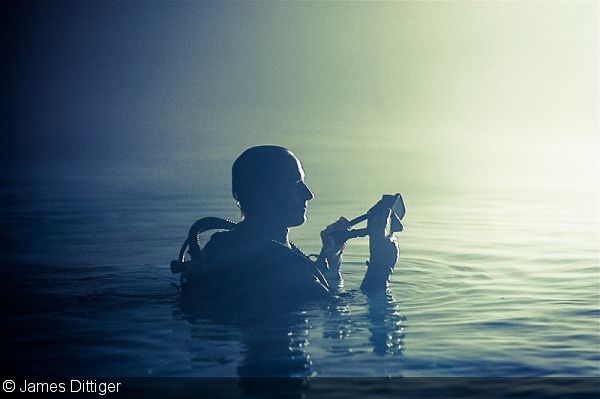 Ian Seabrook has worked as an underwater cameraman and director of photography on dozens of well-known Hollywood productions. Now, he shares some inside stories with DPG

You have to be able to think quickly in this line of work...
—Ian Seabrook

Lots of kids pretend to be James Bond fighting an epic underwater battle to save the day. But very few daydream about being the cinematographer behind the lens framing and filming the spectacle.

That young man was once Ian Seabrook, who grew up admiring the underwater cinematography in feature films like Thunderball and Jaws, as well as nature documentaries. Today, Seabrook is Hollywood’s go-to guy for filming complex, often dangerous underwater scenes. In fact, you’ve probably seen his handiwork in films like Pirates of the Caribbean: Dead Men Tell No Tales, Batman v Superman: Dawn of Justice, Mission: Impossible, and the newly released Deadpool 2.

In between all of the action, Ian took a moment to sit down and chat with DPG about his origins, his career, and what it’s like working with action stars. 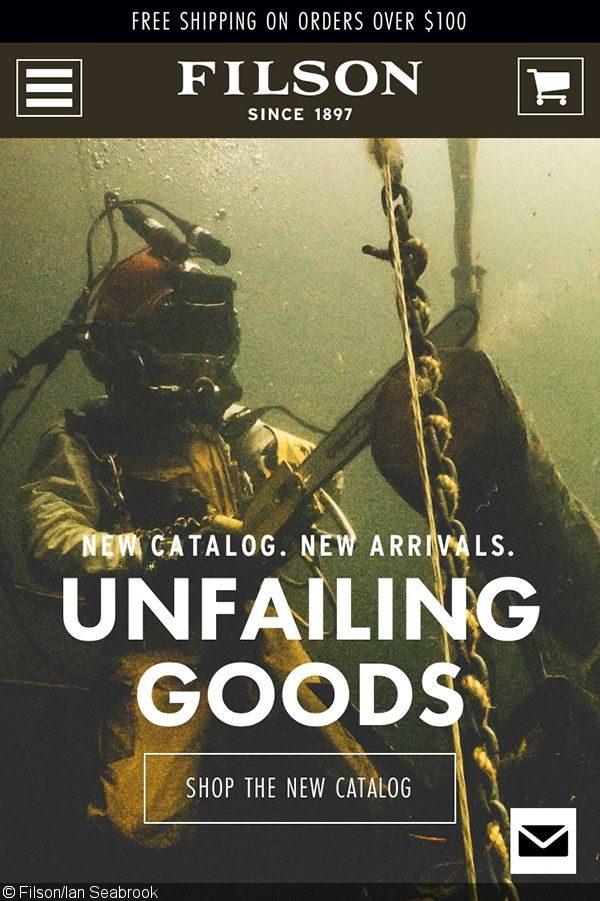 The cover of the Filson catalogue as captured by Ian Seabrook

I have photographic obsessions that have stayed with me for years—not only marine wildlife, but also architecture and photojournalism. I have huge admiration for those that have the arcane ability to compose beautiful frames from horrific events in history: Sebastião Selgado, Robert Capa, James Nachtwey, Chris Hondros and Tim Hetherington, among others. Underwater cinema-wise, a select few can hold the podium from Lamar Boren’s work on “Thunderball.” In terms of underwater stills, I was fortunate to dive the Channel Islands with David Doubilet. Ernest Brooks’ brilliant medium format underwater work is to this day still a sight to behold. From the cinema world, Robby Müller has always been my favorite cinematographer; his use of light and composition has been influential in my own work.

What gear did you start with and what are you shooting with now?

I started with film cameras, specifically a Nikonos 3. Initially it only had a 35mm lens, which was standard with that system. The 15mm lens produced the kind of images I was fascinated by in National Geographic but was financially out of reach at the time. Since then, I have moved on to a Sony Alpha system with a Seacam housing, which with respects to design and functionality are the best for what I require. In regard to motion pictures, I’ve used Hydroflex housings for both Arriflex 3 and 435 motion picture film cameras. With today’s digital cinema cameras, I use housings from Gates, Hydroflex and Nauticam. I am about to head off for an IMAX job this month. 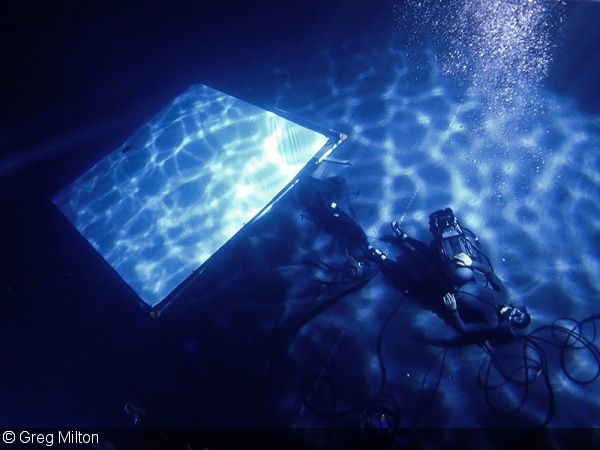 Inspired by the underwater cinematography in such films as Jaws and Thunderball, Seabrook began shooting with a Nikonos 3. He’s come a longway since then 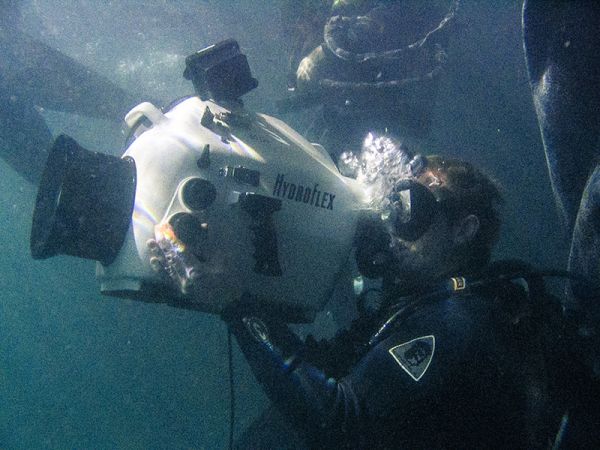 Your use of shooting against the light stands out a lot in your clips. How do you approach lighting a scene?

It depends on what the sequence entails. I tend to lean towards realism in lighting, with augmentation to flavor. I don’t like images to be overlit; and light can spread underwater, so controlling it is paramount. Keeping an eye on the sun is obviously very important and having a good underwater “grip” and electric team are luxuries I don’t take lightly. However, many times I am without support in the water, so having the ability to perform those duties myself is essential.

Do you prefer to be more of the cameraman (operator) or the cinematographer/director role?

As underwater director of photography I have to light, compose, and direct. As well, I must coordinate talent, wardrobe, special effects, visual effects, stunts and the dive team in the water, all within a managed time frame. Downtime is extremely rare and with limited time frames and windows of opportunity, it’s essential everyone involved be focused. When I come in as “just” the underwater operator, there are high expectations and little margin for error, as you may have only one take. Often times, the lines blur with these two descriptive terms, but the end result of both is capturing the best imagery possible.

Working on Batman v Superman: Dawn of Justice (pictured above) is a highlight of Seabrook’s well-credentialed career

Seabrook’s other notable film credits include work on Pirates of the Caribbean, Godzilla, and Deadpool 2

How much pre-preparation goes into planning even something as short as a 30-second scene underwater?

The finished product might seem short, but there is usually a lot of additional footage that doesn’t make the final cut. I have worked on high budget feature films with machine-like organization. I’ve also had it go the other way with extreme disorganization. I always prefer to have a high level of preparedness and communication. On some productions, you have several weeks to prepare. Others are last minute and at the end of the schedule when the money has run out. You have to be able to think quick with this kind of work. 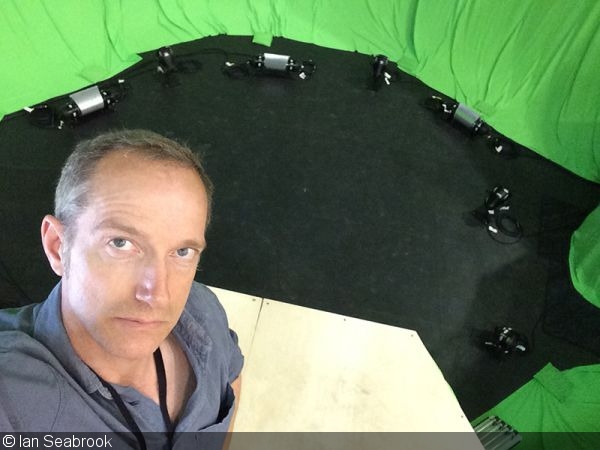 Ian Seabrook takes a moment to take a selfie on the set of Batman v Superman: Dawn of Justice 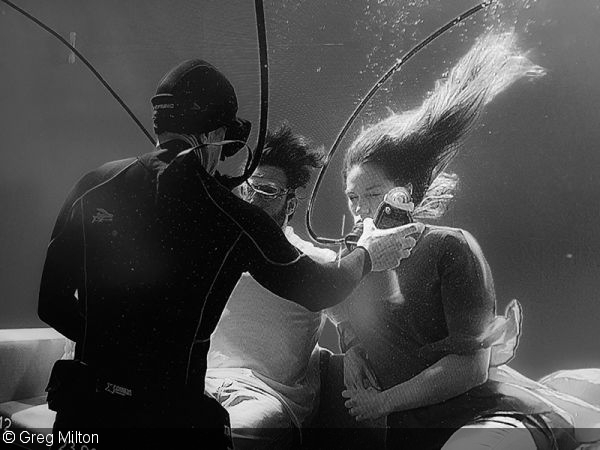 What’s it like working with actors or stunt doubles who might not (or aren’t likely) as comfortable in the water as yourself?

Most talent are good in the water. In fact, a select few excel at it, which allows for more creativity and success given the time frame allotted. Things happen very fast once all the elements are in place. Things come to a standstill when they are not. Stunt folk are somewhat expected to be Jacks- and Jills-of-all-trades, which is not always the case. There are many stunt performers who are not comfortable in water and few that specialize in it, which for obvious reasons are the preferred choice. This doesn’t always happen due to availability issues, so you have to improvise. 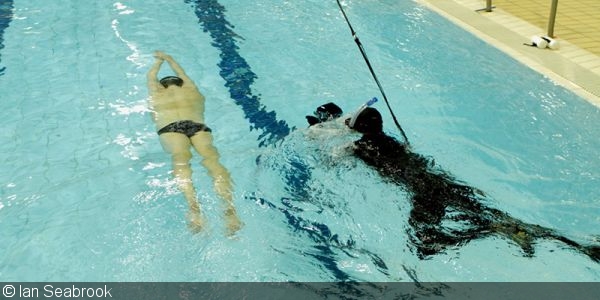 Ian Seabrook working on the set of an Olympic pool shoot

You’ve been involved in a lot of top projects and with A+ list talent (directors, producers, actors): Are there any that stand out as particularly fulfilling from an underwater imaging perspective?

For the location and personnel, Batman v Superman has been the most fulfilling project I have been involved with. The trust director Zack Snyder placed in me was paramount to the success of the sequences involved, which involved overhead environments, marine/dive coordination, wardrobe assimilation, and some major stunt coordination. With a combination of stage tank set work in Detroit and on-location open ocean work in Tahiti, the culmination of all forces combined to create immensely gratifying memories.

What’s your dream project that you’ve yet to work on?

There are a few. But off the top of my head, I’d love to collaborate with the great director Terence Mallick and to one day contribute to a Bond film. 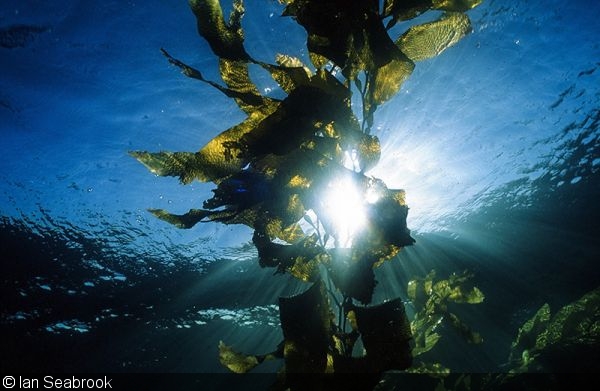 Ian began his career with stills, even earning a third place finish in a dive photography competition judged by David Doubilet

Ian Seabrook is an underwater director of photography and underwater camera operator in the motion picture and television industry. For more of his work or to inquire about services, visit his production website, www.DorsalFin.net.

hot mail wrote:
You’ve got it! <a href="http://hotmailsigninaz.net/">hotmail</a>

edouard mollard wrote:
the movie was insane
You must be logged in to comment.
Support Our Sponsors
Advertise With Us
Newsletter
Travel with us