Photographer Erin Quigley took this amazing image on a 2010 DPG Expedition to Guadalupe on the Solmar V. She subsequently entered it into the 2011 DEEP Indonesia International Underwater Photography Contest and won Best of Show.  The image tells a clear story of a predator prey relationship, and in this article, Erin tells the story of how it was made.

I was 16 years old when the movie “Jaws” was released. We lived on a stretch of peninsula in Long Beach California, with a large bay at one end of our street and the Pacific Ocean at the other. My siblings and I spent a ridiculous amount of time in the water, and after seeing “Jaws”, became obsessed with all things Carcharadon. My youngest sister had a poster from the film tacked up in her room, and at night as I passed it on my way to bed, I’d avert my eyes to avoid the famous, nightmarish image of a hapless swimmer on the surface about to be consumed by a monstrous Great White Shark below. 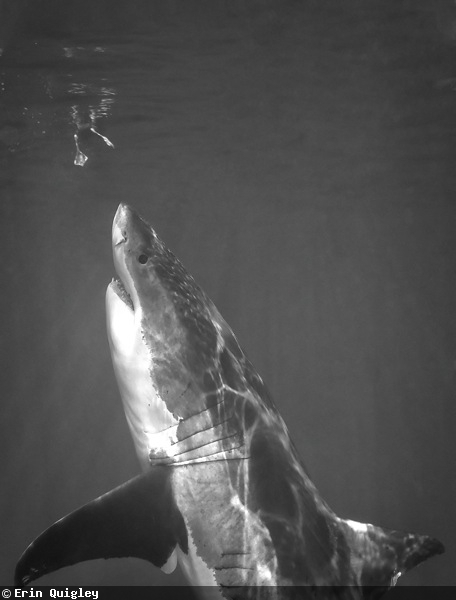 The Idea
Cut to 35 years later as I watched a similar drama play out in real life, but instead of trying to avoid the image of impending doom, I was hoping to capture it with my camera. It was day 2 of our DPG expedition to Isla Guadalupe in Mexico, and a group of seagulls, attracted by the bait in the water, had taken up residence on the surface of some rather sharky water behind the boat. From topside, the gulls didn’t seem afraid or even much concerned about the sharks, just peeved when one took a swipe at them. In fact, it was surprising how half-heartedly the sharks pursued the gulls, and how little energy the gulls had to use to make a getaway.

The underwater P.O.V. revealed an entirely different story. Even the slowest, most laconic approach of the enormous shark towards the tiny, vulnerable feet of the gull created an encounter full of life-and-death suspense.

The Shot
Our trip took place on the heels of Hurricane Earl, and it was rougher than usual at the site. I had never been in a shark cage before, and was surprised how hard it was to manage my D300 and 2 YS-250 strobes. Every time I turned to frame a shot, I’d inadvertently bash the strobes out of position on the bars of the cage.

While getting tossed around, I couldn’t stabilize myself enough to readjust the strobe arms and rack out as the sharks approached, so my framing and lighting was off in a huge percentage of my shots.

My biggest problem was trying to light through too much water, so I decided to ditch the strobes. What a difference. I was much more comfortable with the resulting smaller camera rig, and my shots were cleaner and sharper.

When it comes right down to it, I just got lucky with this photo. This young shark had been toying with the gulls all day, bumping their feet with his nose and then swimming off. He finally picked on one that was close enough for me to get a decent shot of. The picture was taken with a 17-35mm zoom at 35mm, so you can imagine at that distance there wasn’t much color in the image except blue, which made it a good candidate for a black and white conversion. Black and white conversion also adds a cinematic feel, and pops the pattern of light on the shark.

peter Nicholas wrote:
I saw the same thing in South Africa. The seagull was busy with the bate and up from below glided this white. We watched as the shark just came straight up, opened its mouth and took the bait and seagull in one motion. Then about 10 seconds later the seagull popped back up, looking a bit dazed and flapped a few times then flew off, not a scratch on it!!

Russ Sanoian wrote:
Awesome shot Erin! They are such curious critters and can be so gentle if needed.
You must be logged in to comment.
Support Our Sponsors
Advertise With Us
Newsletter
Travel with us