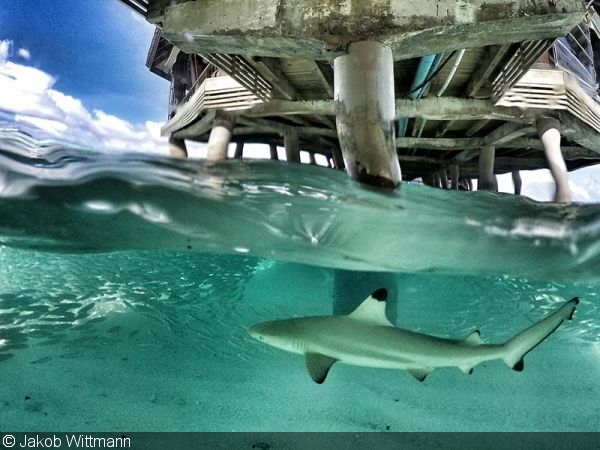 In recent years, I’ve been traveling a lot and I’ve discovered a love for photographing and filming nature along the way. However, my interest in underwater photography grew a lot through a single trip to South Africa in 2010. During a day out on a boat to swim with great white sharks, I met another photographer using what was then a revolutionary product: a tiny camera taking HD video called a GoPro.

Seeing what such a small camera could capture, I was inspired to try my hand at underwater photography. Ever since then, my GoPro always comes with me when I travel—including a more recent adventure to swim with humpbacks in the Dominican Republic’s “Silver Banks.” In preparation for the trip, I began researching the best whale images. That's when I discovered professional photographer Craig Perry's stunning over-under images.

I loved the images and it soon became a dream of mine to take similar photos. But how could I accomplish this with a mere GoPro? My next big trip was photographing more humpbacks, this time in Tonga. Needless to say, I was determined to capture some awesome split shots. 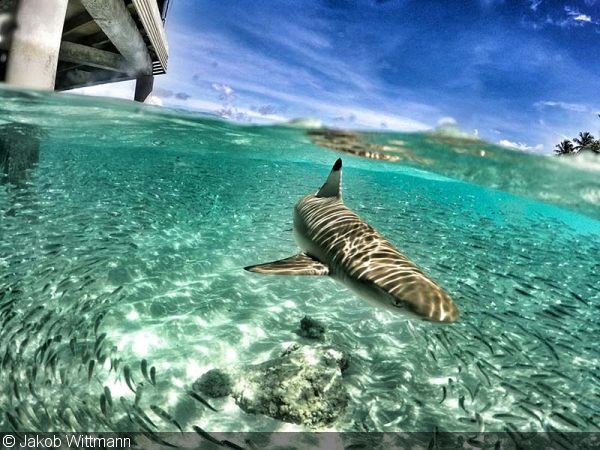 There are a few big companies out there selling dome ports for the GoPro, mostly designed to be used for surf photography. So I decided to build my own dome port specifically for taking over-unders with a GoPro. It started out rather start “DIY,” constructed from a balloon and one of those transparent Christmas ornaments. My bespoke dome port actually worked really well in controlled environments, but I wasn’t very confident it would fare as well in the ocean.

Searching for alternatives, I began talking with some other designers in the Philippines, Christian and Noel. After a lot of planning via instant message, we decided to partner on a project to build affordable domes for action cameras. We started by creating the back plates of the ports with a 3D printer and customized acrylic spheres for the dome. My GoPro over-under dome port has come a long way since those earlier DIY days, and the final product—the SWG Dome—is soon to be released to the public. 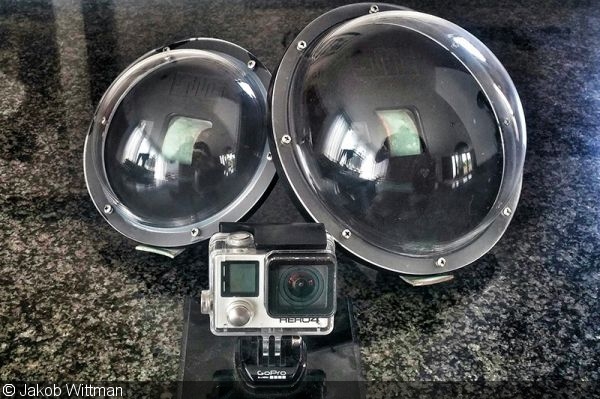 The design for Jakob’s SWG Dome has come a long way from the DIY version, which was constructed from a balloon and a Christmas ornament 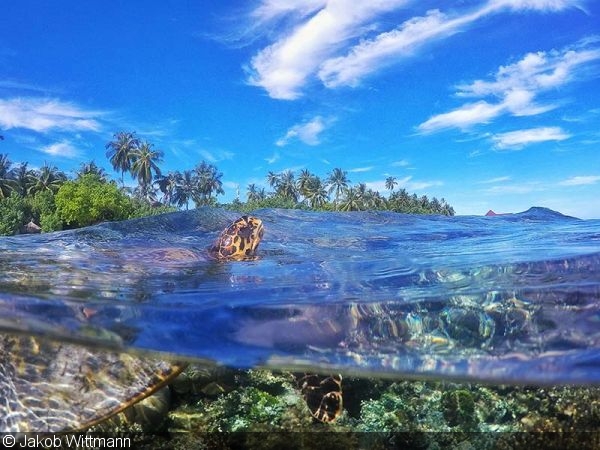 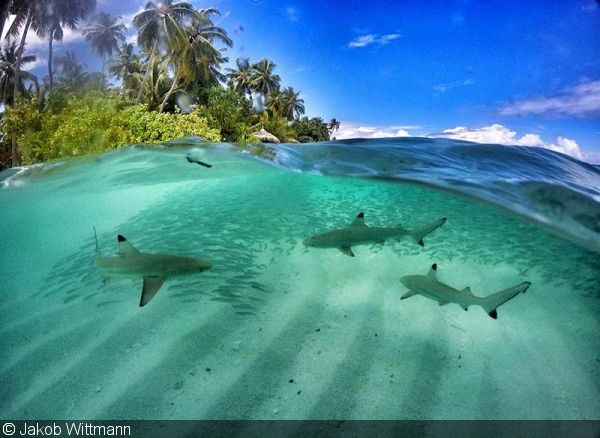 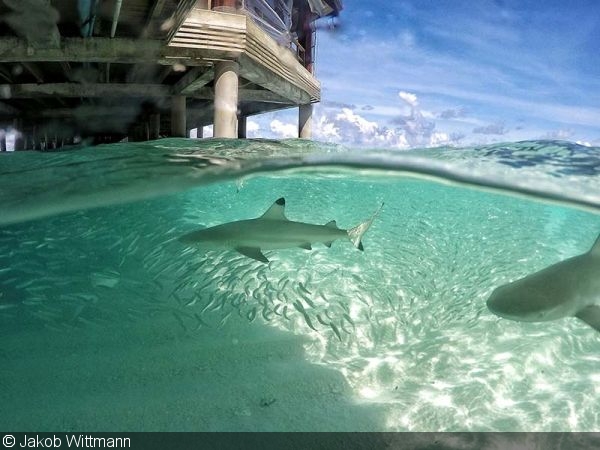 I’ve brought along this dome port on all of my adventures since the first prototype. But I wasn’t able to mimic the over-unders of professional photographers right away. In fact, on that first trip to Tonga, I came away without any split shots of the whales—even if I did manage to take some nice underwater images of a mother and calf.

On my recent trip to the Maldives, I finally had the chance to get a lot of over-under images of turtles and small blacktip reef sharks right off the hotel’s reef. At such shallow depths, I didn’t find the need to use filters or additional lighting—although I plan to test this with some sunset split shots. 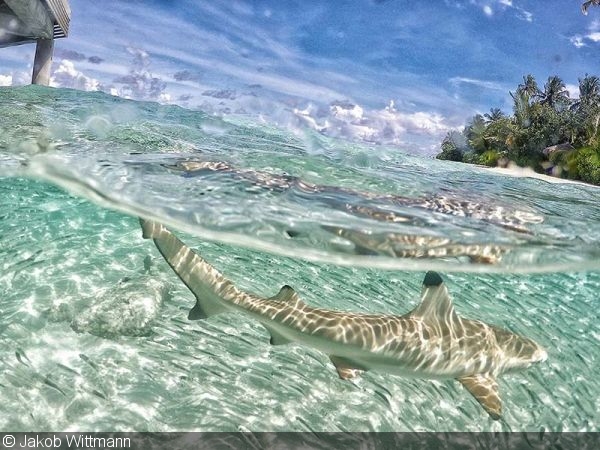 To avoid fogging, make sure to keep your GoPro under a cool, wet towel when not in use

Other than my dome port, the setup is rather simple. I’m currently using a GoPro HERO 4, but I don't have a display on the back of the camera—and that’s probably for the better. It would be really difficult to keep an eye on the LCD screen while composing an over-under image in any real-world conditions. As such, I usually put my settings so that the time-lapse mode is set to 0.5 seconds. I think for shooting pictures in waves, the GoPro’s burst mode might produce good results as well, but I haven’t tried it out yet.

It’s best to avoid having the sun in front of you, as it can cause reflections in the dome. Also, when the sun is in front of you, the GoPro will adjust exposure so that the image isn’t blown out, but this will underexpose your scene underwater. As such, it’s best to make sure the sunlight is at your back.

Another problem to consider when using a detachable, acrylic dome port is fogging. It’s possible to avoid the dome port overheating and fogging by keeping it under a wet towel when not being used. In my experience, it helps to connect the dome port to the camera in an air-conditioned room prior to the shoot. 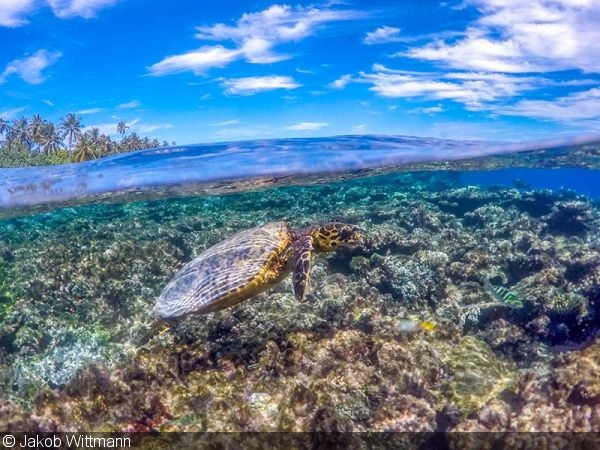 A key to over-under photography with natural light only: Make sure the sun is at your back to avoid lens flares or reflections in the dome port 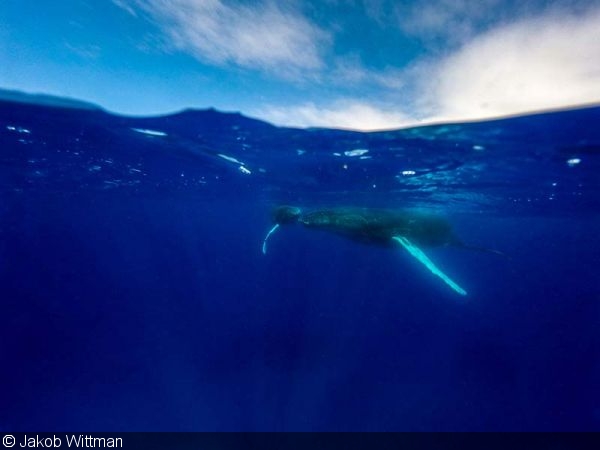 The ability to take stunning over-under images can take your photography to the next level. This possibility is now open even to casual travel photographers using GoPro through an accessory lens like my SWG Dome. I may not be a professional photographer, but I am always looking for ways to improve my images—and with these over-under images, I am very satisfied with the memories I’m taking back home. 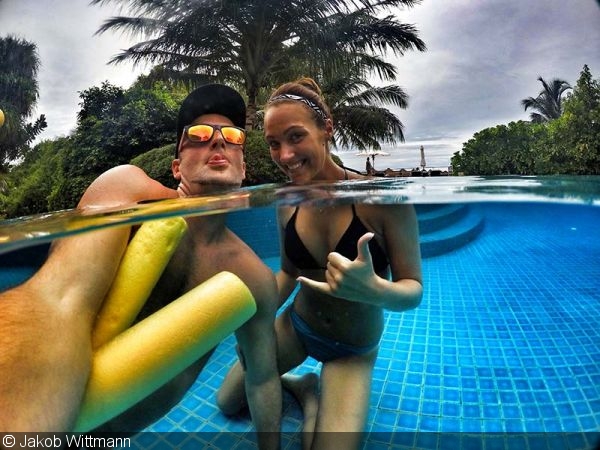 Jakob hopes to experiment with more complicated forms of over-under photography, including the use of continuous lighting to illuminate subjects at dusk and dawn

Noah Maire wrote:
Go Pro quality is so nice !
You must be logged in to comment.
Support Our Sponsors
Advertise With Us
Newsletter
Travel with us