Let it be known, Nudi diving in Southern California is my obsession. I have traveled the world in search of Nudibranchs. I muck dove the mysterious black sands of Lembeh and Bali, explored the coral reefs of the South Pacific, drifted walls and dropoffs in Micronesia with a macro lense. Even Nudi hunted the diverse and surprising mixed diving of the Philippine’s. But when I come right down to it, I love going Nudi in California.

February in California usually marks a turning point as far as dive conditions are concerned. Topside the weather becomes blustery, the water temp drops and the Nudi’s explode in numbers. 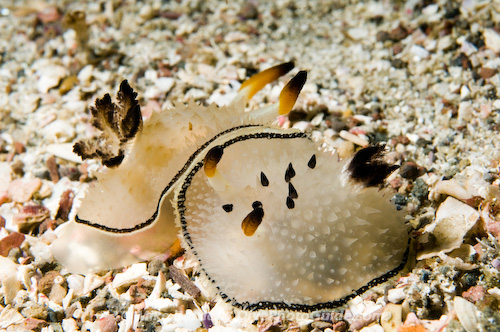 The majority of what I like to shoot revolves around animal behavior, the three F’s as I like to call it, feeding, fighting and fornicating. These three activities seem to be the most photogenic for any animal but especially for Nudibranchs. I am lucky enough to find some great examples of just that.

The question here seems to be, are they mating or just dating. The Dendronotus alba’s I found here are definitely getting to know each other, hanging out snacking on hydroids, they’re beautiful contrasting color’s ward off predators. Catching my eye from a distance, I move in for a closer inspection. 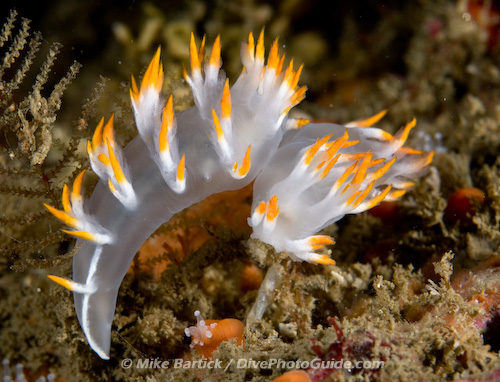 Nudibranchs are hermaphrodite meaning that they are both sexes at once. Male and Female, but even so they cannot reproduce exclusively on they’re own. They must mate to procreate.

The Phidiana hiltoni or Hermissenda crassicornis seem to be very social. They will puff themselves up when confronted or when they are near hopeful lovers. During they’re dating ritual they may actually bite and rub each other in a brutal courtship that eventually leads to romance. 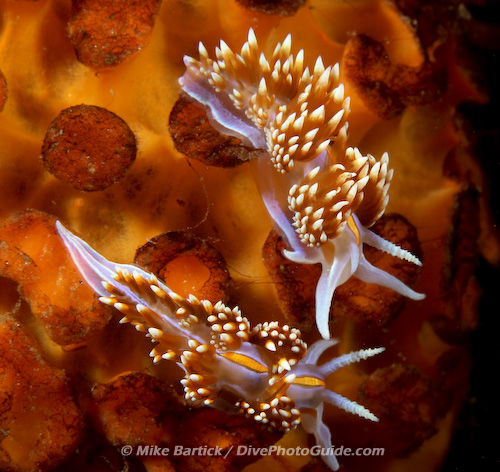 The act of mating is a brilliant act of nature. Any two like specy of Nudibranch align themselves in a head to toe fashion. The sex glands are conveniently tucked away into they’re right side. After the dating rituals run they’re course and the time is right, the two connect. The act of mating can take from just a few seconds to thirty minutes, queue the music!

Videographer Walter Marti shares his own passion for macro photography and captures some outstanding mating behavior footage. Notice the hooked appendage on the Flabellina, it looks painful but nature will endure. If they don’t stay attached then reproduction will be impossible.
The second clip Walter provided shows a classic mating ritual between two hemissendas and how brutal it can actually look.
One of my favorite California muck dive’s is La Jolla shores. Most night dives here will yield a fairly decent variety of great Nud’s.
On a stormy night my buddies Kimmy, Terry and I braved the surf in search of the oddities of the canyon walls.

We were not disappointed as we found a couple of very ornate creatures. The Janolus barberensi and an off colored Dendronotus subramosus, really good finds considering the stormy conditions and the salad bowl of detritus we had to sift through. 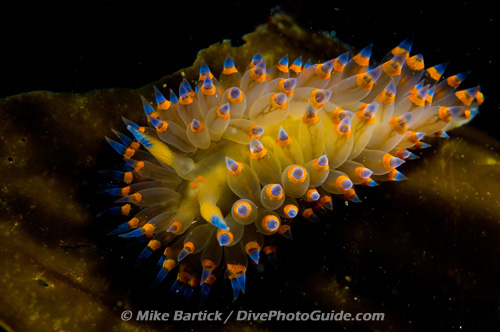 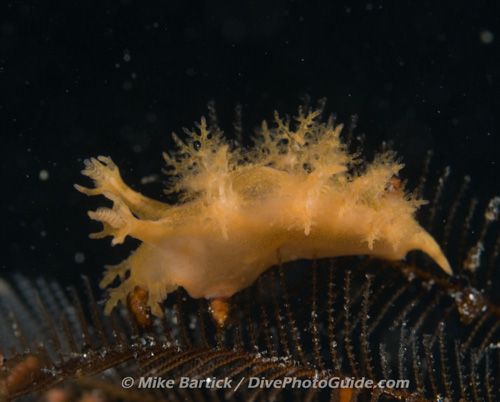 The water was turbulent and full of sediment to say the least. It was like diving in a jar of Italian salad dressing. Lighting in a situation like this is critical and i know shooting in this environment can mean one thing, backscatter. To avoid that I have polished a technique for lighting that mitigates over lighting. A technique similar to what I first learned from my buddy Kevin Lee. 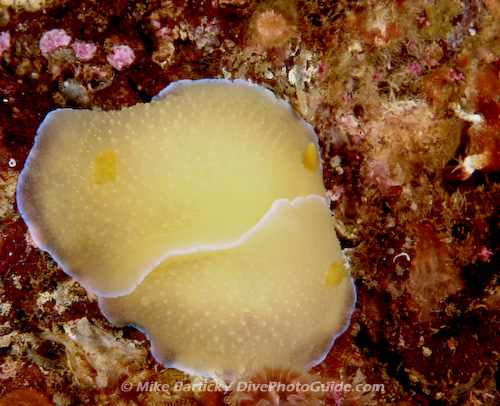 Carefully aiming my strobes straight down so the flash cone barley graces my subject is the best way I have found to control over lighting. This seems to work very well for poor conditions and for night diving. Cutting down the cast of light and never crossing the flash beam helps to reduce the chances of “Snow globe photos”. Using this technique for the Janolus barberensi make’s it glow, this is truly a show stopping Nudibranch and when lit properly every detail becomes apparent.

The rare Trapania velox is another great example of the Nudibranchs one could hope to see at LJS. I used some back lighting for this photo as the white dorsum is generally tough to expose. The subtle details are easily blown out with direct lighting so a single strobe does the trick. 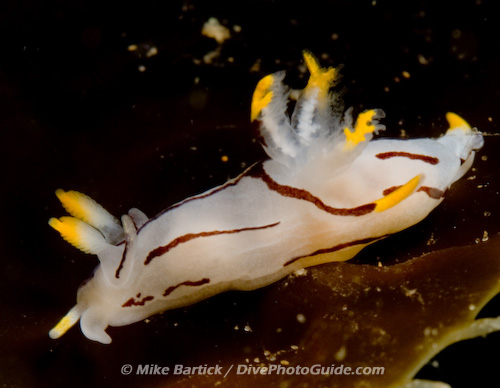 Deeper beyond the first wall of the canyon I find an Armina californica. The Armina usually feed on sea pens and pansy’s and dwell on the open sand. 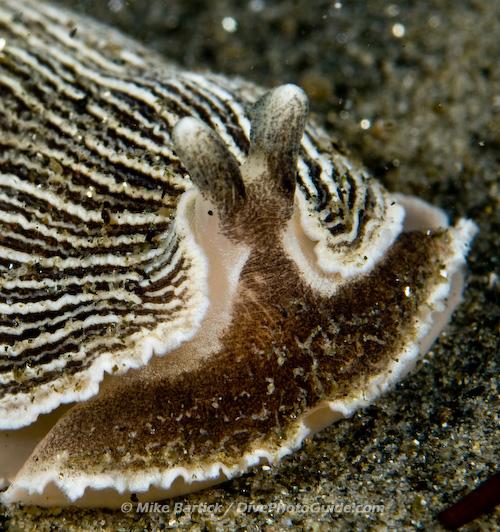 Along the canyon rim there is a nice variety of nuds on any given dive and that’s what makes this area a mecca for Nudibranch enthusiasts.

Heading in over acres of tiny purple sand dollars, we discover patches of filamentous red algae. The search produces a great find indeed, though very tiny. This Hermeae oliviae is hardly visible. Seen here, the Nudi is dwarfed by the chopstick used for reference. 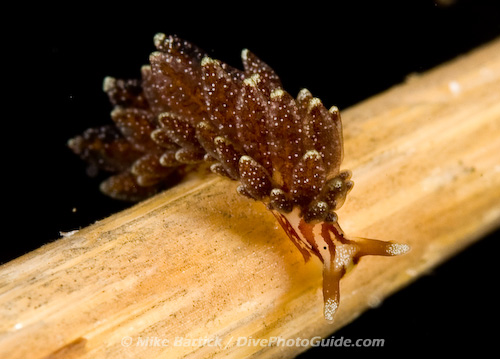 In addition to the Nudibranchs, this area is packed with Blennies, Rockfish, Sarcastic Fringeheads and Pipefish, juvenile Giant Black Seabass, Greenlings, and the real possibility to witness a squid run.

Fast lenses are recommended here as well as mid ranged zoom lense. I generally like to shoot my 60mm Nikkor lense without a teleconverter or diopter.

California remains to be one of my favorite areas worldwide to dive. The diversity of the life is only matched by the diversity of dive sites. Kelp, muck, rocky reefs or wrecks, we really have it all, but if someone asks what I like to do best, my answer will always be… Going Nudi in California!
Special Thanks to Marissa Dive Charters and their crew.

Mike Bartick as a member of the extended DPG editorial team. Mike can be found in our featured member galleries, and you can also explore more of his work on his website.

Mark D. Glesne wrote:
Absolutely LOVE this series! Thanks for bringing it to us!

Jason Heller wrote:
Thanks, I love these as well. Mike is doing a great job in making me want to go diving in California!

Larry Polster wrote:
Hey Mike, great series of article and photos, hope to dive with you again soon
You must be logged in to comment.
Support Our Sponsors
Advertise With Us
Newsletter
Travel with us