Part 2 of an ongoing series that commenced here.

Let it be known, nudi diving in Southern California is my obsession...

The month of January has ushered in new adventures, the diving has been exceptional and the nudi hunting productive.

I joined a group of local nudi hunters on the dive boat Marissa to explore the Point Loma kelp beds. The skies were clear and warm, the ocean was flat and marine mammals were everywhere. Migrating gray whales on the horizon and dolphins at the bow, we head south for deeper waters.

The Point Loma kelp beds are nestled into the coastline where San Diego meets the U.S. Mexican border. The area is known for deeper dives, some of the coldest waters in Southern California, wrecks, and yes, nudibranchs!

Today my primary focus is feeding behavior. Sticking to my proven strategy I look for the food sources first. This is a very reliable way to find any number of nudis. The reefs here are teaming with invertebrate life and lots of nudi food. Varieties of Corynactus like the strawberry anemones are abundant and beautiful as well as many others types. There are sulfur sponges that resemble bright yellow tennis balls and large red gorgonians which resemble red leafless shrubs—both of which are the favorite snacks of many nudis.

Nudibranchs are specialized feeders and consume many different varieties of food. However, each species usually feeds on only one type of food. Some Aeolids love sponges, Dorids love algae and still other nudis can be found consuming barnacles and even crustaceans.

Right away I find a rather large Tritonia festiva munching away on a red gorgonian and I was able to capture some very tight photos. Using its digestive plate loaded with microscopic teeth the Tritonia strips the gorgonian down to a nub. I sure am glad these guys are small.

Some nudis like the ornate Aeolids have many rows of teeth called radula that are used to rasp away at their food source. Dorids on the other hand secrete acids from their stomachs onto the food source then drink up the fluids. This is true sci-fi stuff and the more I learn, the more intrigued I become.

Other nudis are carnivorous and feed on small animals like microscopic shrimp and crustaceans. Melibe leolina lives on kelp fronds and is a great example of this class of nudibranch.

When feeding, the Melibe will inflate its already bulbous head to triple is volume. The Melibe sucks in water and microscopic shrimp, consuming them whole.

This is really wild to see and makes for some great behavioral photos. The first time I saw this odd behavior I was blown away, I didn’t realize what I was looking at. My buddy and nudibranch expert Kevin Lee explained it to me. I did a little research and found out he was not only right but this Melibe was an animal eater. 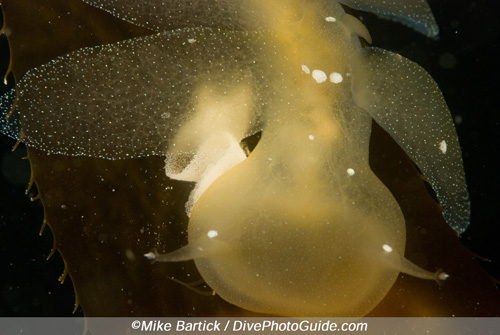 Later while shooting an Acanthadoris my modeling light caught something colorful. I looked closely and I spied a very rare species. I signaled my nearby friend and fellow brancher Kimmy to come see what I had found. By the way she reacted it was evident that I had found something rare, a Babakina festiva. Kimmy was so excited that she let out a sound like a trumpet. Then she took off with a steady stream of bubbles behind her to look for her buddy Terry. It’s funny how we can get that excited over slugs. 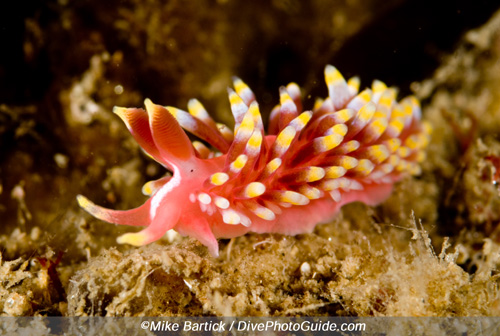 This Babakina festiva is actually the second one I have found in the last several years. Both were found in complete opposite habitats several hundreds of miles apart. At once my obsession is reignited and this to me is the equivalent of a “hole in one.”

I line up on its rhinophores and I can see its eye spot. With its flamboyant colors and body texture I know this will make a nice photo. I like to shoot as fast as I can for sharpness so I boost my speed to 320. My f-stop is set at a strong mid range of f/16 and using a soft side lighting technique I bring out the detail. 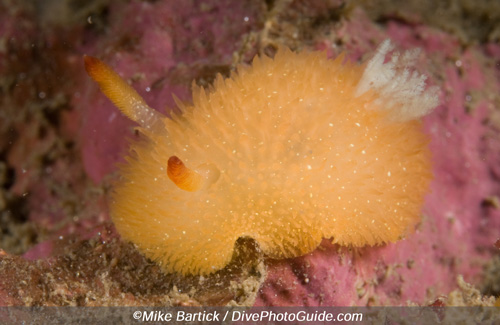 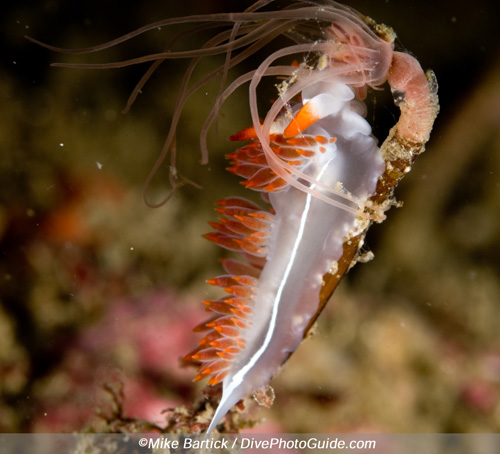 Nudibranchs are not always hard to shoot but it can be challenging to get the right photograph. The toughest part is finding them.

The San Diego area is teaming with nudibranchs. Dive spots like Point Loma, La Jolla shores and Scripps Canyon are all excellent places to explore.

California has so much to offer and diving on a warm January day is what this place is all about. True the water may be bone chilling but this is as close to exotic as I can get and still sleep in my own bed.

Special Thanks to the Marissa and their crew. Karl and Anita are as passionate about the ocean as we are to dive it!

Mike Bartick as a member of the extended DPG editorial team. Mike can be found in our featured member galleries, and you can also explore more of his work on his website.

Bobby Arnold wrote:
Great stuff Mike! Left wanting more...
http://www.mydivinglife.com/Scubabob
You must be logged in to comment.
Support Our Sponsors
Advertise With Us
Newsletter
Travel with us