A note from Jason: We welcome Mike Bartick to our extended editorial team. Mike is a talented photographer who was one of the first in our featured member galleries. Mike will be working on a few ongoing series of stories, primarily focused on the often overlooked underwater photography opportunites in California. We're sure you'll enjoy them.

Let it be known, nudi diving in Southern California is my obsession.

I have traveled the world in search of nudibranchs. I muck dove the mysterious black sands of Lembeh and Bali, explored the coral reefs of the South Pacific, drifted walls and dropoffs in Micronesia with a macro lens. I even nudi hunted the diverse and surprising mixed diving of the Philippines. But when it comes right down to it, I love going nudi in California. 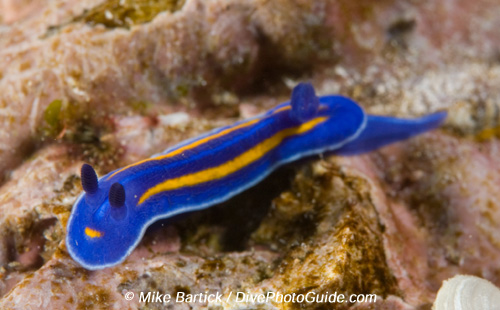 My obsession for finding nudis began right here in my own backyard, Laguna Beach, California. Diving and shooting with my little point and shoot, I would peruse the local reefs firing away. Little did I know that I was on the road to a full-blown obsession?

I am not alone! I discovered, there is a world of nudiphiles out there doing just as I am. It was clear what I had to do. I needed serious help. So I bought a bigger camera… and so it began… I was hooked. 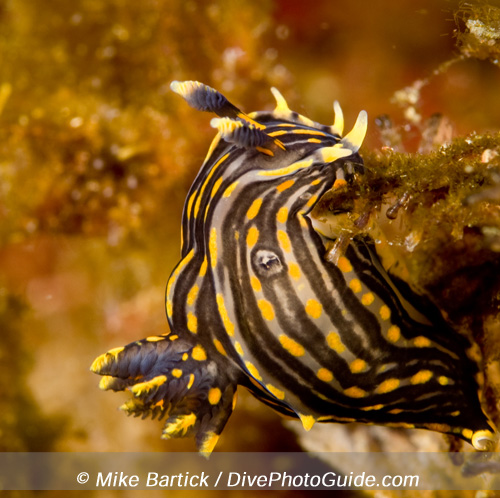 The local reefs are teaming with nudis. The ornate Spanish shawl and Hermissendas seem to be the most common. They are easy to find for even the greenest of divers and photographers. Every different area of California will yield totally different species. Ornate nudis like Caudlinas, Dendronotus, Aeolids and Dotos make interesting species to hunt and photograph for their flamboyant colors and body textures.

According to nudibranch expert and noted author Dave Behrens “California is home to over 100 described nudibranch species. More nudibranchs may exist that are not described. … California has more introduced species than other areas. This is thought to be due to our number of large ports receiving ships from foreign ports, and our extensive oyster mariculture operations years ago.” 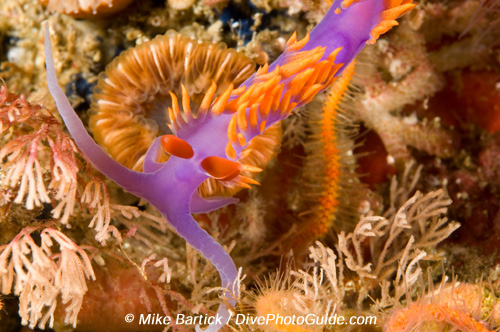 Wow, that’s a lot of nudibranchs in Californian waters.

The most reliable ways to find nudis is to look for their food sources first. Sponges, hydroids and a variety of algaes are a favorite snack for many of these little guys.

Once found, a quick search of the area will reveal if there are any nudis. They can be found at depths ranging from tidepools to deep outer reefs.

Recently my obsession took me to Ventura. I hopped a ride to Anacapa Island on one of the area’s premier dive boats, “The Peace.” Anacapa has been a long-time favorite of mine and has been a reliable place for finding nudis both common and rare. 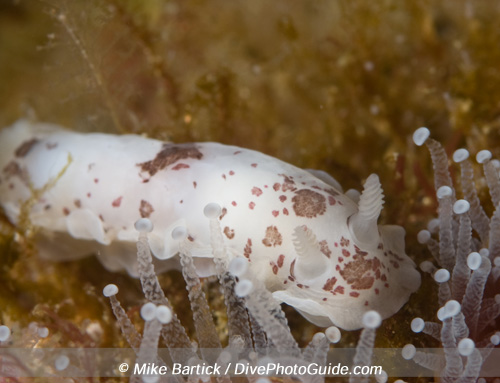 Our first dive site is a killer spot called Outside Coral Reef. This area is carpeted with brittle stars, a colorful canvas for both macro and wide angle.

The water is crystal clear, crisp, cold and deep. Right away I see alpine white lacey nudibranch lounging in the red gorgonians—beautiful contrast. Shooting nudis in cold water always seems to be tougher than warm water. Between the surge and the onset of hypothermia, getting a sharp photo while shaking isn’t always easy! 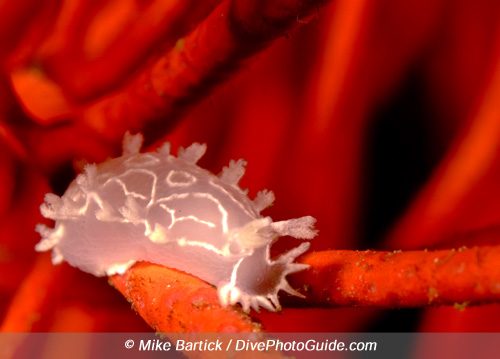 I like to work a couple of subjects at a time when possible. I concentrate on shooting photos of one nudi while keeping tabs on the other. There are really only three things these guys are doing down here: feeding, fighting or fornicating, and they are usually found doing one of these things.

While shooting a Spanish shawl, I watched another nudi head straight to a hydroid for a snack. Some nudis like the Stearnsi love to munch on hydroids. 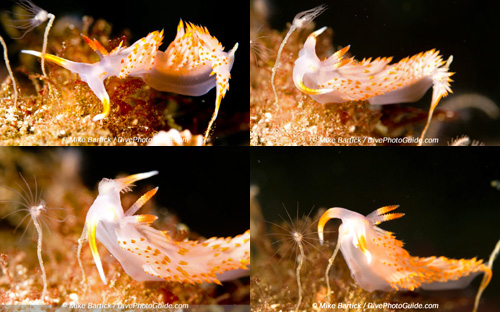 What makes a snapshot of a nudibranch a great photo? Sharp rhinophores are of utmost importance. Branchial plumes are interesting, but it’s not always easy to get both sharp. Lighting is essential and a little negative space will really make the colors pop. 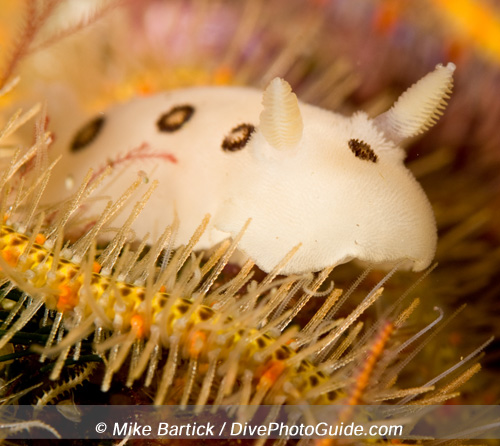 I like to utilize a horizontal plane of the “depth of field” as much as possible. This allows me to photograph more of my subject. My Nikkor 60 mm lens is perfect tool for the job. To get a little tighter I use a Tamron 1.4x teleconverter. My camera body is a D300 with a Sea and Sea housing. I am also using a dual strobe set up but dual strobes are not always mandatory.

All in all I shot 15 species of nudis, which isn’t too unusual. My buddies and I have shot upwards of 19 in one day. However, a few of the subjects I photographed today are among the more commonly found. The backdrop of the brittle stars made for some really pretty and colorful exposures and compositions. 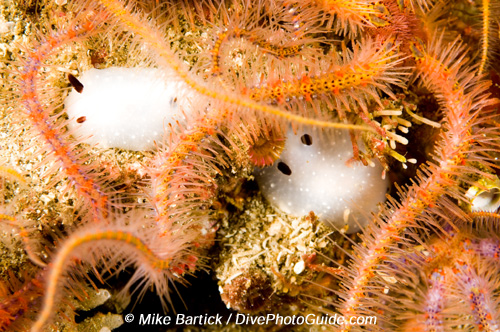 While it’s true there are some more exotic places to hunt nudis, California stands out as a definite hot spot. So pack your lenses, teleconverter, diopters and dry suits, and make your next LAX layover a stay over.
PART II

We welcome Mike Bartick as a member of the extended DPG editorial team. Mike can be found in our featured member galleries, and you can also explore more of his work on his website.

Join us in welcoming Mike by leaving a comment for him below...

Mike Bartick wrote:
Thanks guys, i appreciate your comments. The Nudi's here in California are really unbelievable. Im always on the hunt. I have been adding photos to the gallery sections and will continue to do so. Check back often..

Cheers and happy hunting!!..Nudi's that is...

Larry Schatz wrote:
Great piece and photos...I had no idea there were so many little fellows on the left coast...Larry

Joel Geldin wrote:
Thanks for the Nudi hunting tips Mike. They'll help me see more than just the "usual suspects" on my dives.

Ellen Bedrosian wrote:
I love nudis. They are such cool critters. Thanks for the tips on photographing them.

Terri K. Roberts wrote:
Mike---Your nudi photography is outstanding!!! I appreicate your tips and know that they will help me improve my nudi shots. I have a D300 with a 105mm macro lens, Sea & Sea housing with two Sea & Sea strobes. I think I have to work on the horizontal plane/depth of field.....I seem to get the rhinophores in focus and not the branchial plumes. My first experience in/around Wakatobi, Indonesia, I shot head on mostly. Any other tips would be welcome! Who would think cold water CA had that variety of nudi's! Sorry though, burrr, no cold diving for me---I love the Jupiter FL warm water temps............Terri Roberts

Nancy Boucha wrote:
Mike:
Your photos and article has waked up the world on Nudibranchs the world over. It seems that most people go for the "big fish". This will encourage them to "stop and smell the roses".

Nancy Boucha wrote:
Mike: Since you are getting cold while diving in California, I would like to suggest you start diving in a drysuit. It makes such a BIG difference in your comfort, enjoyment and concentration levels.
Nancy

Stuart A. Halewood wrote:
Mike: Great article! I'm looking forward to the next installments. I too am a Cali Nudi lover and I think you have some excellent images there. Keep the shooting tips coming! I'm luck enough to dive the Southern Cali Channel Islands as part of my job and will be keeping my Nudidude eye wide open!
You must be logged in to comment.
Support Our Sponsors
Advertise With Us
Newsletter
Travel with us