Editor’s Note: Markus Roth, well-respected professional photographer and owner of Roth Photo Agency, raises critical ethical issues that all underwater macro shooters should be aware of. The opinions in this article belong to the author. 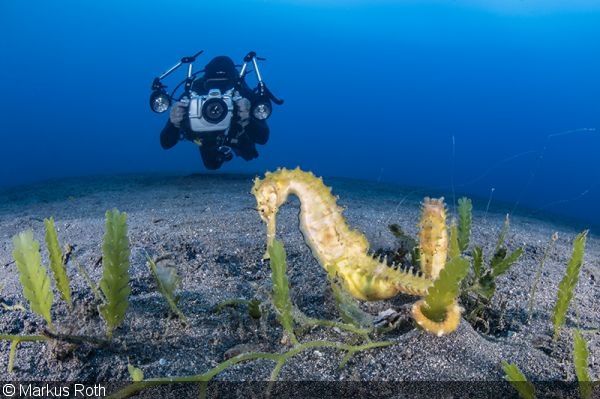 An often hotly debated topic among divers and photographers is the feeding of large animals with the goal of creating a spectacular experience. The result is fantastic photos and videos of these animals. The debate around the artificial feeding of big animals is out in the open, and most divers are aware of it, yet a critical examination of the topic of the manipulation of macro subjects rarely takes place.

For example, who doesn’t know the cute pygmy seahorses? Sugar-sweet looking with their bright pink or yellow colors, they are the focus of many photographers or videographers. But there is a darker side to photographing these tiny animals. What few observers of pygmy seahorse photos or videos know is that they have no eyelids to protect themselves from flashes or lights. Too often, on my travels, I’ve seen groups of photographers, videographers, and divers blast these little animals with their lamps and flashes, all while their guide repeatedly sets up the animal with their pointer to give everyone a good shot. When the divers leave, they are evidently distressed and disoriented, desperately clinging to the gorgonians on which they live.

Here are two classic shots of pygmy seahorses, a bucket-list shot for any macrophotographer. In the image on the left, the seahorse has not been manipulated or moved. How do we know this? The polyps of the coral are out and are undisturbed. The right-hand photo is a great shot, but most of the coral polys are retracted, indicating that the guide used their pointer to try and line up the subject

The British marine biologist Dr. Richard Smith wrote his Ph.D. thesis on pygmy seahorses and created a code of conduct for observing the animals. He pleads with divers not to touch them or their host, to avoid using artificial lights/flashlights, to not night dive with pygmy seahorses, and last but not least that each photographer should have a limit of five shots with lighting. Sadly, this advice is rarely followed in practice. The pygmy seahorse is used here as an example of a phenomenon that, in my opinion, in recent years, has become much more common. This is unfortunate, and it is a clear threat to smaller marine life. 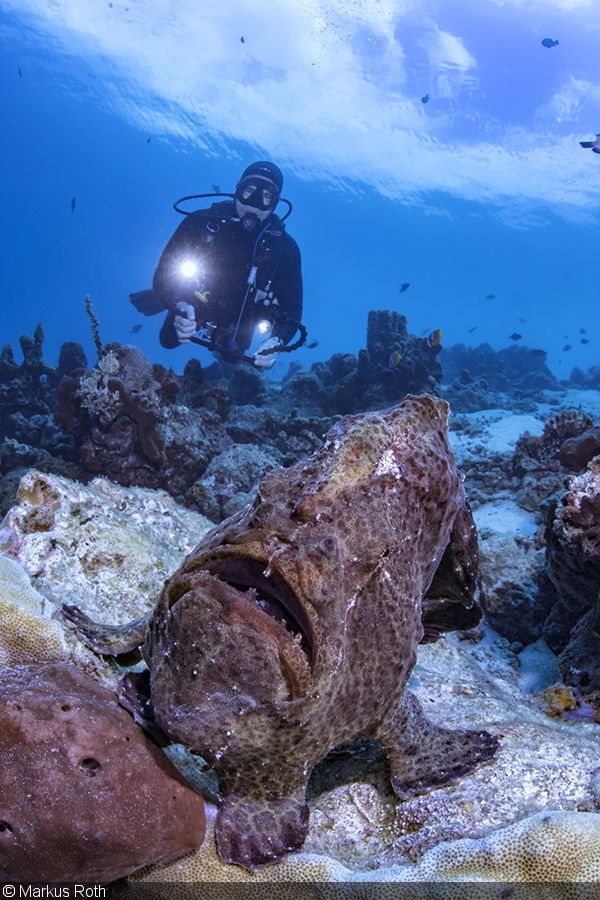 The various social media networks, such as Facebook and Instagram, certainly have a significant influence on this perception. We are confronted daily with a flood of pictures and videos, and a considerable number of photographers or videographers are on the hunt for “likes” and “followers.” Many Facebook groups that deal with the underwater world often have several thousand members, and accordingly, shooters struggle to stand out with spectacular photos.

I find tiger shrimps and octopods “flying” through blue water particularly appalling. Under normal circumstances, these creatures only leave the seabed under enormous pressure and as a last chance to escape. It is also extremely popular to move animals to a more attractive background or shallow water to avoid the no-deco time limit.

Tiger shrimp (left) and Coleman shrimp (right) are two of the most popular subjects for macro photographers, but they are also two of the most manipulated. Guides who position subjects for their guests are only trying to do their jobs and make divers happy; it is up to us to tell them what we expect and how we like to shoot

Of course, some unique encounters and behaviors equate to winning the lottery, but the frequency with which such photos are seen tells a different story. The problem of manipulation is by no means limited to social media. Occasionally, one finds pictures that have blatant creature manipulation in diving magazines or even among the winners of the popular photo contests.

Particularly problematic here is that these manipulated photos are taken as an example and reproduced. Many divers now travel with wish lists in the popular macro-diving areas and present them to their guide at the beginning of their holiday. This puts considerable pressure on the guide because he wants to satisfy the guest.

On one of my trips to Lembeh Strait, I was looking for a wonderpus octopus to photograph using a wide-angle photography technique. When I found one, I called my dive buddy and our guide. The guide abruptly flipped the octopus up off the seabed with his pointer—without any prompting. After the dive, I asked him about it, and he said that he had assumed that I wanted to take a picture of the octopus against the blue water.

The wonderpus does not like to fly; it is a bottom-dwelling creature. As photographers, we need to be very honest with ourselves, our viewers, and our guides in drawing the line on what behavior is acceptable. Don’t expect a guide supplementing their wage with tips to police your behavior; you need to be the one in charge of what is permissible on your dives

Listening to other underwater photographers and videographers, such behavior does not seem to be rare. It occurs not only in the well-known macro areas of Asia but also in the Red Sea, where Spanish dancers are picked up from the ground to take pictures of them swimming freely. The feeding of cuttlefish, scorpionfish, lionfish, and frogfish with frozen fish or shrimps killed during the dive also seems to be widespread to take a picture of the feeding behavior. Injuries to animals or killing animals as well as coral damage due to carelessness are also frequently reported.

A significant role is played by the popular close-up lenses, which allow considerable magnification. Depending on the setup, you can no longer see through the viewfinder or the camera’s LCD that you are already touching the creature or its host. Without a lot of experience or the support of a guide, it is possible to cause serious harm to subjects or their hosts. Unfortunately, this is much more common than you might think. New divers and beginner photographers should seriously consider what kind of equipment they realistically need. For instance, it would be better to start with a close-up lens with moderate magnification such as +5 rather than a high-magnification +15 diopter, which requires much more experience to use without disturbing the subject or its host. 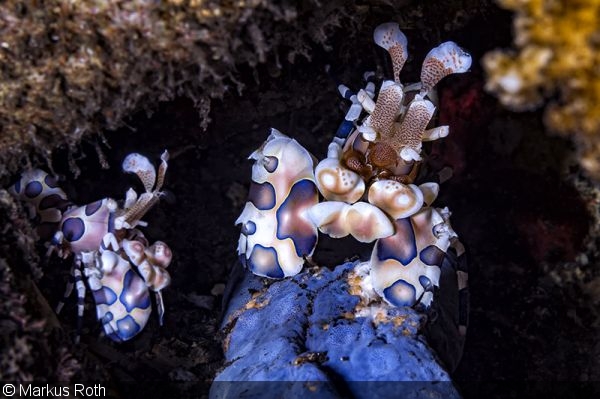 Harlequin shrimp are a favorite of underwater photographers, but they are very often manipulated and placed in environments where they don’t belong. In this shot, you can see them in their natural habitat

So how do we address these issues? First and foremost, talk to divers, guides and dive operators about any questionable behavior and don’t just look away. Guides should be freed from unnecessary pressure. The photo or the video sequence for which you have always searched should not be placed above the welfare of the animal or the ecosystem of which it is part.

You should be realistic about yourself and your abilities and not rely on equipment that you cannot entirely control. The motto to follow should be “less is often more.” Rather than taking a lot of pictures of the same animal, put more emphasis on the quality of each image. Nowadays people want everything right now—each dive should be peppered with rare animals. Try instead to be realistic about what encounters to expect, and don’t ignore the most basic principle of nature photography and observation—patience.

Another approach would be to ask dive operators to collect tips and distribute them to all their employees. This reduces the risk of guides crossing the line to get the best possible tip. The solution also extends to professionals involved in the marketing of diving. Diving magazines and photo competitions should pay close attention to which pictures are published or awarded. Finally, you should pay the animal the respect that you would demand for yourself. 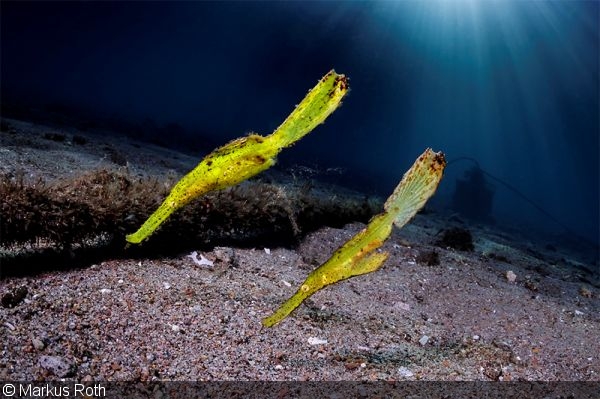 Don’t chase your subjects; let them come to you. Nobody wants to see the rear end of an animal, but the side profiles of these robust ghostpipefish are great!

At the end of the day, nobody can claim to be perfect. However, collective ignorance can be a dangerous thing, and that kind of behavior should not be tolerated. Even new divers, photographers, and videographers should not find such practices acceptable.

I try not to dictate where each person draws the line, because ultimately it is a personal decision. I am concerned with respect—respect for the smallest animal, for the guides and for the dive center owners. The reality is that everyone involved must work together to preserve the incredible diversity of life in our oceans—whether large or small.

Roger Carlson wrote:
One other thing: before taking a photo of the animal, take a practice shot. With a pygmy seahorse, get the exposure right on another part of the fan, or even another fan while you are waiting your turn. There is no need to have an animal in the frame just to get your exposure right. Take a picture with similar composition and get your settings right, then you have a good chance of taking a well exposed photo of the animal on the first try, when the animal is well posed and not stressed.

michael_m maloney wrote:
It is sad that some people are willing to do anything for fame even if it means harming the sea creatures. They should have known very well the basic rules of etiquette even before diving down to reach the animals. Those who already know the regulations but simply choose to ignore them should be banned from diving there again.

Mel Brandle wrote:
I've only ever see none of these in an aquarium. It must be so amazing to see a real live one in nature and be so close that you could touch it. But of course it's not recommended that you do right? I mean disruption of animal behaviour or something like that?
You must be logged in to comment.
Support Our Sponsors
Advertise With Us
Newsletter
Travel with us