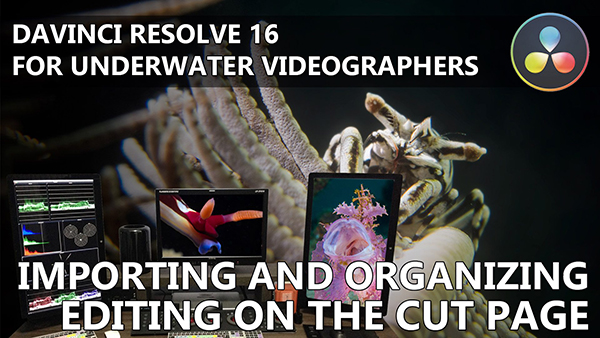 With the proliferation of GoPros and similar cameras, underwater video has become extremely easy to capture, but for many shooters, there is a huge block when it comes to getting those underwater clips up on YouTube. There’s no doubt that video editing has a steeper learning curve than editing still photos, and requires a much greater time commitment, but don’t let that stop you from diving in.

My goal with this series was to create tutorials that contain simple and easy steps everyone can follow, while using software available to anybody. Each of the episodes focuses on a single topic and takes you, step by step, through the post-production process. We are going to use Blackmagic Design’s DaVinci Resolve 16: The basic version is completely free, and it has everything you need to edit underwater video.

So, go out, shoot some video, and watch this series to learn how you can easily begin to wow your audience with quality short movies.

A sample video after the initial stages of the post-production process: Importing and organizing your video clips, and then editing them together

The first of our tutorials tells you how to get set up and started in DaVinci Resolve 16, and how to organize your media and import it into your project.

Editing on the Cut Page

In the second tutorial, we deal with how to make your first edits and cuts using DaVinci Resolve. We go step by step and show you how simple this process really is.

In the next tutorial, we will go into editing the footage together, doing some effects with tracking, and stabilizing that shaky footage—followed by adding music, syncing to music, and some finishing touches. Don’t be intimidated by video editing, just jump in and get your hands dirty!

About Jonathan Venn: Jonathan Venn left the UK and washed ashore in the Philippines years ago. Originally an instructor in Puerto Galera, he moved on to starting his own dive shop, which ultimately turned into Blue Ribbon Dive Resort. In his years there, he got into video and developed an extensive library of footage on the local dive sites. A little over a year ago, he moved the resort to Anilao, and he has been loving it ever since. Today, you can find him running his resort, teaching new divers, and building a video library of all the sites in Anilao. Recently, he began working on commercial video projects involving black-water video. See more of Jonathan’s videos on his YouTube channel or follow him on Facebook and Instagram. Be sure to check out Jonathan’s primer on underwater macro videography on DPG.

Marc Dutour wrote:
Very nice ! :)
You must be logged in to comment.
Support Our Sponsors
Advertise With Us
Newsletter
Travel with us