S-Curves
By Jeremy Kozman, April 15, 2010 @ 08:05 PM (EST)
My dad and I are dive buddies, and last July we traveled to Morehead City for a long weekend of diving.  Unfortunately, the weather was against us and we sat on the beach until the last day.  With only two short dives, I wasn’t expecting many usable images.  Was I wrong!  I came home with a bunch of keepers, 3 images that have won awards, and some great memories. 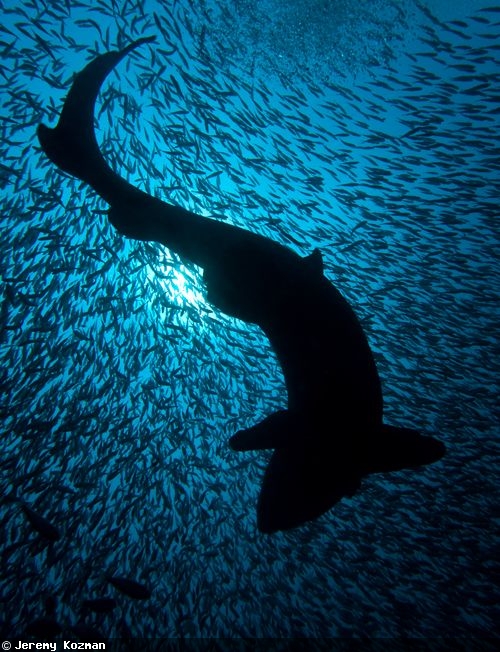 I’ve often read that luck is what happens when preparation meets opportunity.  With that in mind, I followed the advice of the pros and set goals before I entered the water.  One was practicing silhouettes.  I knew from experience that we were likely to meet some big sand tiger sharks.  The image I had in mind was of a big sand tiger blocking the sun, with rays of light radiating outward.  I reviewed my technique and made sure my camera was set up properly.  North Carolina wrecks are deep, so I wanted to have everything ready before I splashed.

Our first dive was on the U-352, and I managed to shoot a panorama of the entire wreck (another of my goals).  Then we made for the Spar, an old Coast Guard buoy tender sunk as an artificial reef.  I’d never been there before, so I asked the captain to describe the strongest feature of the wreck.  He said to look for big sand tigers swimming through a bait ball at 80 feet, just above the bridge.  Since the main part of the wreck is around 100 feet, I might have missed the bait ball without his advice.  As it was, we found it and several big sharks, just as advertised.  As the sharks circled leisurely, the school would separate around them and reform behind.  The flowing scene was very dramatic; we spent our entire dive in that spot.

After taking some strobe shots, I dropped below the bait ball for silhouettes.  With the ISO set at 100, I chose a fast shutter speed to freeze any possible rays of light.  Then I spot-metered to the side of the sun, got a reading of f/11, and began shooting.  I wanted to get the shark blocking the sun ball with her body.  Several sharks obliged, and I got some nice images.  This one was my favorite because of the S-shaped line of the shark’s body.  The outtakes were ok, but they didn’t convey the grace of this image.

Photography books mention six elements of composition:  line, shape, form, texture, pattern, and color.  In “Learning to See Creatively”, Bryan Peterson states that line is the strongest of these elements.  He also mentions that simple images are often the most successful, because they read at a glance.  This images works for me because of these two ideas.  Everything came together to create an image with a single, strong compositional element, and one with few distractions.

I was fortunate to be in the right place, at the right time, with the right equipment.  Even though we only spent about 60 minutes under water that day, I came home with some great images.  Preparation before the dive and the captain’s knowledge were the keys to getting the shot.
About The Author
When he's not diving, Jeremy Kozman teaches middle and high school instrumental music in Hilliard, Ohio. In addition to the Divephotoguide.com contest, his images have recently won awards in the 2010 Our World Underwater and the 2010 Beneath the Seas competitions.

anamikahujka singhs wrote:
It's a Good Article
You must be logged in to comment.
Support Our Sponsors
Advertise With Us
Newsletter
Travel with us