In this latest article in The Guide, DPG talks about the scourge of plastic pollution in our seas with writer Adam Skolnick, an ambassador for non-profit pressure group 5Gyres. 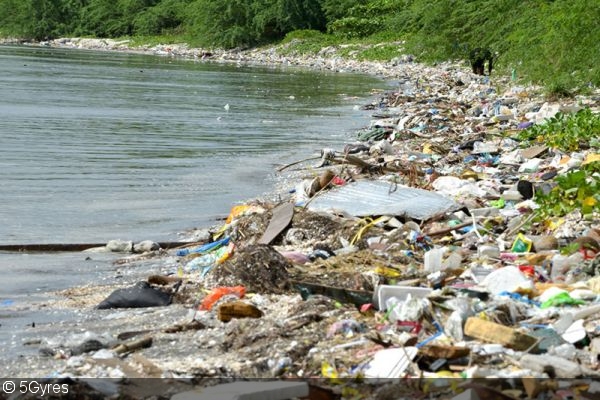 Plastic pollution is one of the two greatest man-made environmental disasters facing humans today. The other is climate change.
—Adam Skolnick

As divers, we are naturally prone to being ambassadors for our world’s oceans. But while it’s easy to cry foul about animals that we so love, such as whales, sharks and dolphins, what is far less glamorous is addressing issues caused by our own daily impact. One of the more notable issues that we are all guilty of contributing to is plastic pollution.

Plastic is so ubiquitous that it’s difficult to imagine a world without it, much less escape it. So what can we do to educate ourselves, our peers and the world about this rampant issue? Recently, I sat down with writer and 5Gyres ambassador Adam Skolnick about some of the research he has done on plastics, and about the advocacy that 5Gyres is lobbying for in the US. 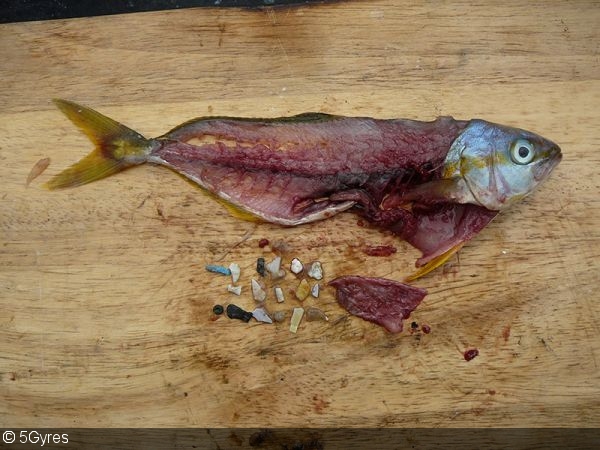 Lia Barrett: What are microplastics and why are they such a threat to our environment?

Adam Skolnick: Microplastics are exactly that: microscopic pieces of plastic that occur after larger pieces of plastic are broken down by exposure to sun, salt water, currents and time in a marine environment. Unlike glass, paper, or metal, which all break down completely over time, plastic does not. Instead, it breaks down into microscopic pieces the size of plankton, which can bond with other toxins in the ocean, such as mercury, and are often ingested by fish, which are eaten by other fish, which are in turn eaten by us. That’s how toxified plastic enters the food chain. 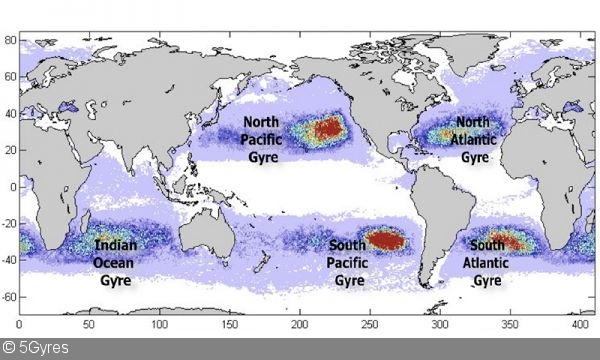 Plastic trash finds its way to five main gyres—massive, slowly rotating whirlpools—where it breaks down and is then redistributed across the globe

Lia: Describe the gyre phenomenon taking place in our oceans.

Adam: The threat is enormous: 300 million tonnes of plastic are produced each year, and roughly 10 percent is recycled. Fifty percent of the rest is burned or buried in landfills, and the remainder makes its way into the marine environment. We are talking about trillions of tonnes by now.

That plastic moves with wind and water currents to five main gyres (the center of a current system), one each in the North and South Pacific and Atlantic and one in the Indian Ocean. That’s where much of it breaks down, sinks and gets redistributed by underwater currents all over the world. That’s why, wherever you’ll look—deep-sea sediment, Arctic ice cores, at the surface of a seemingly pristine sea, or on remote beaches—you are likely to see plastic trash. Most of it microplastic. To put it simply, there is a smog of microplastics in almost every square inch of ocean, the world over. 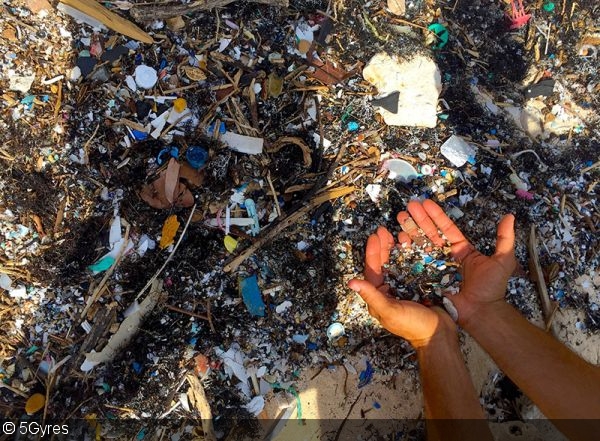 Lia: You are an ambassador for the non-profit 5Gyres with other celebrities and athletes like Jack Johnson and Kimi Werner. Tell us about your work with them and what they are doing to combat this issue.

Adam: I've known Marcus and Anna, the founders of 5Gyres, for years, but it wasn’t until the summer of 2015, while on an expedition with Marcus, Kimi, Jack, Dan and Keith Malloy and others through the North Atlantic Gyre that I understood the scope of the problem. I wrote a story about it for Organic Life and haven’t been able to move on completely. Jack Johnson has long been a champion in the fight against marine plastics. I’m fairly new to the issue, and don’t have a platform like those guys, but it’s become my number one cause. Wherever and whenever I’m asked to speak professionally, I always talk about it and about 5Gyres’ work. In my opinion, it is one of the two greatest man-made environmental disasters facing humans today. The other is climate change. 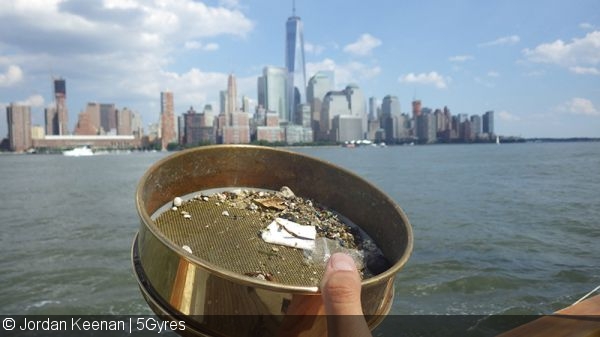 Lia: What can we do in our everyday life to help curb this problem?

Adam: We should all reduce consumption of single-use plastic. No more disposable water bottles. Pre-empt the straws with servers and bartenders. Be done with balloons. Bring your own bag/bottle wherever you go and wooden utensils too. But this cannot be about consumer choice exclusively. Often we buy what is allowed in the marketplace, and if you step into any supermarket, 80 percent of what you see is wrapped in single-use plastic. It’s insane, makes no sense, and unless governments step in and ban the use of single-use plastic, there will continue to be a smog of microplastics in the sea.

We need a closed-loop system, where companies are responsible for the reuse, recycling or disposal of whatever they put out into the world. As it stands now, companies can manufacture almost anything, take all the profit, and cash-strapped governments are responsible for disposal. That’s unfair and unsustainable. It has to change. And it can change. 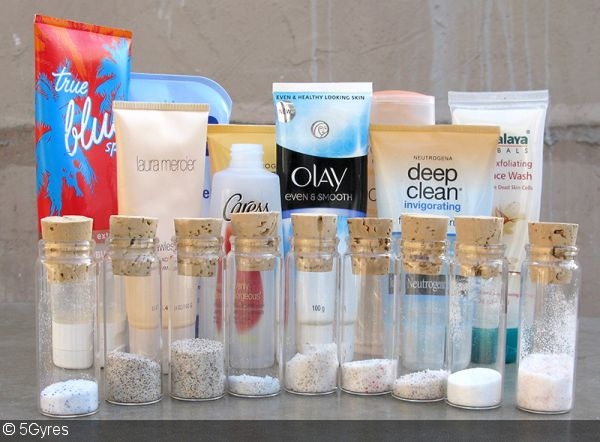 After campaigns from pressure groups, the US banned the production of personal care products containing plastic microbeads—the law goes into effect from July 2017

Lia: What progress has been made on this issue?

Adam: In the US, the microbead campaign has been a success. Microbeads are plastic beads found in scrubs, toothpaste and other beauty products. They are so small, they were escaping wastewater treatment facilities and being found in lakes and rivers all over the world. 5Gyres and other like-minded groups led a campaign to ban the sale and use of microbeads in California last year. They won, and within weeks, the US Congress followed California’s lead. That's the kind of political action it will take to get ahead on plastics. Citizens should be outraged, and focus our outrage at lawmakers in a useful way, and demand change.

One day, we will move on from plastics. There's no other way, the evidence is too damning and nobody is in favor of consciously poisoning our seas or ourselves. But for now, we still live in the Plasticine Age, and it’s up to us to end it. 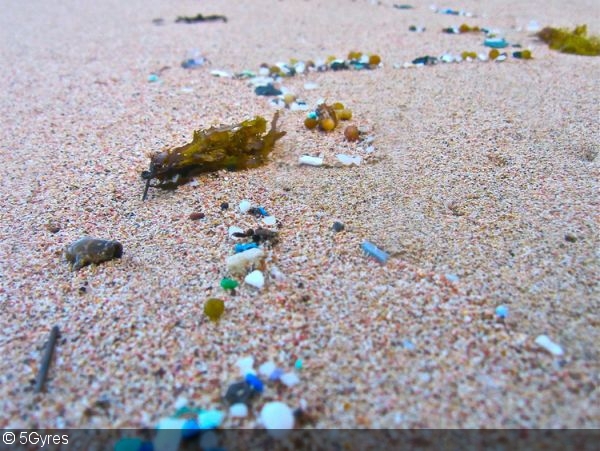 Adam Skolnick’s book “One Breath: Freediving, Death, and the Quest to Shatter Human Limits” is available from Barnes and Noble, Amazon.com, and a variety of other outlets. More information can be found on OneBreathBook.com or Adam Skolnick’s official website.

edouard mollard wrote:
my god..
You must be logged in to comment.
Support Our Sponsors
Advertise With Us
Newsletter
Travel with us