Editor’s Note: The image “OCD Diver Tries to Right Shipwreck” recently captured awards in the DEEP Indonesia and Underwater Photographer of the Year competitions and was published in Outside magazine. 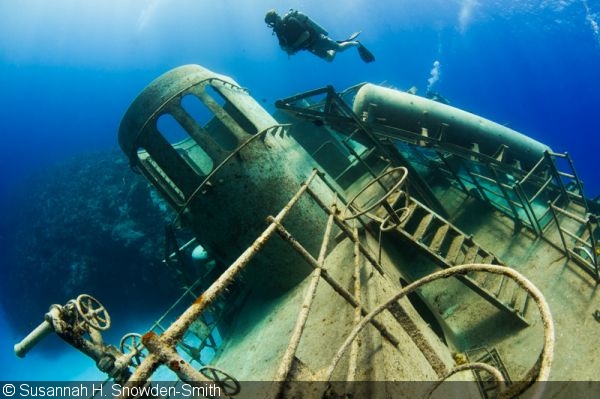 I’m a wreck junkie. I love diving them, and I love photographing them. Ancient or modern, it doesn’t matter so long as I have a camera in my hand. That’s why I’m so lucky to have the ex-USS Kittiwake shipwreck in my backyard of Grand Cayman. I’ve done dozens of dives on the wreck. But how to keep the images fresh? Late last year, I would have an opportunity to answer this question.

In October 2017, Hurricane Nate skirted Grand Cayman. While the island was largely spared from damage, its underwater treasures weren’t all so lucky. During drinks at the famed Sunset House, I overheard a local dive boat captain exclaim, “The Kittiwake has rolled!”

I immediately scrambled to find a boat to take me out to dive the wreck early the next day. After tying up to one of the Kittiwake’s mooring balls and rolling into the water we were shocked to find… nothing.

At 251 feet long, the Kittiwake should be hard to miss—and hard to move—but move she had. We swam west toward the deep wall, as the hull of the ship emerged from the blue on our approach. As a testament to the strength and depth of Nate’s surge, the massive wreck hadn’t just rolled: She had been moved significantly and now rested on her side next to the reef along the deep wall. 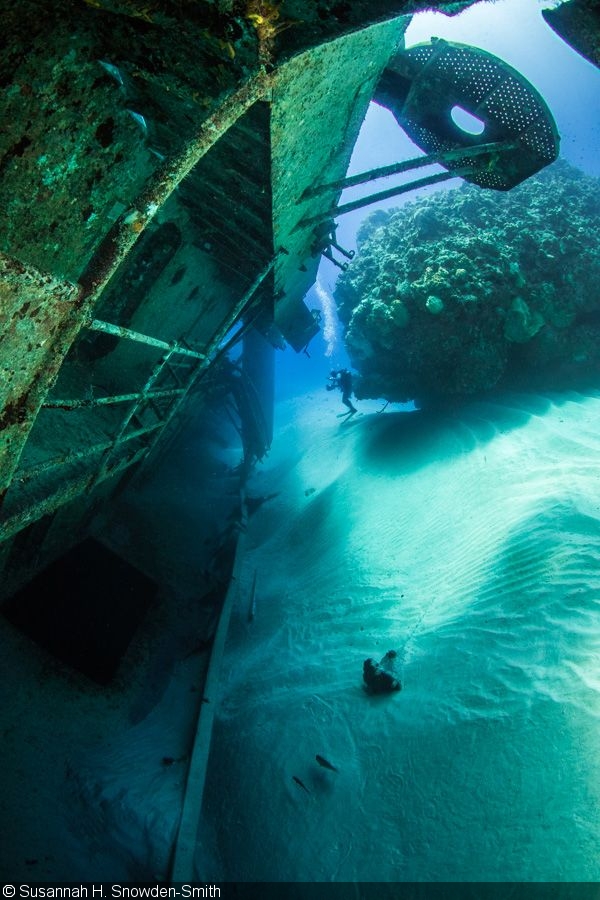 A diver stands in the sand along the port side as he prepares to photograph the ex-USS Kittiwake, rolled onto its side by Hurricane Nate 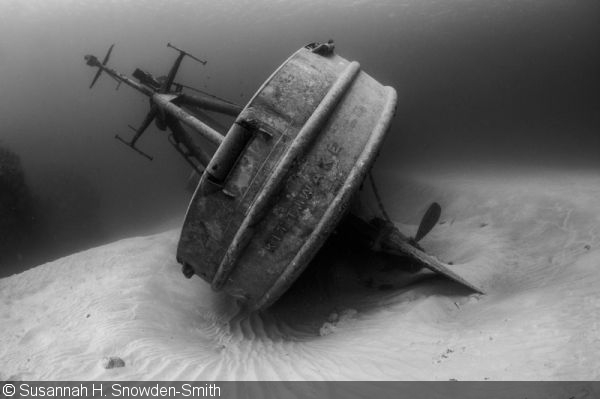 A documentary shot of the new position: But how could I make it really unique?

Having dived the wreck so many times, the sight of it on its side induced vertigo. Eventually, I was able to get my bearings and arrived at the stern of the ship—an iconic location where thousands of tourists have posed for a souvenir shot. The Kittiwake lettering raised in white stands out against the ship’s patina. Only now, it’s askew.

A few nights later, while editing photos from that dive, a lightbulb moment happened: “Wouldn’t it be funny if someone with obsessive compulsive disorder (OCD) was so bothered by the wreck being on its side that they tried to right it?” The idea for a photo was born. 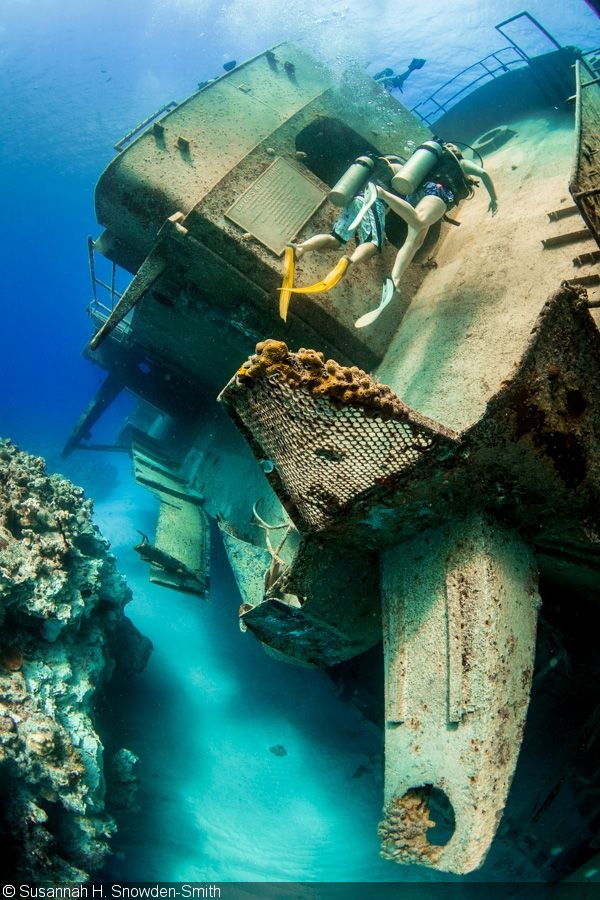 Of course, I would need to find a model to act as my “diver with OCD” for the shot. Fortunately, my friend Simon arrived from Belgium a few days later and he happily agreed to take the job. We thoroughly discussed how the shot would be executed by planning where I hoped Simon would be able to stand, where I would be shooting from, and what signals we would use to communicate.

Simon had never dived the ship before, but unselfishly he agreed to model as long as it took to get the shot: We’d explore afterward if there was indeed time. We floated down onto the wreck and I was pleased to discover that Simon could stand upright and press against the ship, dwarfing him in size. We used hand signals to communicate, until he was in the perfect position. 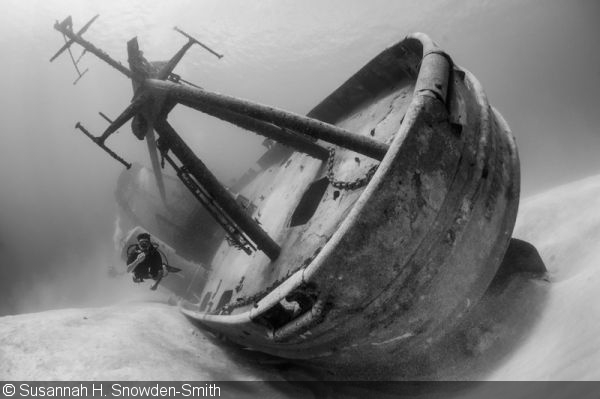 Simon pushed on the ship, but the first attempts were acted out and realism was lacking. I signaled for him to do it again, and again. He would later remark, “I realized that if I wanted it to look like I was trying to right the ship, I should try to right the ship.” His streaming bubbles are from this effort. This realistic approach resulted in the final photograph—exactly how I had envisioned the scene in my mind. 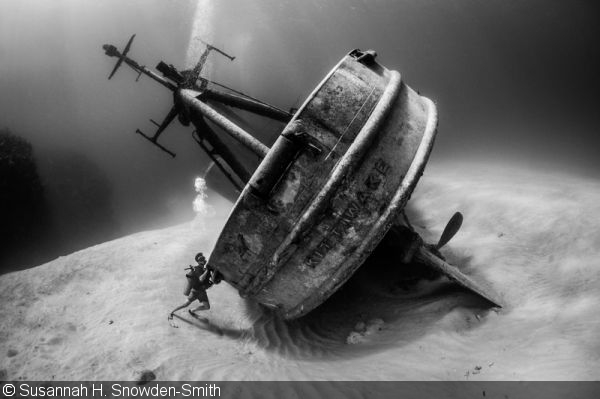 The final image: By actually trying to push over the massive wreck, the diver adds a sense of realism to the photo

About the Author: Susannah H. Snowden-Smith is an underwater photographer based in Grand Cayman. She and her husband moved there three years ago in part for the underwater photography opportunities it offers. She wishes to thank Lobster Pot Diving Center for their ongoing support, as well as Off The Wall Divers, her husband Donald Parker Smith and, of course, dive model and friend Simon Claeys.

Jerome Voiture wrote:
Marvellous pictures!! I love!
You must be logged in to comment.
Support Our Sponsors
Advertise With Us
Newsletter
Travel with us