Underwater, nighttime is hunting time. And to dive at night puts you in the middle of survival of the fittest.

Night dives have always peaked my interest because of the many things you can see at night that aren’t there during the day. Numerous creatures sleep when it’s light and only come out in the dark. This quickly turns a once-familiar dive spot into something different—full of brighter colors, sharper contrast and a brand new array of creatures. 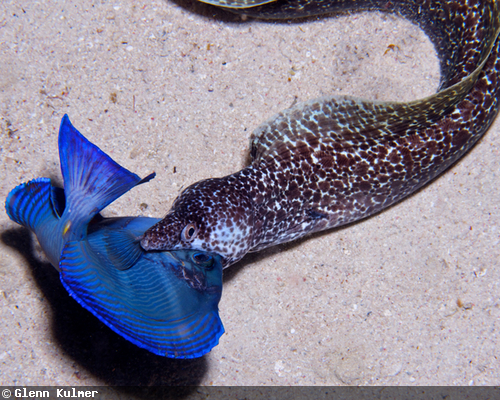 The particular dive on which this photo was taken was a quiet night in January on the island of Grand Cayman.

It wasn’t until the end of our dive off of the Sunset House Reef that I captured this photo. We were swimming back to shore, wall to our right, when movement near the wall captured my attention. I turned, camera in hand, ready for action, and saw a Spotted Moray Eel grab onto a Blue Tang.

The eel’s jaws snapped tight around the helpless fish and I snapped photos. The eel wrapped itself around the tang and they fell off the wall and in a free fall to the sand below. After a short fight, the tang was released from its captor. 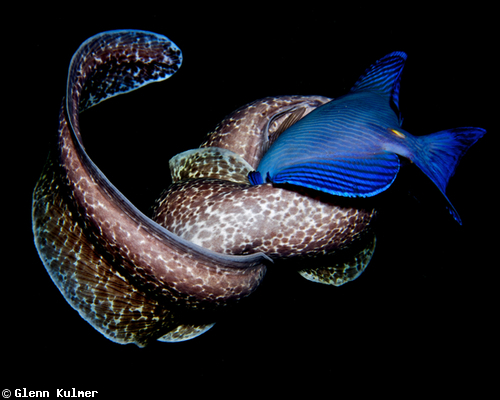 As this was a “live” action shot, there wasn’t really time to make any changes in my camera settings. My biggest challenge was framing and focusing on the squirming subjects. It was not until I was back on shore, looking through the photographs of the dive, that I realized how impressive and perfectly timed these pictures were.

The winning shot was actually the first taken in the sequence. I also entered the second and third shots in the contest. I was surprised that the second shot didn’t win as it shows the eel and fish tangled up and free falling. Some people would say I got lucky: right place, right time, and certainly I was.

Maybe luck had a bit to do with it, but as anyone interested in underwater photography knows, there are always amazing shots waiting to be taken. But you have to be aware and you have to be ready – finger on the trigger –  at all times. Whether it was luck, a ready trigger finger or a combination of both, that short struggle produced some amazing photos and I will never forget that eel and that blue tang on the wall in Grand Cayman. 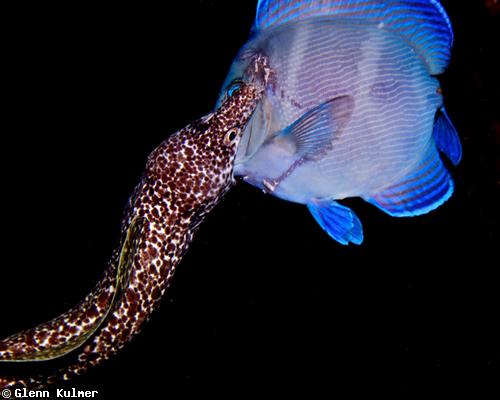 Sylvia Barthorpe wrote:
These photos are amazing, yes, a bit of right time right place, but i would think its alot to do with experience aswell. I am just getting into photography and would love to be able to produce photos like these in the future. Congrats.
You must be logged in to comment.
Support Our Sponsors
Advertise With Us
Newsletter
Travel with us