Backlit Blenny
By Mark Fuller, April 29, 2010 @ 11:42 AM (EST)
I have really got into shooting  macro in the last few months. Even though I am fairly new to underwater photography,  I have only been shooting for around 3 years now, I decided I wanted really focus on super macro.

I was inspired by the creativeness in the  winning images of Keri Wilk in the Our World Underwater and Deep Indonesia 2010 contests which utilized a  snoot for lighting small macro subjects. I decided that this is definitely the route I want to go down—super macro snoot photography.

I made a DIY snoot that fits snug over my strobe head and gives off a beam of around 3mm. I'm very lucky in that I live only 30 minutes away from Eilat's red sea, so I try dive at least once a week. This gives me the opportunity to practice to my snoot photography. 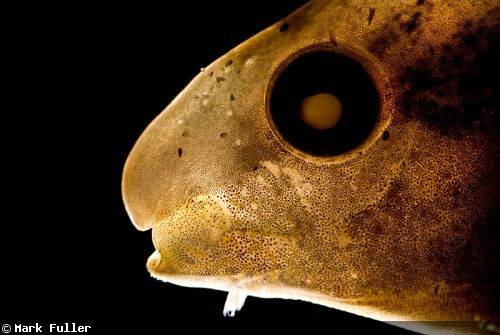 I saw this blenny on a previous dive and shot him towards the end of the dive, so I just never had enough time. I decided to go back and spend the whole dive with it to try and get something special. My first thought was to capture a front shot of him filling the frame and wait for a yawn, but and I missed the "underwater scream!" Half way through the dive I had the idea that I would backlight him. He isn't the prettiest blenny around but with the light coming from the back I thought it would give him a lovely gold glow which would create an unusual look and something different.

I took the day off and did a morning dive hoping the would still be where it was the week before. Luckily it was. It was a pretty shallow dive, around 5 meters, so I could take my time.

I didn't have a gorillapod (as Keri Wilk suggests using in his snoot article) for the strobe so I had to disconnect and hand hold the strobe in my left hand and shoot with my right. This meant I had to take 30 second brakes every few minutes as my arm was killing me.

The snoot tip was around a pen size and quiet short and held very close to the subject. My smaller extension wasn't producing enough light for the depth of field I needed. He never swam away and seemed quiet comfortable with me being there. The only problem I had was he always seemed to turn and look at the snoot or the camera and I wanted the side shot. 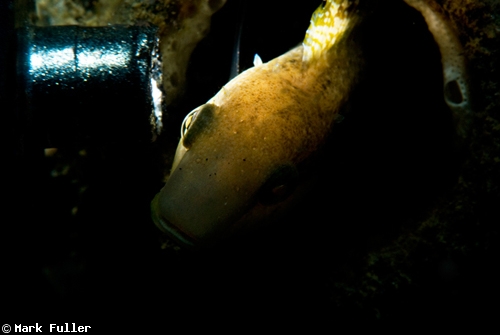 My first few shots were over or under exposed, but once I found the optimal setting it was just a matter of framing the blenny as I wanted. I shot at a high shutter speed as the light was coming towards the camera and I didn't want to overexpose the image.

I must say shooting with one hand, holding and pointing a strobe with another and trying to focus with a Subsee Adapter isn't the easiest of tasks. It takes some practice and a lot of frustrating hours.

I was very happy to have gone into the water with a plan and to come out with a satisfying result.

Jeffrey De Guzman wrote:
Thanks for sharing your technique Mark.
You must be logged in to comment.
Support Our Sponsors
Advertise With Us
Newsletter
Travel with us