Expect The Unexpected
By Laz Ruda, August 10, 2010 @ 12:38 PM (EST)
By Laz Ruda
Expect the unexpected — these are the words I use to describe diving in Palm Beach, Florida. This hidden ocean oasis with its vast number of reefs, wrecks, and a world class muck site is a haven for all kinds of marine life both small and large. As a local dive guide I visit many of the same dive sites frequently, but still they lack any degree of monotony in my eyes. Something new is always waiting around the next coral head.

Heading three miles south from the Lake Worth inlet, in sixty feet of water is one of the most popular reefs in Palm Beach — Breaker’s reef. This reef lies a mile offshore of the famous Breaker’s hotel. An inshore ledge runs north and south with small fingers every couple of feet veering west and east. The top of the reef sits in forty-five feet of water.

Breaker’s reef is adorned with soft corals, hard corals, and sponges in every color of the rainbow. Add to this a very healthy mix of fish life. But it doesn’t stop there, in fact, rarely can you dive Breaker’s reef that you will not come across a sea turtle. If it’s sea turtle nesting season you’re likely to think you’re at a Jimmy Buffett tailgate party for turtles. 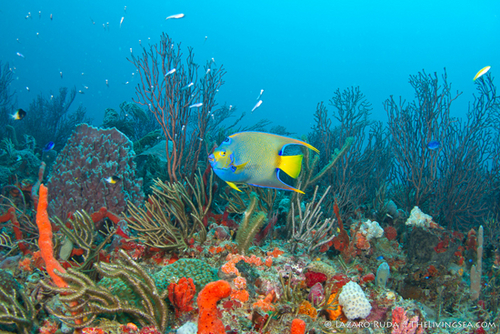 Breaker's reef in Palm Beach, Florida
Rare encounters are something of a regularity on this reef. On days where I’m stuck doing office duties there is no worse torture than having to listen to all the dive boat radio chatter as it echos throughout the office walls. Rare elasmobranchs of all kind such as great hammerheads are often encountered. Even the more common nurse sharks show up in unimaginable numbers every season in order to mate.

Of all the amazing and rare encounter it was perhaps a humpback whale inshore of Breaker’s reef in 40 feet of water that held the title for the unexpected. But Breaker’s reef was to up the ante once again. 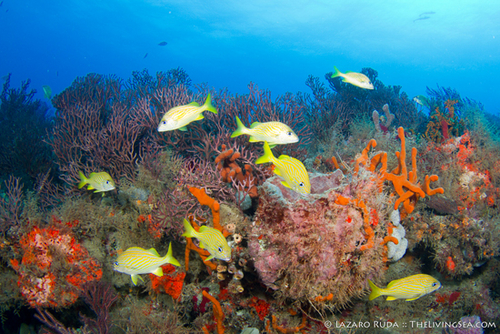 Breaker's reef - a dive site where the unexpected should be expected
Before beginning my guided dive I drew up a profile of the reef along with some cartoon fish characters on a white board. Drawing these briefings allow the divers not only to get a visual of the dive site, but also to make them believe I have a couple of remote controlled critters running around Breaker’s reef. “You will find a nurse shark and a stingray on the last finger of the reef,” I tell the divers. I get a look of disbelief every time, but some things on Breaker’s I can almost predict with certainty. I’m not sure why they do it, but the nurse shark and stingray are almost always there.

The captain navigated half a nautical mile south past the north end of Breaker’s reef so my group of divers could enjoy a drift dive across this coral oasis. Tropical fish of all shapes and colors enveloped the reef. Forty-five minutes into the dive only two divers remained with me. It was at that time when we reached the jump point to Turtle Mound — a large patch coral just a couple minutes swim from the end of Breaker’s reef. Aptly named, Turtle Mound is named because of the large number of sea turtles that congregate in this area; using the shelf-like ledge as a kind of underwater bunk bed.

As we began our lazy swim across the sand to Turtle Mound, I noticed a dark figure resting in the sand. This area is always full of surprises such as sea turtles, large stingrays, and sharks of all kind. I wasted little time to navigate closer to see what Turtle Mound had in store for me today. With visibility ranging in the 40 - 50 foot range, discerning the dark shadow in the sand was difficult and my mind made the assumption that it was a large southern stingray. Closer and closer I approached with both divers closely behind.

When it’s shape finally registered in my mind my head swirled with emotions -- a salt water crocodile!  I was excited beyond belief. I was simultaneously nervous — more so for the pressures of knowing that this very rare opportunity was not likely to happen to me again and I had one chance to get a photo. While my danger meter was pegged on redline I felt pretty assure of this close encounter because I had previous experience with this animal in other areas. 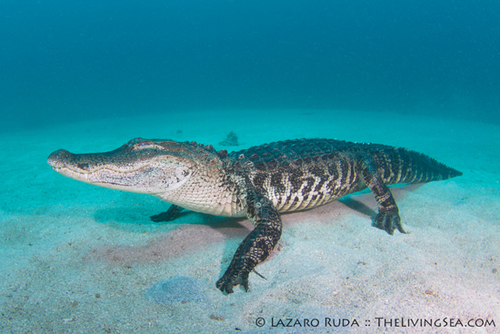 The two divers following me had noticed the dark shadow looming thirty feet before me. No longer did they follow me so closely. I composed myself and slowly crawled forward in hopes of not spooking this amazing animal. I took a quick, distant snapshot to proof to others of what I was encountering should I not be able to get another shot; whether from spooking it away or for becoming the recipient of the Darwin award.

Unfrazzled by me, this beastly creature did not twitch a muscle. It sat perfectly still in a trance with its eyes shut. I was beside myself as I approached within hand’s reach of it. I was ecstatic to think that right at this moment I was checking off another experience on my bucket list. If I smiled any bigger I would have certainly flooded my mask.

I continued to take photos of it; adjusting my strobes, but with a weary eye always on this seven foot creature. With my Tokina 10-17mm fisheye lens attached to the camera I needed to get in really close for a dramatic shot. Less than one foot was ideal, but for sanity’s sake I lingered around one to two feet.

From the back of my camera’s LCD screen with every flash of the strobe the image for my bucket list glowed in all its splendor.  I was happy as can be while my heart raced faster than a Formula One race car.

One of my divers, John Karuza, cautiously swam around to have his photo taken with the crocodile; keeping a safe twenty foot distance between him and the crocodile. The second diver, having no interest in being nominated for the Darwin Award, stayed back fumbling to reach for his dive knife. 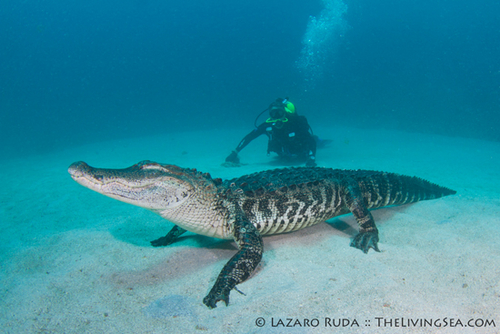 After taking a couple more pictures, I lowered the camera down for a few seconds to admire this amazing creature when the lightbulb in my head suddenly illuminated. “Hmmm.. Its jaw seems a little wide for a salt water crocodile,” I thought to myself. I began to count the teeth beginning from the front of its mouth. “One...Two...Three... Four?? The four tooth is not right!”, I told myself. The fourth tooth on the salt water crocodiles of Florida comes from the bottom up.

This man is an imposture — a fresh water alligator! “An alligator?!?!”, I puzzled through my mind. How could this be? The closest inlet, if he was swimming with the northerly current, was ten miles south of here. He’s down in sixty feet of water!

The vision of my friends laughing in full glory filled my mind. “These jokers have played the ultimate hoax on me,” I told myself. Somehow they found a realistic-looking taxidermy alligator and placed it on the reef where they knew I would find it, I thought. I laughed a bit and decided to play along. My fear replaced with humor as I approached closer to photograph it.

Suddenly it’s eyes opened! A protective membrane in semi-translucent, iridescent purple covered the cat-like eye that was locked on my every movement. Its front claw-filled leg swaying its step ever so slowly towards me.

Dr. Frankenstein’s scream reverberated in my head, “He’s alive!” There was no time to answer the many questions running through my head — it was time for action! In a split second I hit the switches on my Nauticam underwater housing and the Canon 7D was rolling video. “No one is going to believe this!”, I told myself.
The alligator swayed back and forth. It’s eyes still locked on me. Every piece of video footage I’ve ever seen on the Discovery channel of gators lunging at their victims played in my head like a TV out of control. My arms, outstretched to lengths that would make Stretch Armstrong proud, held the shaking camera at its very end.

With one final movement, the alligator turned away from me and with a few sways of its powerful tail it rocketed to the surface, disappearing into the hazy distance. What he left behind were three very lucky divers — lucky to have the experience of a lifetime.
In hindsight, all those moments of fear were conjured up by nothing more than my overactive imagination and way too many over dramatized Discovery channel TV shows. Showing these animals out of context, only while feeding on their natural prey, I feel does them, and the many other maligned-labeled creatures, a great injustice. This experience and my many forays into the swamps of Florida to photograph alligators has drawn a different picture in my mind. Not one of an indiscriminate and voracious monster, but an admirability for a creature who has survived the tests of time.

Was this alligator taking the first steps towards a new evolutionary transformation? Who knows? Perhaps one day alligators will roam the oceans of the world, but I couldn’t help but be concerned for the well being of this alligator I had encountered. Alligators are not equipped to handle long exposures to salt water. While they do have the same salt glands of their close cousin, the salt water crocodile, these glands are not operational on the alligator; they have no way to excrete excess salt. If the alligator spends too much time in the ocean it will eventually die. 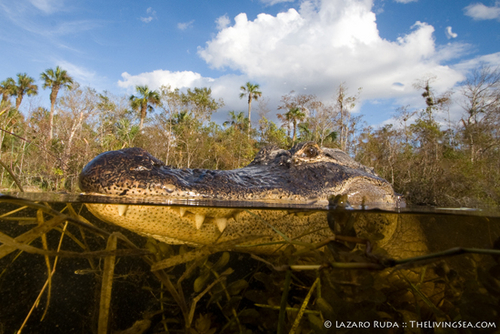 An alligator in its natural freshwater habitat at the Big Cypress National Preserve
With the alligator no where in sight we radioed for some assistance from the Florida Fish and Wildlife Conservation Commision (FWC). We were hopeful they would be able to capture the alligator and return it to its natural environment. We aimlessly searched with no success. I worried for the well being of this poor, lost creature.

The story and images of this rare underwater encounter captured the attention of many news stations. A few days after the encounter I received a couple of emails from a biologist, James Clyde Nifong, who mentioned the alligator had been captured and released back into its natural habitat. I hoped so much it was the same alligator I had encountered. A few days later an email was sent to me by the two brave men, Jason Intoppa and Harry Holstein of West Palm Beach, who captured and held the gator until the FWC arrived at the scene. Pictures of the gator confirmed it was the same one I had encountered; identified by a distinctive dark marking on the bottom left jaw of the alligator.

Expect the unexpected is a term that is replayed again and again in the amazing waters of Palm Beach, Florida. In this case, not only was the alligator encounter in sixty feet of water on the reef a very unexpected event, but to hear of its safe return back to its natural habitat one I never expected to hear.

About The Author
Raised in south Florida, Lazaro Ruda has been around water his entire life. In 2003 he grabbed his first underwater camera and began to photograph this magical underwater world. Through his web site, TheLivingSea.com, he shares his love, passion, and understanding of the natural world in hopes that others will learn to appreciate it and become better stewards of our blue planet.

Matt J. Weiss wrote:
I agree, Eric. Laz managed to take full advantage, too. What a story.
You must be logged in to comment.
Support Our Sponsors
Advertise With Us
Newsletter
Travel with us