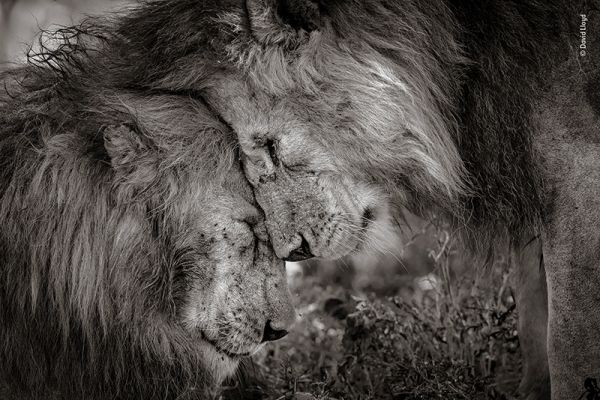 The UK’s Natural History Museum has announced the winner of the Wildlife Photographer of the Year LUMIX People’s Choice Award. The image of two nuzzling lions by New Zealand-born, London-based pro fine art wildlife photographer David Lloyd received the most votes from the 16,000 people who voted. The photo was one of 25 shortlisted images selected by the Natural History Museum from the more than 45,000 entries in last year’s competition.

The remaining images in the top five, which were “Highly Commended,” are a fox walking towards a piece of Banksy-esque street art, by Matthew Maran; a gut-wrenching shot of an emaciated polar bear, by Justin Hofman; three painted wolves toying with an impala’s leg, by Bence Máté; and three king penguins on a beach, by Wim Van Den Heever.

The judges of the 2019 Wildlife Photographer of the Year are currently considering this year’s entries, with the winners announced in October. Check out the images in the underwater category of last year’s competition here.

A heart-warming image depicting a unique moment between a pair of male lions is the winner of the Wildlife Photographer of the Year LUMIX People's Choice Award. 16,000 nature fans voted, and London-based photographer David Lloyd’s picture, Bond of Brothers, emerged as the favourite.

The two adult males, likely to be brothers, greeted and rubbed faces for around 30 seconds before settling down. It is unusual for lions to nuzzle for so long, and David was honoured to have experienced and captured such a moment.

David says, ‘I’m so pleased that this image did well because it illustrates the emotion and feeling of animals and emphasises that this is not limited to humans. It is something I think more people need to be aware of for the sake of all animals.’

Director of the Natural History Museum, Sir Michael Dixon, says, ‘Lions are individuals with complex social bonds, and David’s winning picture provides a glimpse into their inner world. A truly stunning photograph, this intimate portrait reminds us that humans aren’t the only sentient beings on this planet. I hope the empathy and wonder garnered by this image will inspire more people to become advocates for nature.’

Mike Owen, Professional Imaging Marketing Manager from Panasonic UK, adds, ‘It is a great honour to be involved in the LUMIX People’s Choice awards and to be able to champion the image that resonates most with the public. David’s image does just that and shows a heart-warming connection between two animals that are usually perceived as hunters and fighters. So much of wildlife photography is being in the right place at the right time, but capturing that split second is often a result of planning, patience and understanding the subject. Congratulations to David for capturing this striking image.’

Four ‘Highly Commended’ images won over the hearts of the public, making it into the top five. These include Matthew Maran’s timely shot of a fox walking towards graffiti art in London, and Justin Hofman’s heart-breaking image of a famished polar bear in the Canadian Arctic. Hungarian photographer Bence Máté also features with a picture of three painted wolves playing with the leg of an impala, and Wim Van Den Heever with a sublime shot of three king penguins on a beach in the Falkland Islands.

Wildlife Photographer of the Year is the Natural History Museum’s annual showcase of the world's best nature photography and photojournalism. Seen by millions of people all over the world, the images celebrate the astonishing diversity of life on earth, whilst challenging us to address the big questions facing our planet. The fifty-fifth competition is currently being judged by an esteemed panel of experts, and the winners will be revealed in October 2019.

The LUMIX People’s Choice award is newly named from 2018 to reflect LUMIX’s recent Associate Partnership with the Natural History Museum’s Wildlife Photographer of the Year exhibition in London. Renewable energy company Ørsted is also an Associate Sponsor for the exhibition, open until 30 June. 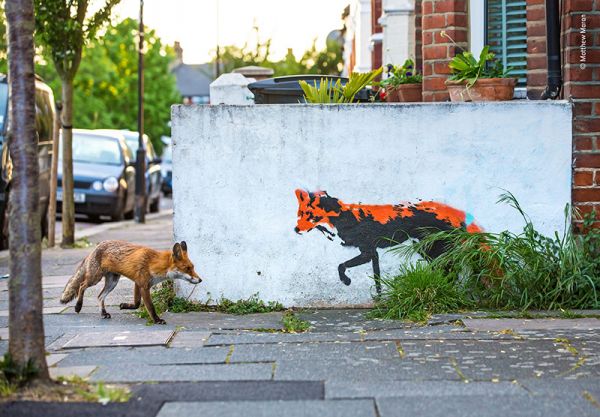 Fox Meets Fox by Matthew Maran, UK: Matthew has been photographing foxes close to his home in north London for over a year and ever since spotting this street art had dreamt of capturing this image. After countless hours and many failed attempts his persistence paid off. Canon EOS 5D Mark III + 70-200mm f2.8 IS II USM lens; 1/500 sec at f4.0; ISO 800. 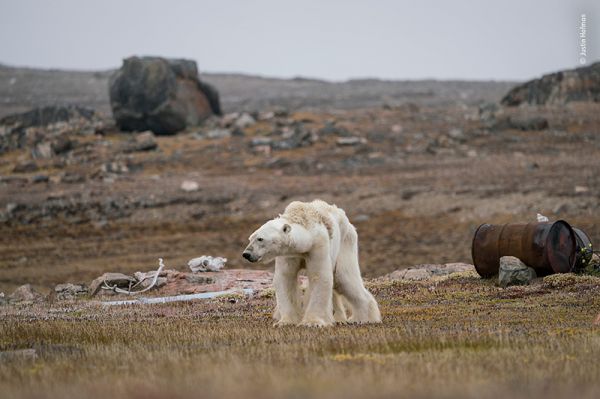 A Polar Bear’s Struggle by Justin Hofman, USA: Justin’s whole body pained as he watched this starving polar bear at an abandoned hunter's camp, in the Canadian Arctic, slowly heave itself up to standing. With little, and thinning, ice to move around on, the bear is unable to search for food. Sony a7R II + Sony FE 100-400mm f4.5-5.6 GM OSS lens; 1/200 sec at f10; ISO 800. 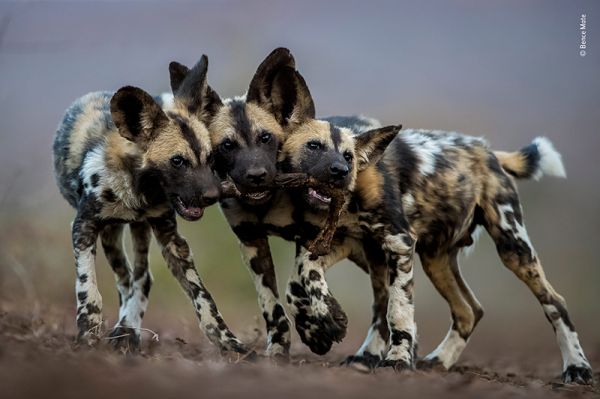 One Toy, Three Dogs by Bence Mate, Hungary: While adult African wild dogs are merciless killers, their pups are extremely cute and play all day long. Bence photographed these brothers in Mkuze, South Africa – they all wanted to play with the leg of an impala and were trying to drag it in three different directions! Canon EOS-1DX Mark II; 200-400mm lens (35mm equivalent: 197.2-394.3 mm); 1/1800 sec at f4.0; 4000 ISO. 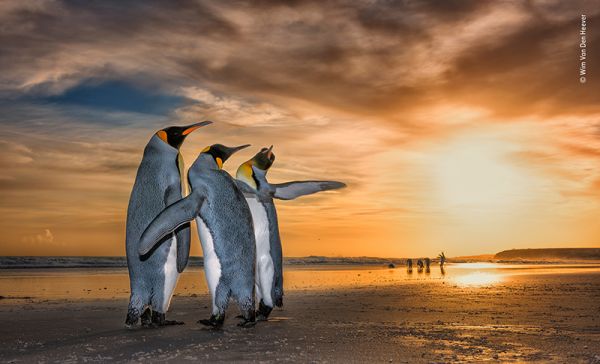 Three Kings by Wim Van Den Heever, South Africa: Wim came across these king penguins on a beach in the Falkland Islands just as the sun was rising. They were caught up in a fascinating mating behaviour – the two males were constantly moving around the female using their flippers to fend the other off. Nikon D810 + Nikon 24-70mm f2.8 lens at 40mm; 1/250sec at f11; Nikon SB910 flash.