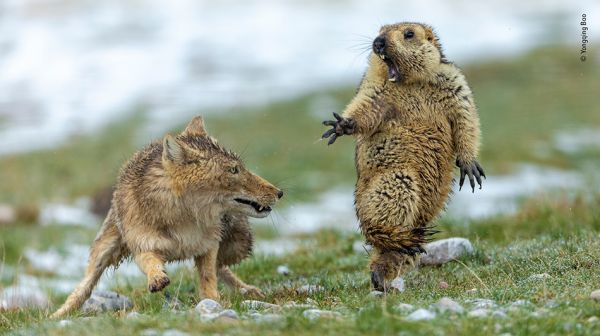 The Wildlife Photographer of the Year Competition announced the 2019 winning images at a ceremony at London’s Natural History Museum today. The Wildlife Photographer of the Year 2019 title went to Yongqing Bao from China for his fantastic image of a Tibetan fox chasing a marmot, which was shot on a chilly spring day in the Qilian Mountains National Nature Reserve on the Qinghai–Tibet Plateau.

The winner of the “Under Water” category was David Doubilet’s cornetfish following a wrasse through a mass of garden eels, photographed off Dauin in the Philippines. The title of Young Wildlife Photographer of the Year 2019 went to 14-year-old New Zealander Cruz Erdmann for his portrait of a bigfin reef squid, which was shot on a night dive in the Lembeh Strait off North Sulawesi, Indonesia. Finally, in the “Behaviour: Amphibians and Reptiles” category, Italy’s Manuel Plaickner took top honors for his picture of spawning frogs, captured in a large pond in South Tyrol, Italy.

Congratulations to all the winners! 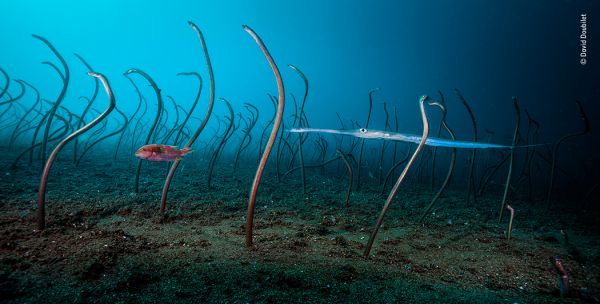 Winner 2019, Under Water: The garden of eels by David Doubilet, USA

The colony of garden eels was one of the largest David had ever seen, at least two thirds the size of a football field, stretching down a steep sandy slope off Dauin, in the Philippines—a cornerstone of the famous Coral Triangle. He rolled off the boat in the shallows and descended along the colony edge, deciding where to set up his kit. He had long awaited this chance, sketching out an ideal portrait of the colony back in his studio and designing an underwater remote system to realize his ambition. It was also a return to a much-loved subject—his first story of very many stories in National Geographic was also on garden eels. These warm-water relatives of conger eels are extremely shy, vanishing into their sandy burrows the moment they sense anything unfamiliar. David placed his camera housing (mounted on a base plate, with a ball head) just within the colony and hid behind the remnants of a shipwreck. From there he could trigger the system remotely via a 12-metre (40-foot) extension cord. It was several hours before the eels dared to rise again to feed on the plankton that drifted by in the current. He gradually perfected the set-up, each time leaving an object where the camera had been so as not to surprise the eels when it reappeared. Several days later—now familiar with the eels’ rhythms and the path of the light—he began to get images he liked. When a small wrasse led a slender cornetfish through the gently swaying forms, he had his shot. 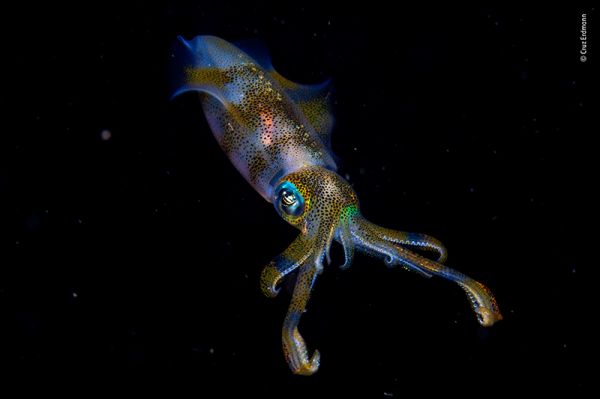 Cruz was on an organized night dive in the Lembeh Strait off North Sulawesi, Indonesia and, as an eager photographer and speedy swimmer, had been asked to hold back from the main group to allow slower swimmers a chance of photography. This was how he found himself over an unpromising sand flat, in just 3 metres (10 feet) of water. It was here that he encountered the pair of bigfin reef squid. They were engaged in courtship, involving a glowing, fast‑changing communication of lines, spots and stripes of varying shades and colours. One immediately jetted away, but the other—probably the male—hovered just long enough for Cruz to capture one instant of its glowing underwater show. 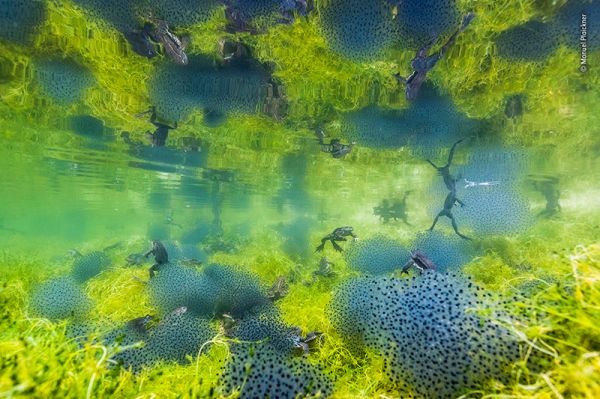 Every spring, for more than a decade, Manuel had followed the mass migration of common frogs in South Tyrol, Italy. Rising spring temperatures stir the frogs to emerge from the sheltered spots where they spent the winter (often under rocks or wood or even buried at the bottom of ponds). They need to breed and head straight for water, usually to where they themselves were spawned. Mating involves a male grasping his partner, piggyback, until she lays eggs—up to 2,000, each in a clear jelly capsule—which he then fertilizes. Manuel needed to find the perfect pond in the right light at just the right time. Though common frogs are widespread across Europe, numbers are thought to be declining and local populations threatened, mainly by habitat degradation (from pollution and drainage) and disease, and in some countries, from hunting. In South Tyrol there are relatively few ponds where massive numbers of frogs still congregate for spawning, and activity peaks after just a few days. Manuel immersed himself in one of the larger ponds, at the edge of woodland, where several hundred frogs had gathered in clear water. He watched the spawn build up until the moment arrived for the picture he had in mind—soft natural light, lingering frogs, harmonious colours and dreamy reflections. Within a few days the frogs had gone, and the maturing eggs had risen to the surface.

Caught in the moment: Gripping action shot wins Wildlife Photographer of the Year 2019

The winners of the Wildlife Photographer of the Year competition are revealed today at a ceremony at the Natural History Museum, London, which develops, produces and exhibits the international competition.

Hailing from the Chinese province of Qinghai, Yongqing Bao has won the prestigious Wildlife Photographer of the Year 2019 title for his extraordinary image, The Moment, which frames the standoff between a Tibetan fox and a marmot, seemingly frozen in life-or-death deliberations. A powerful frame of both humour and horror, it captures the drama and intensity of nature.

Chair of the judging panel, Roz Kidman Cox, says, ‘Photographically, it is quite simply the perfect moment. The expressive intensity of the postures holds you transfixed, and the thread of energy between the raised paws seems to hold the protagonists in perfect balance. Images from the Qinghai-Tibet Plateau are rare enough, but to have captured such a powerful interaction between a Tibetan fox and a marmot – two species key to the ecology of this high-grassland region – is extraordinary.’

Natural History Museum Director Sir Michael Dixon comments, ‘This compelling picture captures nature’s ultimate challenge – its battle for survival. The area in which this was taken, often referred to as the ‘third pole’, because of the enormous water reserves held by its ice fields, is under threat from dramatic temperature rises like those seen in the Arctic. At a time when precious habitats are facing increasing climate pressures, seeing these fleeting yet fascinating moments reminds us of what we need to protect.’

Fourteen-year-old Cruz Erdmann took the award for Young Wildlife Photographer of the Year 2019 with his serene portrait of an iridescent big fin reef squid captured on a night dive in the Lembeh Strait off North Sulawesi, Indonesia. From an early age Cruz has been in love with the ocean and gained his diving certification at the age of just ten years old. After inheriting his father’s old underwater camera, Cruz found the perfect medium to express his passion for all things aquatic.

Theo Bosboom, nature photographer and member of the judging panel for WPY55, says ‘To dive in the pitch dark, find this beautiful squid and to be able to photograph it so elegantly, to reveal its wonderful shapes and colours, takes so much skill. What a resounding achievement for such a young photographer.’

The two images were selected from 19 category winners, depicting the incredible diversity of life on our planet, from displays of rarely seen animal behaviour to hidden underwater worlds. Images from professional and amateur photographers are selected by a panel of industry-recognised professionals for their originality, creativity and technical excellence. The competition’s global platform sparks curiosity and wonder in millions of people each year allowing the unique emotive power of photography to sway hearts and minds and create advocates for the natural world.

Beating over 48,000 entries from 100 countries, Cruz and Yongqing’s images will be on show in stunning lightbox displays with 98 other spectacular photographs. The exhibition at the Natural History Museum opens on 18 October 2019 before touring across the UK and internationally to locations such as Canada, Spain, the USA, Australia and Germany.

Open to photographers of all ages and abilities, the next Wildlife Photographer of the Year competition opens for entries on Monday 21 October 2019. Find out more at http://www.nhm.ac.uk/visit/wpy/competition.html

* Prices including optional Gift Aid donation to the Museum.

The fifty-sixth Wildlife Photographer of the Year competition will open for entries on Monday 21 October 2019 and close at 11.30am GMT on Thursday 12 December 2019. Open to everyone, the competition welcomes entries from photographers of all ages and abilities: www.nhm.ac.uk/visit/wpy/competition.html

About Panasonic and LUMIX

Panasonic Corporation is a worldwide leader in the development of diverse electronics technologies and solutions for customers in the consumer electronics, housing, automotive, and B2B businesses. Celebrating its 100th anniversary in 2018, the company has expanded globally and now operates 591 subsidiaries and 88 associated companies worldwide, recording consolidated net sales of Euro 61.4 billion for the year ended March 31, 2018. Committed to pursuing new value through innovation across divisional lines, the company uses its technologies to create a better life and a better world for its customers. To learn more about Panasonic: www.panasonic.com/global

Since the first LUMIX digital single lens mirrorless camera, the LUMIX G1, was launched in 2008, Panasonic is the only manufacturer to have devoted 10 years to the development of this innovative camera system. Panasonic will continue to focus on developing high-end digital cameras that meet the stringent standards of professional photographers and video creators. To find out more about Panasonic's line-up of cutting-edge digital cameras: www.panasonic.co.uk/lumix