The Wildlife Photographer of the Year Competition announced the 2018 winning images at a gala dinner at London’s Natural History Museum this week. Michael Patrick O’Neill emerged as the winner in the Under Water category. His creative image of a flying fish was shot with a slow shutter speed, resulting in effective motion blur.

See the other winning underwater images from the contest below. 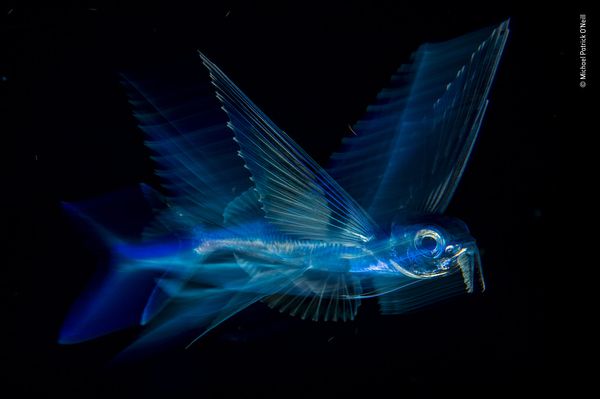 On a night dive over deep water – in the Atlantic, far off Florida’s Palm Beach – Michael achieved a long-held goal, to photograph a flying fish so as to convey the speed, motion and beauty of this ‘fantastic creature’. By day, these fish are almost impossible to approach. Living at the surface, they are potential prey for a great many animals, including tuna, marlin and mackerel. But they have the ability to sprint away from danger, rapidly beating their unevenly forked tails (the lower lobe is longer than the upper one) to build enough speed to soar up and out of the water. Spreading their long, pointed pectoral fins like wings, flying fish can glide for several hundred metres (more than 650 feet). At night, they are more approachable, moving slowly as they feed on planktonic animals close to the surface. In a calm ocean, Michael was able to get closer and closer to this individual, which became relaxed in his presence. In the pitch black, he tried various camera and light settings, all the while keeping track of both his subject – a mere 13 centimetres (5 inches) long – and his dive boat. The result is his ‘innerspace’ vision of a flying fish. 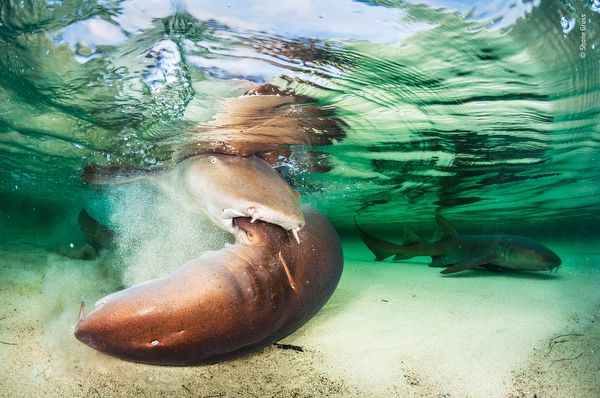 Highly commended 2018, Under Water: Shark sex in the shallows by Shane Gross, Canada

Shane woke at dawn to the sound of splashing. Scrambling to look out of his tent, he saw ‘a pile of 14 nurse sharks thrashing around in knee-deep water’. He knew that, in summer, when sunrise coincided with high tide, nurse sharks came to this bay on The Bahamas island of Eleuthera to mate. So the previous evening, when he had seen them heading for the shallows, he had camped out on the beach. Nurse shark mating is no gentle affair. The male bites the female’s pectoral fin, rolling her over and pinning her to the seabed. Many males may attempt to mate with a single female – who tries to avoid them by swimming into shallow water and burying her pectoral fins in the sand. Shane managed to get in close to the action, catching the tiny eyes of the mating pair, while avoiding getting in the way of the other sharks. 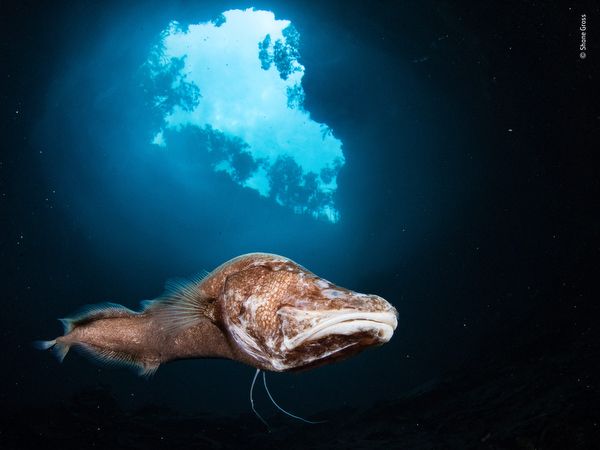 Highly commended 2018, Under Water: Beneath the blue by Shane Gross, Canada

In the cold, clear depths of Eleuthera’s Sapphire Blue Hole cavern floats a Bahama cavefish. About 18 centimetres (7 inches) long and almost blind, it hugs the side to avoid the light and slowly snakes along. Shane had looked for it many times – a species found only in The Bahamas, in a dozen or so inland sinkholes that have been carved by water from limestone and connect below ground to the sea. The fish moves between surface fresh water and salt water deeper down, feeding on invertebrates such as shrimps, and is very sensitive to changes in water quality. This pool was tricky to reach, being encircled by a 6-metre (20‑foot) cliff. ‘I lowered my camera and diving gear by rope,’ says Shane. ‘Then, I jumped.’ At last, he found a fish that was not too shy. A sense of place was created by picturing it beneath the tree-framed interface, with the sunlit world above. 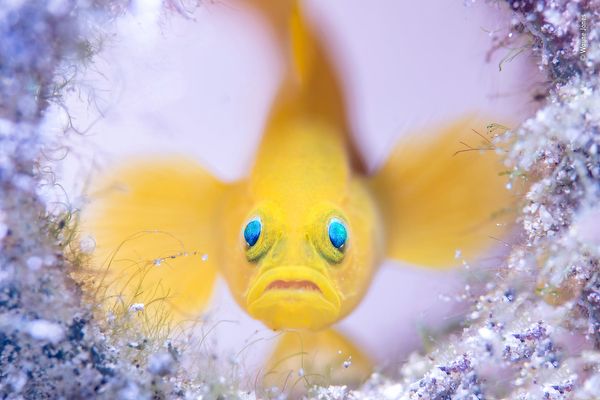 On the sandy seabed off the coast of Mabini in the Philippines, a yellow pygmy goby guards its home – a discarded glass bottle. It is one of a pair, each no more than 4 centimetres (1 and a half inches) long, that have chosen a bottle as a perfect temporary home. The female will lay several batches of eggs, while the male performs guard duty at the entrance. Setting up his camera a few centimetres in front of the bottle’s narrow opening, Wayne positioned his two strobes – one at the base of the bottle to illuminate the interior, and the other at the front to light the goby’s characteristic surprised face. Opting for a shallow depth of field, Wayne focused on the goby’s bulging blue eyes, allowing the movement of the fish to blur the rest of its features into a haze of yellow, and framing its portrait with the circular entrance to the bottle. 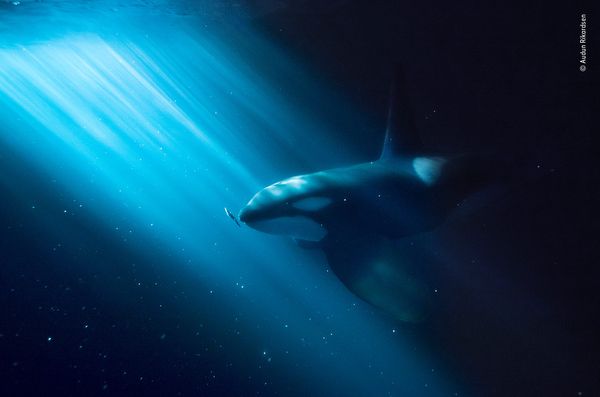 Audun had long awaited the chance to document how killer whales continue to feed in the dark, and in Kaldfjord, outside Tromsø, in northern Norway, the elements finally came together. It was polar night, with just a few hours of dim light spilling over the horizon around midday. Large numbers of herring were overwintering in the fjords, attracting whales and fishing boats. The boats usually fished in darkness, and the killer whales knew that the sound of nets being hauled up meant the possibility of an easy meal. ‘When a crew finished fishing and retrieved their net,’ explains Audun, ‘I could see the killer whales still feeding on herring drifting around the boat.’ At his request, the fishermen angled their strongest light into the water. Despite the harsh cold and inky ocean, Audun was finally able to get his shot of a killer whale, hunting the last few fish in the dark, transiently lit by the boat’s beam. 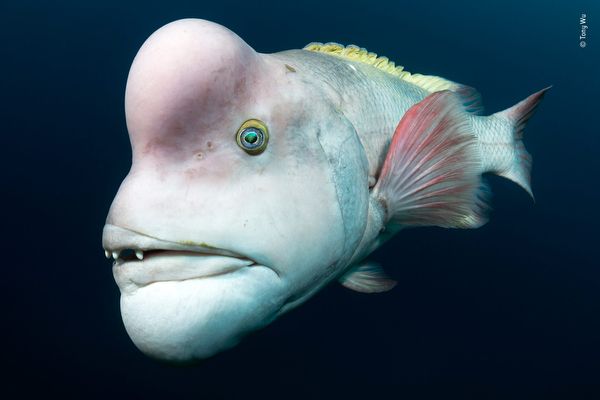 Accentuating his mature appearance with pastel colours, protruding lips and an outstanding pink forehead, this Asian sheepshead wrasse sets out to impress females and see off rivals, which he will head-butt and bite. Tony has long been fascinated by the species’ looks and life history. Individuals start out as females, and when they reach a certain age and size up to a metre (more than 3 feet) long can transform into males. Long-lived and slow-growing, the species is intrinsically vulnerable to overfishing. It favours rocky reefs in cool waters in the Western Pacific, where it feeds on shellfish and crustaceans, though little more is known about it. In a window of calm, amid high seas, Tony reached Japan’s remote Sado Island, to reveal some of the drama of the wrasses’ lives. Here, he conveys the suitor’s earnest intentions, written large on his face.