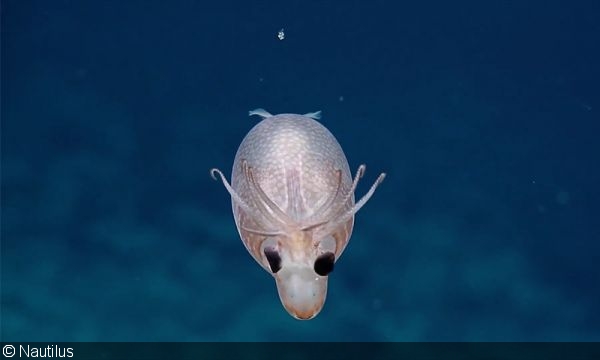 Scientists aboard research ship E/V Nautilus have posted another fascinating video of one of the denizens of the deep that it routinely films during its exploratory missions in the remote central Pacific.

“What are you?” enquires one of the researchers, as the small, bulbous creature comes into view. “Is that a squid? I think it’s a squid. It’s like a bloated squid with tiny tentacles and a little hat that’s waving around. And it looks like it’s got a massive, inflated mantle cavity. I’ve never seen anything quite like this before.”

The creature they found, which was spotted using a remotely operated vehicle (ROV) at a depth of 4,544 feet (1,385 meters) near Palmyra Atoll, is known as a piglet squid (Helicocranchia sp.) because of its large siphon that looks like a snout. Squids use the siphon to move around by pushing and pulling the surrounding water like a jet pump. They are able to regulate buoyancy with an ammonia-filled internal chamber. This cute cephalopod is typically observed with its tentacles flared above its head like reindeer antlers. (In terms of cuteness factor, it doesn’t quite compete with the awesome “googly-eyed squid” spotted by the team a few years ago.)

Norma Hayes wrote:
Keep it up!

Thomas Maloney wrote:
I didn't know such a creature exists until now. How interesting it truly is to know that we are living amidst other beautiful living things of Mother Nature that we might never come across if not for avid photographers like yourself. Thanks for sharing!
You must be logged in to comment.
Support Our Sponsors
Advertise With Us
Newsletter
Travel with us