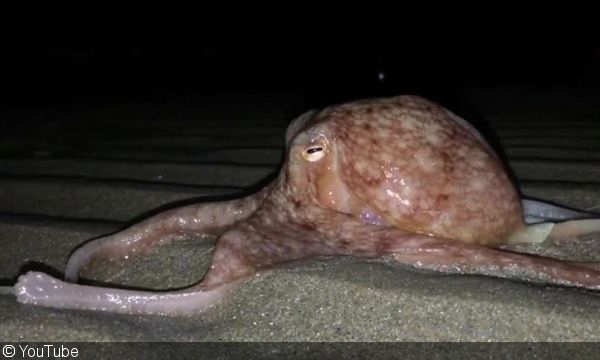 In a scene straight out of a Halloween horror flick, dozens of octopuses were spotted emerging from the ocean and crawling up a Welsh beach. The spooky sight occurred three nights in a row at New Quay Beach in Ceredigion in west Wales.

Footage of the bizarre phenomenon was captured by SeaMôr, which runs dolphin-watching boat trips. Brett Jones from SeaMôr first saw the odd behavior when he was coming back from an evening trip. “It was a bit like an End Of Days scenario,” he told the BBC. “There were probably about 20 or 25 on the beach. I have never seen them out of the water like that.”

Jones tried to return the wandering cephalopods back to the sea, but some couldn’t be saved and were later found washed up along the shore. “We collected the ones that were totally out of the water and plopped them back in at the end of the pier,” Jones said, “hopefully saving them from getting stranded.”

Both locals and scientists are speculating what possible reasons there could be for the octopuses’ behavior. One suggestion is that recent storms could be the cause; another is that the animals were undergoing senescence—the “end of life” stage characterized by aimless wandering around and diminished feeding.

Read more here, and watch the video footage below.