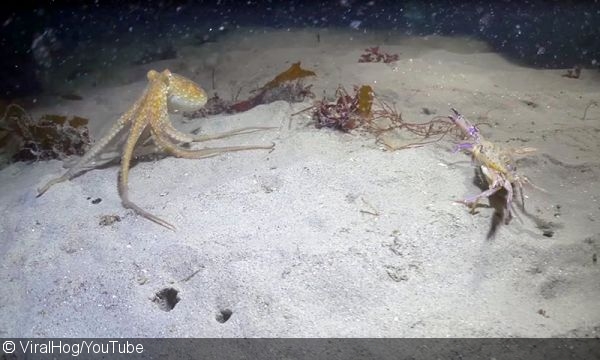 When two divers stumble across a duel between a red octopus and a swimmer crab in the waters of Monterey Bay, California, it looks like the latter’s days—or rather minutes—are numbered. Relentlessly pursued by the cephalopod, the plucky crustacean tries every evasive maneuver it can muster, but it seems like it’s only a matter of time before the octopus finishes the job. But you’ll never guess what happens next…

Ok, we just can’t spoil it for you! Just watch and then scroll down:

Yup, that octo might be smart, but we bet he didn’t see that coming—that little crustacean has a guardian angel in the shape of a seal!

Well, as it turns out, it isn’t the first time, according to filmmakers Connor Gallagher and Patrick Webster, that “Whiskers” the seal has performed that particular trick. The crafty mammal has worked out that following divers’ lights is a handy way to snag an easy snack. “We’ll see [Whiskers] start to stalk an individual slowly and all of the sudden the chase is on, and he’ll pop out of a crack with a rockfish or halfmoon in his mouth,” Gallagher told National Geographic.

The crab should consider himself lucky though: Whiskers could just as easily have gobbled him down. As well as octopus, squid and fish, harbor seals are quite partial to a tasty crustacean.