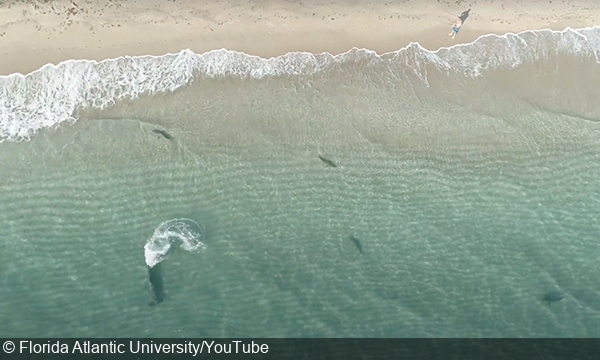 Researchers at Florida Atlantic University (FAU) have released drone footage showing for the first time that adult blacktip sharks use shallow water to avoid predation. In the video, you can clearly see how adult blacktips (Carcharhinus limbatus) swim to the shallower water when chased by a great hammerhead (Sphyrna mokarran). While shallow water nursery sites are known refuges for juvenile sharks of various species, there was no evidence showing that large adult sharks also head to shallower waters to evade predators before this FAU study.

Hammerheads are commonly found in relatively shallow waters, and are known to prey on other sharks, so blacktip aggregations near the shore are fair game. The researchers, who recorded the footage in the shallow coastal waters of Palm Beach County, estimated that the blacktips averaged around six feet long, and using this to calibrate the scale in the video, concluded that the interactions took place no more than 150 feet from the shore—in water less than waist deep. The hammerheads are roughly double the size of the blacktips.

It should be noted that some of the footage analyzed in the study was provided by a local citizen scientist and filmmaker, Joshua Jorgensen. Nice one, Joshua!