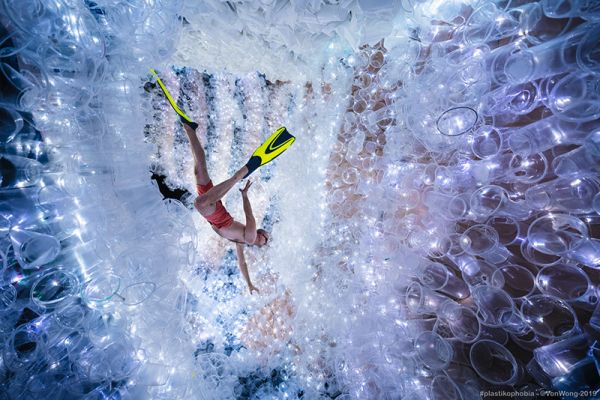 After creating quite a stir in Vietnam with his last installation about the “Strawpocalypse,” conceptual photographer Benjamin Von Wong is in Singapore, with co-creator and fellow Canadian Laura François, aiming to scare people into using fewer plastic cups. The work, aptly entitled “Plastikophobia,” was created using some 18,000 discarded single-use plastic cups collected from hawker centers across the country over two days.

The creation of the experiential installation, which is on display at the Sustainable Singapore Gallery at Marina Barrage from March 7 until April 18, involved an army of volunteers, who spent over two 14-hour days cleaning the cups before construction of the piece could begin. The end result is what Von Wong calls on his blog “a shiny crystal cave,” which he hopes will lure “unsuspecting passersby with the promise of a pretty selfie, only to to be overcome by a feeling of Plastikophobia – an extreme aversion to single-use plastics.”

François, an expert in sustainable design and social impact strategy, tells Eco-Business that 18,000 cups, is “an extremely conservative estimate” of the amount of plastic waste produced daily by the 22 hawker centers they visited. If you consider that the country has 144 hawker centers open every day, that’s a terrifying 21.5 million cups per year—a very scary statistic indeed.

Singapore generates 800 million kilograms of plastic waste annually and 94% of it is incinerated in four waste-to-energy plants, with another plant going into operation soon. “A material like plastic requires a lot of energy to be created,” says François. “Even if plastic is burned to produce energy, burning it discounts its potential to be reused and made into something else. Incineration is a very oversimplified solution to plastic waste.”

Still, things may be changing in Singapore. The country’s parliament has just unveiled the Resource Sustainability Bill, which aims to help companies reduce the amount of resources they use. The city-state’s Ministry of the Environment and Water Resources has designated 2019 as the Year Towards Zero Waste, and a masterplan to tackle the country’s waste crisis has been promised for later in the year. 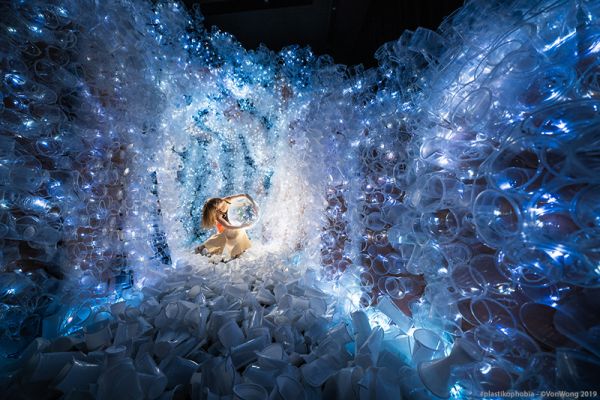