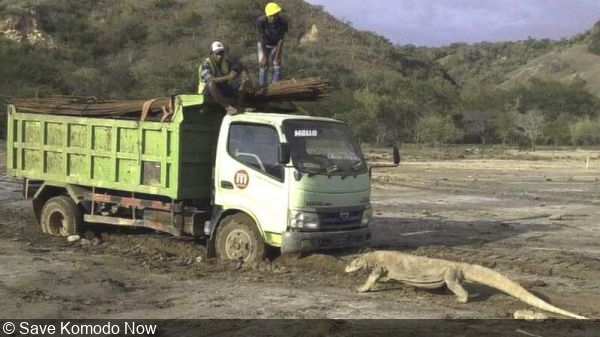 A viral image shared by conservation collective Save Komodo Now has sparked worries that a “Jurassic Park”-style attraction is under construction on the Indonesian island of Rinca, one of the three large islands—along with Komodo Island—encompassed by Komodo National Park. The picture (above) shows a Komodo dragon facing a construction vehicle.

Before the coronavirus pandemic hit, Komodo Island’s popularity had raised fears about the impacts of mass tourism, and last year, authorities were considering a plan to close it entirely and expel the local people who share the island with the giant lizards, 1,700 of which live there. That idea was ultimately shelved and officials have instead promised to curb tourist numbers by charging a $1,000 membership fee to visit Komodo Island.

Meanwhile, however, a mass tourist development on neighbouring Rinca Island, home to around 1,000 Komodo dragons, has been unveiled. The project’s architects posted a video on social media—complete with the soundtrack from Jurassic Park—that has been widely shared by activists. “This kind of massive development disturbs the interaction of the animals,” Greg Afioma, a member of the Save Komodo Now collective, told the BBC. “It will change their habitat.”

The government has defended the development, maintaining that construction work will not harm the unique reptiles. Wiratno, Director-General of Nature Conservation and Ecosystems at the Indonesian Ministry of Environment and Forestry, said: “No Komodo dragons will become victims.”

The development is scheduled for completion by June 2021.