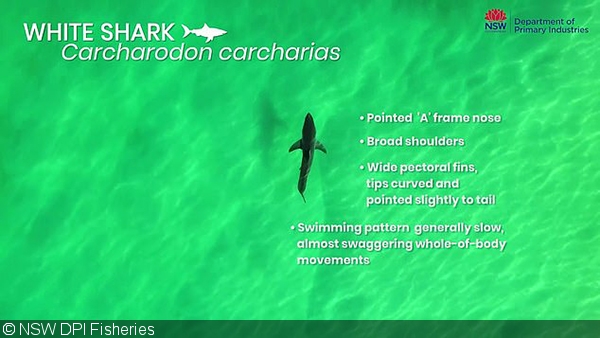 A video released by Australia’s New South Wales Department of Primary Industries (DPI) Fisheries shows how drones can be used to identify and differentiate various types of sharks by looking at swimming patterns and analyzing body parts like nose shape, dorsal and pectoral fins, and tail.

The video shows the great white’s generally slow “almost swaggering whole-of-body” movement, pointed “A” frame nose, broad shoulders and wide pectoral fins with curved tips that point slightly to the tail. By comparison, the bull shark’s movement is very straight, and it has a large, rounded head, with its pectoral fins in line with the dorsal fin. On the other hand, the tiger shark’s swimming pattern shows a subtle, rear-focused sway, and its small, curved pectoral fins and long, narrow tail can be clearly seen.

The video was designed by DPI scientists to help drone pilots identify sharks from the air as part of the “next stage in the evolution of shark surveillance and lifesaving technology.” NSW DPI is working with the NSW Surf Life Saving body and local clubs to operationalise drones in a “world first trial” in the Australian state. The effort aims to avoid sharks such as great white, bull and tiger sharks from coming into contact with swimmers.