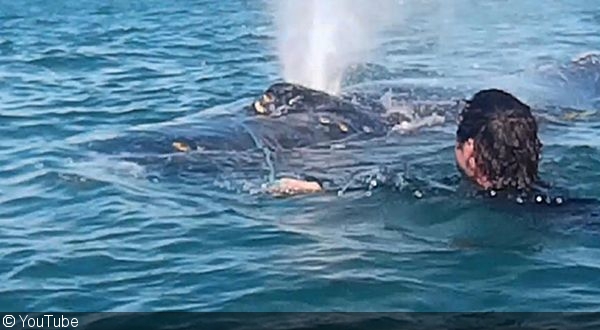 A tour operator leading a group of kayakers near Queensland, Australia jumped into the water to help free the scared whale from a long rope. The leader, 36-year-old Tyron van Santen, believed that the whale was in serious distress, as its fin remained disabled with the rope in place.

“We get some close encounters with whales usually they come up and check us out and move on but this one sort of sat there,” van Santen told AdelaideNow.com. “It turned on its side and it was kind of like it was trying to show us something.”

The diverse group of international tourists captured the entire affair from numerous angles. It was the first time in five years of running the whale and dolphin tours that van Santen actually touched one of the animals.

“I’ve got so much respect for them too because I know how powerful they are,” he says. “I wouldn’t jump in with any whale but I just felt like this one needed help.”