Given the vast amount of gear available these days, it can be a daunting task to keep track of the latest housings, DSLRs, compacts, video cameras, EVIL cameras, strobes, video lights, accessories and any other equipment that is available in today’s market.

Together with our retail partner, Backscatter, we have created  a “Buyers Guide” for the Fall, with our recommendations of “what’s hot” to help you with your next purchase.

If you find this article useful, please help support DPG and articles like this one by purchasing your equipment through Backscatter, our official retail partner.

With a large 10.4MP sensor and full manual controls, Canon’s G12 compact is still the leader in the market for demanding looking to minimize space. The Fisheye FIX is the smallest and most robust housing available for the G12. The palm size housing weighs a mere 1.78 lbs., is ergonomically engineered from aluminum, allows access to all camera controls, and is depth rated to 330 feet. 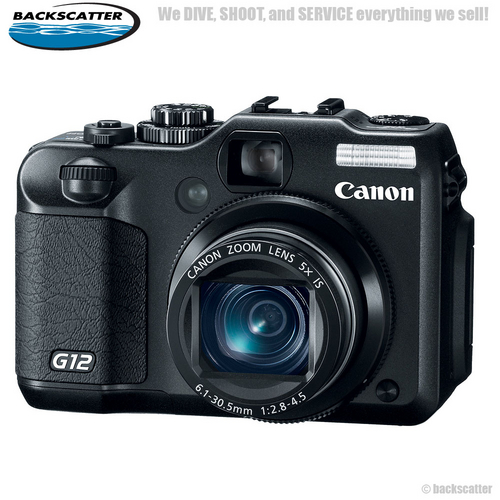 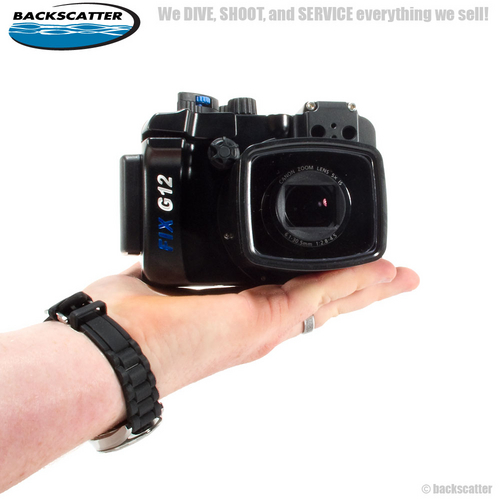 Interchangeable lens, mirrorless cameras continue to grow in popularity. Among the most popular models of this growing genre is the Olympus PEN E-PL3, the latest release in Olympus’ PEN series.  The camera features a 12.3MP four-thirds sensor, sturdy construction and a simple control dial system.  The Pen 3 saw some major upgrades from the PEN 2, including a new modern menu system, full HD video capture and, importantly for underwater photographers, a faster autofocus system. 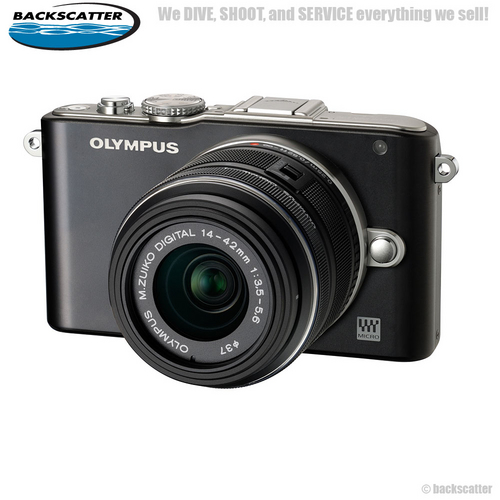 Olympus makes their own housing for the E-PL3, the PT-EP05L, which is customized especially for the PEN 3.  A major benefit of the owning the PT-EP05L is the availability of custom ports made by specialty port maker Zen Underwater.  The Olympus housing itself only comes with a fixed port, so the Zen dome port for the 9-18mm wide-angle lens and a flat port for the 45mm macro lens are recommended. There are some In addition, the latest PEN housing includes a “Target Light,” designed for macro photographers looking to focus on subjects in poor lighting. The housing and camera body retail for $1500 and the ports range from $399 for the flat macro to $499 for the wide-angle dome. 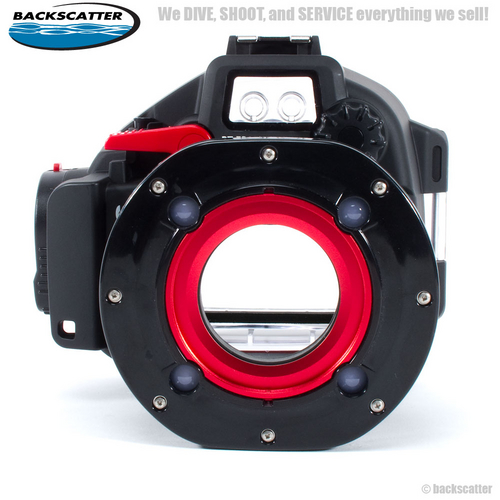 Sony’s NEX-5N camera is the most compact Electronic Viewfinder Interchangeable Lens (EVIL) camera on the market. DPG recently reviewed it’s predecessor, the NEX-5,   and were impressed its small size but powerful performance, and the NEX-5N appears to be a substantial improvement.  The camera squeezes in a 23.5 X 15.6mm, 16.1MP APS HD CMOS senor,, very similar to the one found in a Nikon D7000 SLR, into a body that weighs only 0.59 lbs and costs $699.  It’s low light capabilities are being touted as being as good, if not better than some of the APS-C sensors in SLRs. 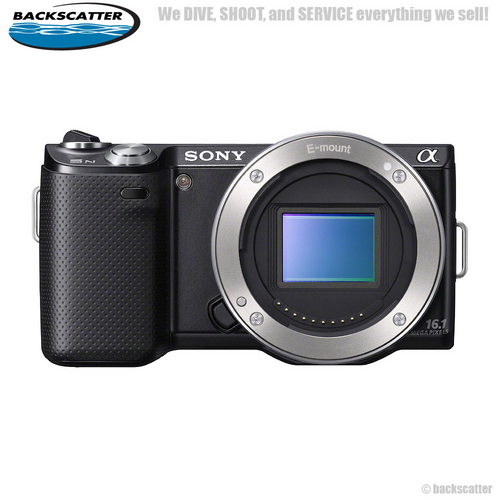 Unlike Olympus, Sony doesn’t make a proprietary housing for the NEX-5N, so one most look to the third party housing manufacturers.  Nauticam’s housing, the NEX-5N, is designed to compliment the camera’s duality of size and performance. The sleek aluminum housing keeps weight and bulk to a minimum, without compromising the ability to control every manual function and change ports and lenses. The housing is depth rated to 300ft and retails for $1,650.

The Nikon D7000 helped redefine the mid-class DSLR when it was released last fall with a 16MP sensor and 1080p HD video. Despite being released over a year ago, it is still the best cropped sensor SLR available for Nikon users. 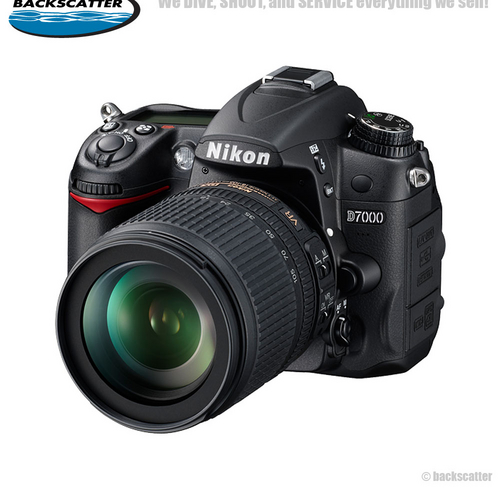 The Nauticam NA-D7000 housing includes several new company features of its own, like a new locking latch, lens release lever and flash activation button. The NA- D7000 also features improved rear dial control and a two stage shutter release so that the photographer has a better feel of half pressing the shutter.  The housing works with all Nauticam’s ports, and also fits a number of port adaptors for using other brand’s ports. It retails for $3,200. 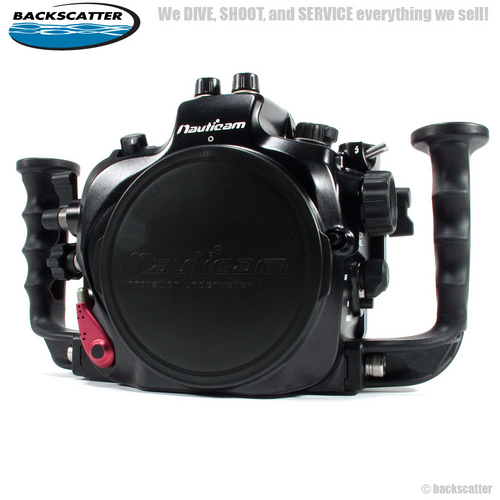 The Canon faithful must also look too an older model, the EOS 7D, when in the market for the best cropped sensor SLR .  The camera redefined Canon’s SLR lineup with A 18MP APS-C CMOS sensor and revolutionized how video was shot, with its 1080p HD. 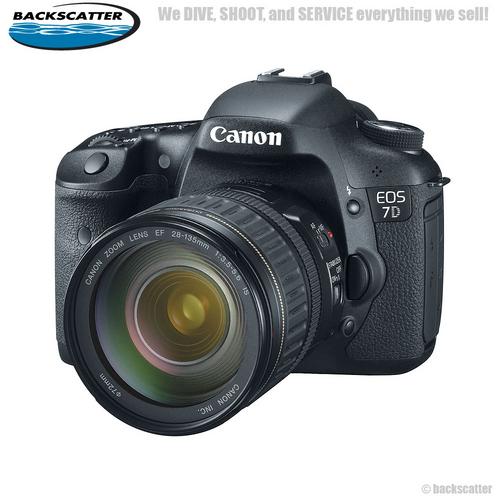 Aquatica’s housing for the Canon 7D, the Aquatica A7D, is precision machined from an aluminum bock, is depth rated to 300 feet, and, importantly, provides access to all essential controls within easy reach.

The A7D offered new features not before seen in Aquatica housings, including a 20-degree angle and extended buttons for easy use, deepened groves in knobs for better rotation control and fingertip access to all video controls. The Aquatica 7D retails for a modest $2,940. 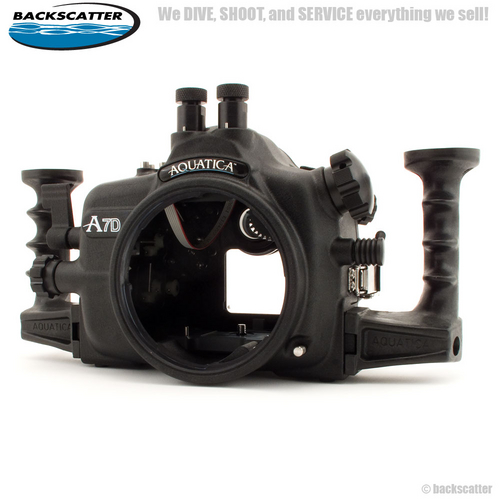 The Sola series of video lights, starting with the Sola 600, has quickly become the most popular video lights in the industry, and the lineup has diversified since 2010, when the 600 was released.  The newest and the company’s most powerful model , the Sola 1200 is a 1200 lumen flood light and amazingly small weight of 265g. It also has an option for 500 lumen spot light for macro work. What has captured the attention of many videographers is the Sola series small size,  and the 1200 is roughly 1/3 the weight of the Light and Motions older Sunray series of light, which had a similar output. The 1200’s battery is built factory sealed and charges externally. The retail for a relatively inexpensive $700, so adding two is easier on the wallet. 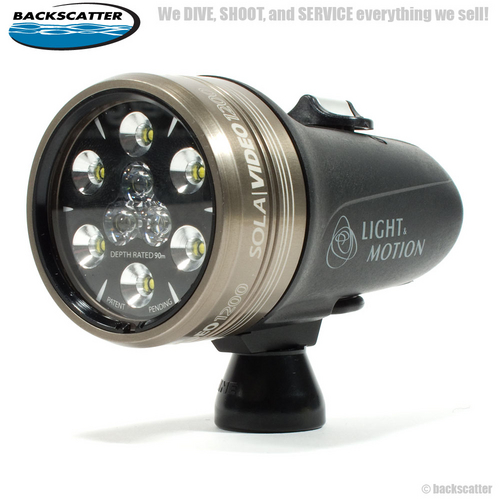 Gates VL-24 Pro Video Light: For enthusiastic armatures or professionals looking for the latest in high powered video lights,  the Gates’ VL24 has recently hit the market with it’s 6000 Lumen ouput. The pro quality VL24s were designed in cooperation by Gates and Subaqua Imaging Systems, and are suitable for serious DSLR video users or professional/cinema quality systems. The VL24 retails for just over $1200 per light and is depth rated to 450 feet. The powerful lights burn for two hours at half power and an hour at their full 6000 lumens. Just don’t look directly at it! 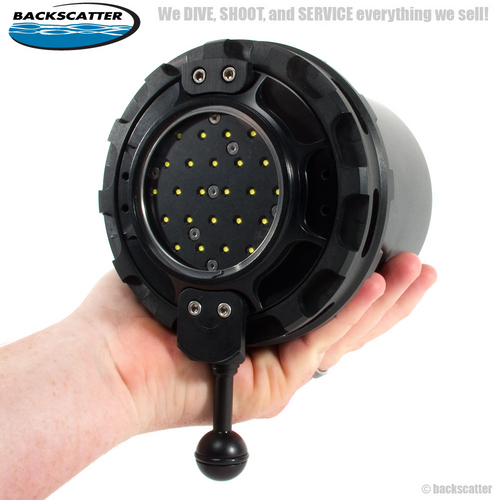 The GoPro has stormed onto the scene with it’s rugged construction, small size, simple controls and ability to shoot HD quality video. For underwater photographers who have long wished for a way to shoot video without investing the time in learning the new medium or putting money into the new system, the GoPro has been a godsend. It weighs a mere 3.3oz but can shoot 1080p HD video at 30fps.  While the GoPro comes with an underwater housing it unfortunately does not include a port suitable for getting sharp focus underwater. Our retail partner,  Backscatter,  has stepped up to the plate and solved this problem, producing a custom housing with a port suitable for underwater videography, and a red filter for only $99. 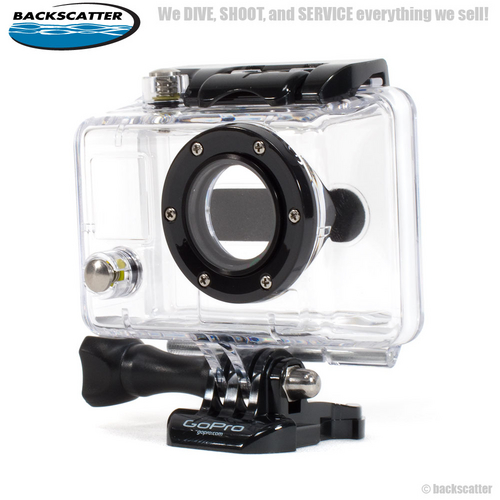 Ever wanted to add a little boost to your dives, but couldn’t hold onto a scooter and your camera? The Pegasus Thruster Pro Scooter delivers 35 pounds of thrust, propelling the diver forward at 170 feet per minute, all the while attached to a tank – leaving your hands free for photo or video equipment.  At just 13 pounds –negative five pounds in water- the Thruster is ideal for videographers looking to add motion to their videos without adding more weight. 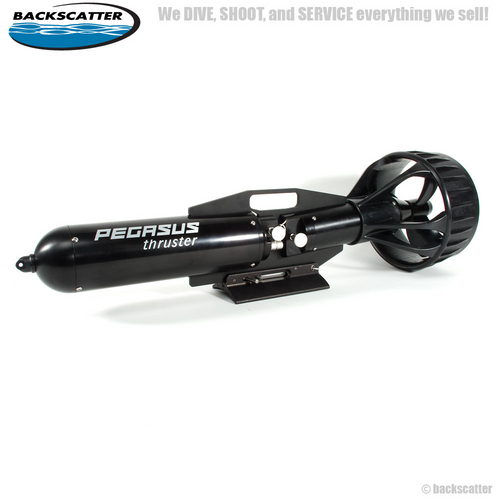