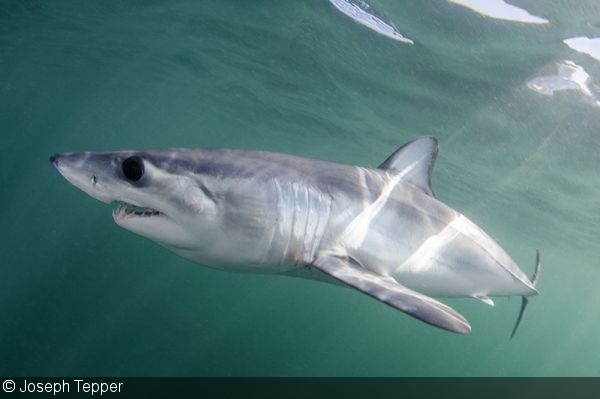 As anyone who’s ever tried to photograph a mako knows, these toothy predators are the planet’s fastest sharks, clocking speeds of up to 70 or 80 miles per hour. New research shows that the shark’s skin features areas of flexible, scale-like denticles that allow the shark to move more efficiently through water.

“The mako has translucent denticles about 0.2 millimetres in size,” says University of Alabama aeronautical engineer Amy Lang, who tested mako shark skin samples in water tunnel experiments. “These sit like little loose teeth. If water flow begins to reverse, the scales pop up.” If the flow reverses near the skin, this leads to something called flow separation.

Any time a flow separates, you get this kind of drag, even on a smooth body like a golf ball. “The dimples on a golf ball are an example of separation control that reduces pressure drag by maintaining attached flow around the ball and reducing the size of the wake. You can hit a golf ball with dimples 30 percent farther than if the same ball were smooth,” Lang says.

In the case of the mako, Lang and her colleagues found that flow separation was being similarly controlled by the shark’s loose denticles. “It’s entirely passive, and happens in about 0.2 milliseconds,” she says. Interestingly, the most flexible scales are situated in areas where the most flow separation occurs—the flank behind the gills as well as the trailing edges of the pectoral fins.

The work is funded in part by Boeing and the U.S. Army, who are interested in applications to helicopter blades and the wings of fighter jets. 3D-printed models of the mako denticles have already been produced by the researchers. Says Lang: “We’re definitely moving forward to being able to replicate it.”