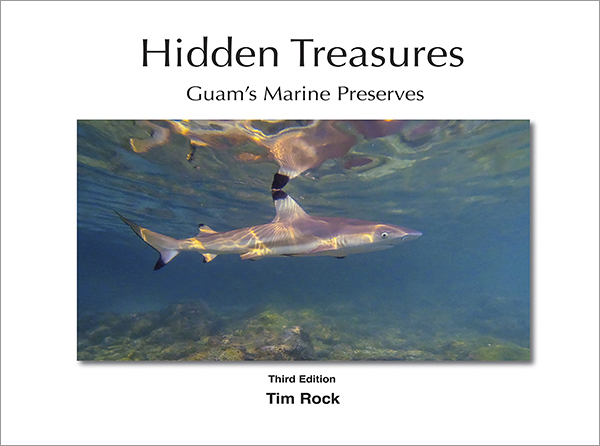 Along with 2019 versions of his diving and snorkeling guide books, Guam-based author and underwater photographer Tim Rock has released a third edition of his book, Hidden Treasures, Guam’s Marine Preserves. The full-color book now contains more than 440 images, including photos of the Micronesian territory’s impressive marine wildlife and wrecks.

Soft cover versions are available in Tim’s Blurb bookstore, while electronic versions can be downloaded from Amazon and iTunes.

The small but scenic island of Guam in Western Micronesia is blessed with one of the world’s richest coral reef marine environments. It thrives with more than 1000 fish species and over 400+ kinds of hard and soft corals, 1,600 mollusk species and a dozen different marine mammals.

The betterment of Guam’s diverse underwater world has been the thrust behind a series of nature preserves set up around the island in the last decade. What these areas do is allow breeding stocks to prosper to make more fish and allow corals to grow without stress. In a far-sighted move, the island was studied and some small but very important areas were set aside to help replenish the reefs. They encompass small reef areas and bays from north to south. They are starting to ensure a resurgence of reef health on this diverse western Pacific gem.

This Third Edition is a visual record of the Guam marine preserves by Lonely Planet author and Getty Lonely Planet Images photojournalist Tim Rock, who is a Guam resident. The preserves are now at an important stage in their young development. Enjoy this trip through the preserves. The book also features parks, conservation and historical sites and popular underwater venues found on tropical Guam. Available in Apple e-book format, Kindle and soft cover.

Lonely Planet author and photojournalist Tim Rock pioneered diving and snorkeling guides and magazine articles for the islands in Micronesia and Indonesia. He has been based in Guam for over three decades and was recently awarded the Lifetime Achievement by the University of Nebraska at Omaha School of Communications. His work has appeared in National Geographic, Lonely Planet Publications, Terre Sauvage, GEO and numerous publications worldwide. His work on the Guam Marine Preserves is groundbreaking, bringing awareness of the need for these special bays and the good they promote to people all over the Pacific.

See them on Amazon at Tim’s author page.

Lou Emilie wrote:
I'm gonna ask this book for my brithday :)
You must be logged in to comment.
Support Our Sponsors
Advertise With Us
Newsletter
Travel with us