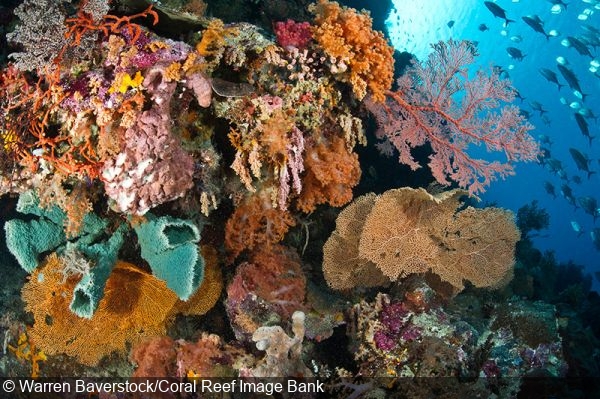 Rich biodiversity is key for coral health, as evidenced here at the Cornucopia dive site at Wakatobi

A new study published in Nature Ecology & Evolution has shown how important fish biodiversity is for the health of coral reefs. According to the authors, this is true both for unspoiled reefs and those that have been subjected to stresses such as elevated sea temperatures. Significantly, however, the study shows that despite the clear link between biodiversity and coral health, human-induced pressures still degrade reef ecosystems in different ways.

The research team conducted surveys on pristine reefs around 10 islands in the Chagos Archipelago, a remote coral reef area in the Indian Ocean that is both uninhabited and unfished. The surveys measured biodiversity by counting the number of different fish species on the reef, and how well ecosystems were functioning by determining the biomass of fish living on the reef and the rate at which biomass is produced.

“We were surprised that the positive effects of biodiversity on ecosystem functions were so strong because such clear patterns are rare in ecological data,” said the study’s lead author Dr Casey Benkwitt. “These results match previous studies on less pristine coral reefs, and in other terrestrial and marine systems. To see the same patterns in so many places suggests the positive relationship between diversity and ecosystem function may be one of the few general rules in ecology.”

The scientists also considered reefs degraded by human-induced pressures, looking at data from before and after the mass coral bleaching event of 2016. The loss of coral resulted in a decline in biodiversity of 17%, and this in turn impacted the reefs’ ability to function owing to the strong link between biodiversity and coral health. “While biodiversity is clearly important to ecosystem function,” said Dr Benkwitt, “biodiversity conservation may become more difficult and may not fully sustain ecosystems unless underlying stressors, such as climate change, are reduced.”