Study: Playing the Sound of a Healthy Reef Could Help Save Corals
By Ian Bongso-Seldrup, December 1, 2019 @ 09:00 AM (EST)
Source: The Guardian 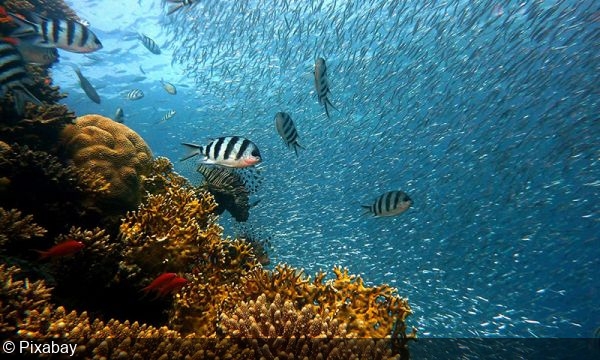 Researchers have discovered that pumping out the sounds of healthy corals through underwater loudspeakers attracts fish back to abandoned and degraded reefs. The study, which is published in Nature Communications, found that “snapping shrimp” and fish noises “ranging from grunts to hums, buzzes and whoops” produced an influx of fish from every level of the food chain.

Past research has demonstrated that degraded reefs don’t sound, or smell, as attractive to young fish. “[We thought] if one of the things that a degraded reef is missing is its sounds, well, that is something that on a local level we can replace,” Tim Gordon, the study’s first author from the University of Exeter, told the Guardian, “and if we do we might pull in some fish and we might kickstart a recovery a little quicker.”

The team found that playing healthy reef sounds led to a doubling of the number of fish arriving onto experimental patches of reef habitat. It also had the effect of increasing the number of species present by 50 per cent. The scientists conducted their experiments across patches of dead coral along the Great Barrier Reef, which has been severely impacted by prolonged bleaching events in recent years.

“Acoustic enrichment is a promising technique for management on a local basis,” said Professor Andy Radford, a co-author from the University of Bristol. “If combined with habitat restoration and other conservation measures, rebuilding fish communities in this manner might accelerate ecosystem recovery. However, we still need to tackle a host of other threats including climate change, overfishing and water pollution in order to protect these fragile ecosystems.”