Sony is advancing the digital SLR category for mainstream photographers with today’s introduction of the new α (alpha) DSLR-A200 camera.

The DSLR-A200 model features upgrades influenced by the recently-introduced, enthusiast-class DSLR-A700 camera and replaces the former Sony DSLR-A100 model, which was Sony’s first in the DSLR class.

Faster, Lighter, and Easier to Use 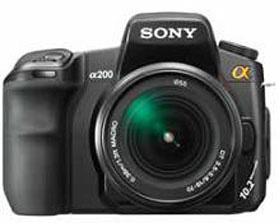 The new model is designed to be faster, lighter and easier to use. Upgraded features include a wider, 2.7-inch Clear Photo LCD(TM) screen for easy playback viewing; a more compact body and an easily-accessible mode dial; an easy-to-use function menu (camera function display); improved noise control for higher quality images; an auto focus speed 1.7x faster than the previous model; improved predictive control performance; quieter shutter sound; automatic pop-up flash; and a battery life indicator that displays the percentage of battery life remaining so you know exactly when to recharge.

As seen in all α (alpha) camera bodies, the DSLR-A200 camera incorporates Super SteadyShot® image stabilization in the body to allow shooting at shutter speeds of 2.5 to 3.5 steps slower than otherwise possible – a benefit realized with every compatible lens attached to the camera. Compatible lenses encompass all Minolta Maxxum® mount lenses, in addition to Sony a (alpha) lens lineup - including Carl Zeiss® lenses.

“With the DSLR-A200, we are helping consumers capture high-quality images with advanced technology that’s practical and easy to use,” said Phil Lubell, director of marketing for digital cameras at Sony Electronics. “This model is an ideal step-up for point-and-shoot users who are looking for a camera that can capture virtually all of the photographs they want.”