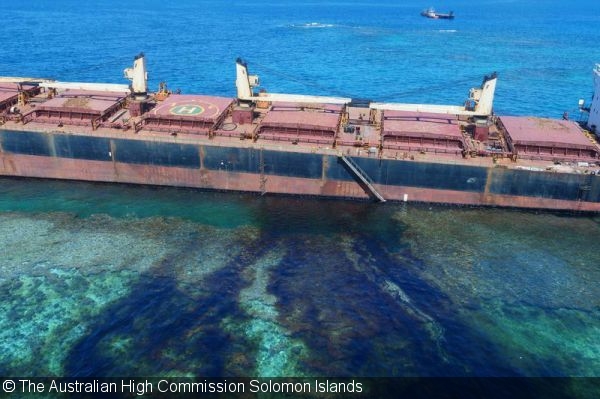 It’s been more than a month since a 740-foot-long ship called the Solomon Trader ran aground near Rennell Island, part of the Solomon Islands. The tanker was loading bauxite—the ore from which aluminum is extracted—when it was pushed onto the reef by Cyclone Oma, leaking heavy fuel oil into the waters of Kangava Bay and threatening the world’s second-largest raised coral atoll.

An estimated 80 tons of oil has already been dumped into the sea, and the slick is now about three miles long, but experts are more concerned about the 650 tons that remain on-board. Marine ecologists are predicting that there will be significant damage to the reef ecosystem, given that oil can kill coral polyps that it comes into contact with—or adversely affect growth and reproduction in the longer run.

The 1,200 residents of Rennell Island, which rely on fishing for their livelihoods, have already been severely affected. Fishing has been impossible since the spill and evaporated oil fumes are contaminating the collected rainwater that local people consume. Businesses are also concerned about the impact on both the indigenous people and marine environment. Worldwide Dive & Sail, owner of the Solomons PNG Master liveaboard, whose operations are some distance from the spill site and are not directly affected, says it is monitoring the situation closely.

King Trader Ltd, the Hong Kong-based owner of the Solomon Trader, initially attempted to use a tugboat to move the stricken vessel, but that effort only pulled the tanker further onto the reef. The Solomon Islands government subsequently asked Australia for help in mid-February and consultants concluded that more needed to be done. According to a March 5 press release, Australia has sent a spill-response crew to try and clean up the mess: Booms are being used to contain the slick and oil is being pumped off the ship. A salvage team is also looking at strategies for removing the wreck.

The Australian government asserts that “responsibility to salvage the vessel and mitigate the environmental impact of this incident rests with the commercial entities involved,” and the current assistance is designed to gain control of the situation so that this responsibility can be handed over to the shipping company and its insurer.

Christopher James wrote:
Oil spills occur all the time and it is the sealife that gets affected each time. Without immediate counter action in each scenario, the death tolls will most likely increase. Before we know it, our food chain might just feel the impact as well.
You must be logged in to comment.
Support Our Sponsors
Advertise With Us
Newsletter
Travel with us