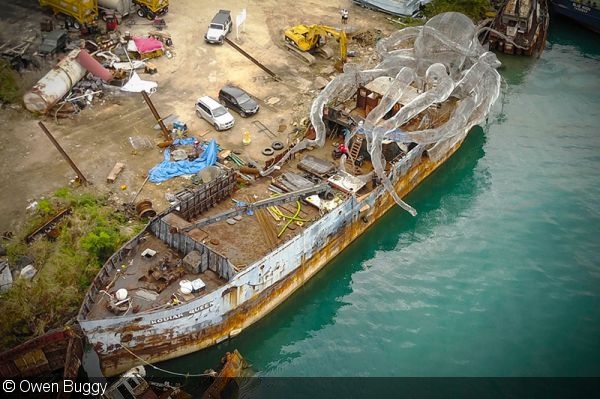 Sir Richard Branson is used to his projects soaring, but for a change his latest has sunk: The British billionaire entrepreneur hopes to create “one of the world’s most meaningful and vibrant reefs” after sinking the Kodiak Queen in the waters of the British Virgin Islands, where he owns his own island. The vessel was one of the only ships to survive the attack on Pearl Harbor during WWII.

As a permanent eco-friendly underwater art installation, the wreck is now known as the BVI Art Reef. According to Branson’s blog, “[It] will be a unique platform for capturing people’s attention on the importance of addressing climate change, protecting coral reefs, and rehabilitating vulnerable marine species.” It is expected that the wreck will eventually become a thriving marine habitat, attracting corals, sea sponges, turtles, sharks, and more. Those creatures will join a large-scale art sculpture of an 80-foot kraken that is installed aboard the vessel.

“A special focus will be on bringing back vulnerable species of grouper, such as the goliath grouper,” said Sir Richard. “I’m confident the BVI Art Reef will be among the most unique and meaningful dive sites in the world and, in turn, will help to inspire future ocean conservationists in my own backyard.”