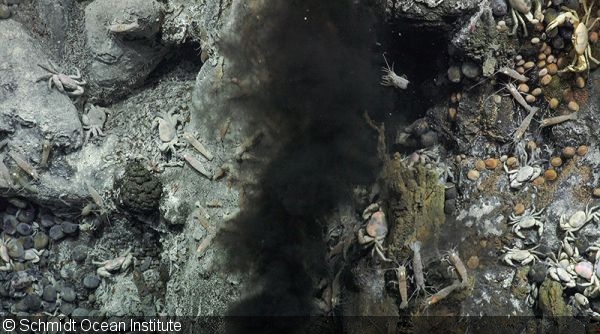 The Schmidt Ocean Institute has wrapped up its “Searching for Life in the Mariana Back-Arc” expedition, returning from the deepest region on the planet with further insights about the hydrothermal vents found there—and the life they support.

After discovering the vents last year, the scientific team went back to the region in December—to depths beyond 13,000 feet—with a newly developed remotely operated vehicle (ROV) called SuBastian. Among its various capabilities, the ROV can gather data about seawater chemistry and temperature, collect physical samples, and acquire high-resolution video.

The data gathered will take time to analyze, but the team suspect that some of the snails, shrimp, crabs, mussels, limpets, squat lobsters, anemones, and polychaete worms that gather around the 100-feet-tall vents might be new species. The expedition confirmed the scientists’ earlier theory that the Mariana Back-Arc hydrothermal ecosystems are different from the ecosystems found at the nearby Volcanic Arc, dictated by the unique geology and fluid chemistry at each site.

To find out more, see the press release and check out wrap-up video of the expedition, below.

APRA HARBOR, GUAM – A team of leading geologists, chemists, and biologists aboard research vessel Falkor have just finished surveying the largely unexplored Mariana Back-Arc for life at depths greater than 13,000 feet. Dr. David Butterfield, JISAO, University of Washington, and Dr. William Chadwick, NOAA-PMEL and Oregon State University, led the group to the Back-Arc; returning for the second phase of a two-part exploration of the region. In 2015, the team of scientists located new hydrothermal vents in the Back-Arc region, including evidence of recent lava flows. This year, the team returned to these vent systems with the new remotely operated vehicle (ROV), SuBastian, to characterize their water chemistry and biodiversity. The new results fill a gap in knowledge about the biogeography of these unique deep-sea ecosystems and has implications for how tectonic setting influences the composition of chemosynthetic animal communities worldwide. 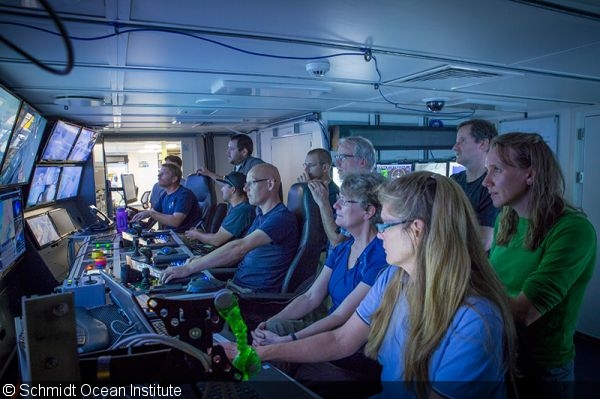 The new vent sites have spectacular chimneys made of sulfide minerals, some up to 30 meters (100 feet) tall. The chimneys were belching smoky vent fluid at temperatures up to 365°C (690°F) and were covered with vent animals including “hairy snails”, shrimp, crabs, mussels, limpets, squat lobsters, anemones, and polychaete worms. Scientists on board Falkor suspect that some new species have been discovered at the new sites, but confirmation will have to await further study back on shore.

The new observations show that the newly discovered vent sites have an ecosystem that is characteristic of the Mariana Back-Arc, with some animal species found nowhere else on Earth. This, despite the fact that each vent site is relatively small and isolated, being separated from the others by up to 100 miles. The new observations suggest that the Back-Arc vent sites are relatively long-lived and that each site has biological “connectivity” with the others despite the long distances. The study also confirmed that the Back-Arc ecosystems are distinct and different from the nearby Volcanic Arc hydrothermal ecosystems, supporting the idea that geological and chemical environment play a key role in selecting animal community composition at hydrothermal vents. 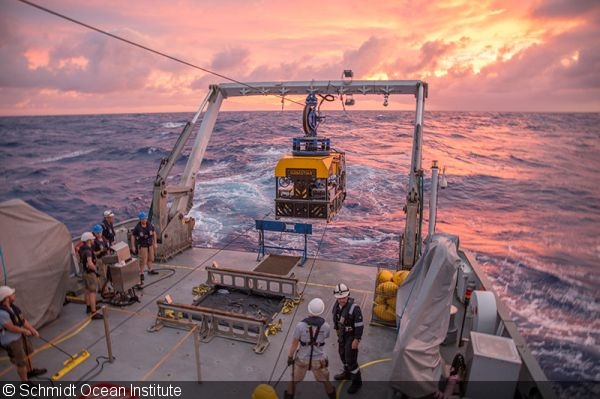 This is the first series of scientific dives for ROV SuBastian. Equipped with numerous cameras, including a high-definition 4K video camera, the dives were live streamed onto YouTube and watched by millions. The multidisciplinary team will continue to analyze the data and samples collected during this expedition to advance research on how life thrives on these extreme deep-sea hydrothermal vents. This research was supported by the NOAA Ocean Exploration and Research Program, the NOAA Pacific Islands Regional Office, and the Schmidt Ocean Institute.

Schmidt Ocean Institute was created by Eric and Wendy Schmidt in 2009 to enable research that expands understanding of the world’s ocean using advanced technology, intelligent observation, and the open sharing of information. Annually the organization invites select scientific teams from around the world to carry out collaborative oceanographic research and technology development aboard its 272-foot research vessel, Falkor, launched in 2012. For more information please visit www.schmidtocean.org.