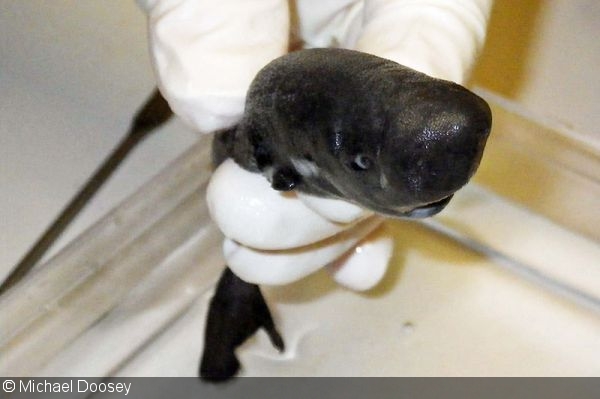 Scientists have identified a new species of pocket shark after carefully studying an individual brought to the Royal D. Suttkus Fish Collection at the Tulane University Biodiversity Research Institute in 2015. The 5½-inch male kitefin shark—caught in the Gulf of Mexico, 190 miles off the coast of Louisiana, in February 2010—has been named the American pocket shark, Mollisquama mississippiensis, and is only the second pocket shark specimen ever recorded. The first specimen—a 16-inch female taken in the Eastern Pacific Ocean in 1979 and now housed at the Zoological Museum in St. Petersburg, Russia—is a distinct species, M. parini.

According to a new paper published in Zootaxa, five features of M. mississippiensis distinguish it from M. parini: The differences include fewer vertebrae and a large number of light-producing photophores that cover much of the body. However, what distinguishes both species from other sharks are the two large pockets situated near the gills. It has been hypothesized that the pockets excrete some sort of luminous fluid or pheromones. The researchers studied the shark using a dissecting microscope and by looking at X-ray images and CT scans.

“The fact that only one pocket shark has ever been reported from the Gulf of Mexico, and that it is a new species, underscores how little we know about the Gulf—especially its deeper waters—and how many additional new species from these waters await discovery,” said co-author Henry Bart, director of the Tulane Biodiversity Research Institute.