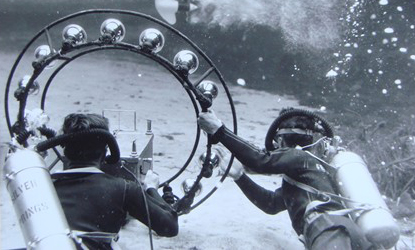 On Wednesday, October 14, pioneering underwater photographer Bruce Mozert passed away at the age of 98, just a few weeks before his 99th birthday. The death was confirmed by Evelyn Yorlano, who worked with Bruce for nearly 40 years in his photo studio in Ocala, his images from locations nearby helping to put Silver Springs, Florida on the tourist map. His pictures would also adorn the pages and covers of Life, Time, and National Geographic, one of his iconic shots helping to launch Jayne Mansfield’s career as Hollywood’s latest “blond bombshell” in the 1950s and 60s.

Already a professional photographer by his 20s, Bruce had been working on an assignment to shoot women's shoes in Miami in 1938 when he found out that Silver Springs was the venue for a forthcoming Tarzan movie. He headed over there to meet Johnny Weissmuller and the cast, and ended up as the official photographer of Silver Springs for the next four-and-a-half decades.

The groundbreaking underwater housing for his Rolleiflex camera—which Bruce fashioned from galvanized sheet metal and Plexiglas—made its first appearance in those early Tarzan movies. He would later refine his housings to be neutrally buoyant by adding just the right amount of lead. Some of Bruce’s early underwater rigs are displayed at museums around the U.S.

“I went out in the backyard of Silver Springs one morning after I had made the camera case and I found an old inner tube,” Bruce told the Ocala Star-Banner in 2013. “That was back when they were made out of real rubber. I fitted it on my arm and my arm fit tight. I attached it to the housing and took it down in the water. Johnny Weissmuller was there. They all laughed at me, but all 12 pictures came out clear. They ended up sending them to Hollywood.”

Bruce’s later movie camera housings were used in some classic films for the big screen, such as the 1954 monster flick Creature from the Black Lagoon, and for major television shows like Mike and the Mermaid and Sea Hunt. He was also a dive pioneer, essentially inventing the first compressed air system when he submerged in a diving helmet tethered to a hose attached to a compressor—the risks of dive injuries not being properly appreciated at the time.

DPG founder Jason Heller had the privilege of interviewing Bruce in 2008, just before the release of Gary Monroe’s book on his work, Silver Springs: The Underwater Photography of Bruce Mozert. The humble photographer, then 91, seemed to sum up his approach to photography, and his life, with these inspiring words: “Do things that nobody else is doing, [and] you’ll be able to reflect on what you created and say, ‘My god, look at that, it’s beautiful.’”