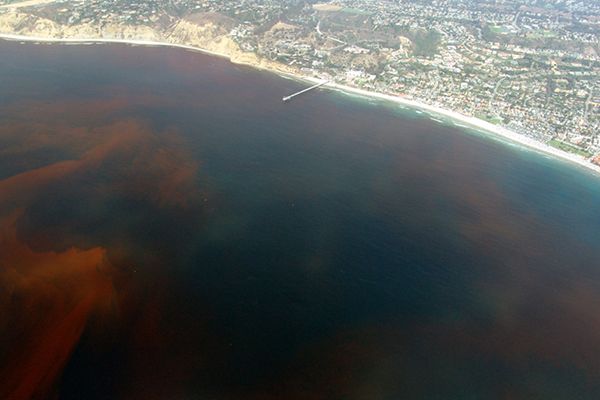 Florida Gov. Rick Scott has declared a state of emergency in several of the state’s counties due to the increasing threat of the red tide—a toxic bloom of algae. The microscopic organism called Karenia brevis is causing environmental and respiratory problems for local residents and marine animals.

While the algae exists in the marine environment year round, various environmental factors have produced a vastly higher concentration in recent months. The total impact is hard to calculate, but it’s estimated that the red tide has killed 300 turtles, dozens of manatees, and one 26-foot-long whale shark.

“There’s no fish left. Red tide killed them all,” research scientist Rick Bartleson told The Washington Post. “All of our concentrations of red tide are still high and would still kill fish if they were out there.”

Some scientists believe that climate change exacerbates the incidences of red tide. Warming waters are more affable to algae growth. A more direct human impact is also to blame: Redirection of water flow has reduced wetlands by 80 percent in some areas. Read more about the science behind the red tide, here.