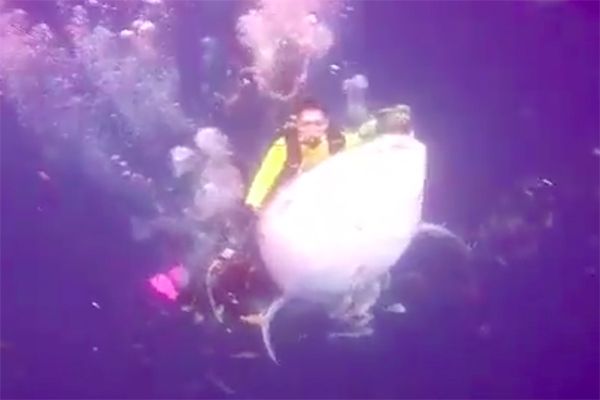 Indonesia’s Cenderawasih Bay has burst on the scene in recent years as a go-to spot for scuba diving with whale sharks. With this popularity comes stupidity: Recently a group of divers decided to grab ahold of a whale shark and take a ride—and capture the whole thing on video. Now, those divers have been arrested.

The video first began making the rounds on Twitter after being posted by Indonesian punk rocker Kaka. Several divers climb on the whale shark as it struggles to swim. The rocker—whose Twitter handle is @fishGOD—mentioned Indonesian Fisheries Minister Susi Pudjiastuti in the tweet.

Authorities acted quickly: “It has been handled. The culprits have been captured,” Susi told Medcom. Authorities haven’t released the names of the culprits or the charges they will face, but it’s comforting to see action taken so swiftly even in a remote locale.

Read more about this story, here.