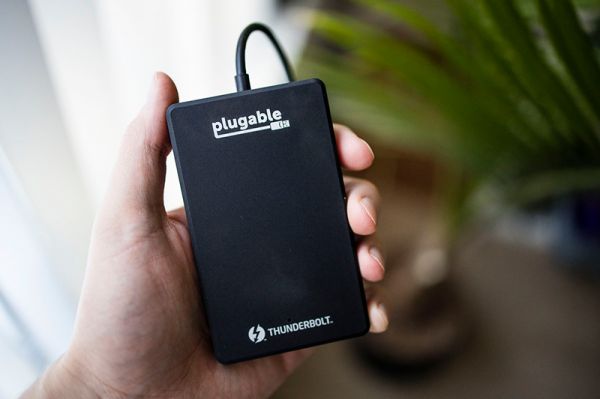 Plugable has announced updated 1TB and 2TB versions of its Thunderbolt 3 NVMe external solid state drives. In case you didn’t know, NVMe stands for “non-volatile memory express,” a technology offering around five times the bandwidth of SATA. The new drives do indeed promise “ludicrous” speed: read speeds of up to 2800MB per second and write speeds of 1800MB per second. If you’re dealing with huge high-resolution TIFF files or massive 4K video clips, this might be the drive for you.

Weighing just 6.1oz (173g), the drives are constructed from solid anodized aluminum and feature a 7-inch (18cm) integrated—i.e., fixed—40Gbps Thunderbolt 3 cable. Although the drives are backwards compatible with USB-C connections, you won’t get the fastest speeds unless you’re making use of your computer’s Thunderbolt 3 port. The drives come pre-formatted with exFAT, so you’ll need to reformat to your preferred file system on your chosen Mac or Windows platform.

The Plugable Thunderbolt 3 NVMe SSDs cost $299 for the 1TB model and $499 for the 2TB model, but you can get $50 off and $100 off, respectively, if you purchase during the “limited time” launch offer period; see the announcement for details.