The massive Jacob Javitz Center in New York was host to the PDN PhotoPlus International Conference + Expo 2007 this week, as tens of thousands of photo pros attended the three day event. This is pretty much THE show for the photography industry. Last year's show attracted 27,000 visitors and 300 exhibitors. 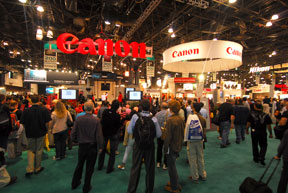 Canon's booth had prime visibility right in front of the entrance. I made a mental note that this is also where Microsoft's booth usually was during internet and technology expos. Must be the top biller of the venue. Seminars throughout the day drew large crowds, most interested in the new 21 megapixel EOS-1Ds Mark III. 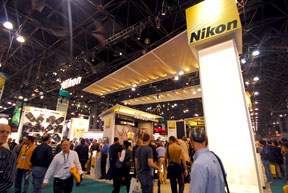 Nikon's booth however seemed the most active, the most abuzz with energy and excitement over the soon to be released D3 and D-300. Unrelated to underwater photography, they had a station with D2X's mounted with 500mm and 600mm lenses - very impressive pieces of glass, with a price tag around $9,000

Disclaimer: I shoot Nikon, so I'm quite excited about the following... 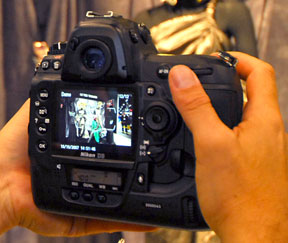 The D3 is an amazing masterpiece. The LCD and viewfinder are significantly larger than the D2X. As with the D300, the D3 has live-view, which seems to be the new standard for DSLR's. The highly anticipated D3 also has higher resolution, faster auto focus and shutter, a higher ISO range, and of course has the first full size sensor in Nikon's portfolio. This means that you can use Nikon film lenses (non "DX" lenses) that may have lost their use in your collection if you made the switch from Nikon film SLR to DSLR over the last few years (ie: the 16mm fisheye, which was replaced by the 10.5mm DX lens). The D3 can accept DX lenses, but it reverts to a 5.1MP cropped image, albeit at a higher resolution than previous models. 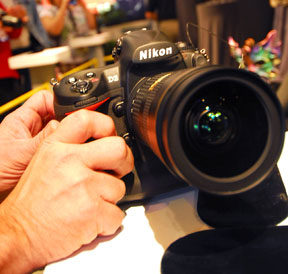 The D300 will be the more popular (more affordable) new release. At 12.3MP, with the same 3" LCD screen as the D3 and live view, the D300 is exciting for underwater photographers. The D200 seems to have become one of the most popular cameras in the water due to the price/quality balance, which is now ever more true for the D300. Expect to see housings hitting the market soon.

You can read Mike McNamara's review on the new Nikon DSLR's here. 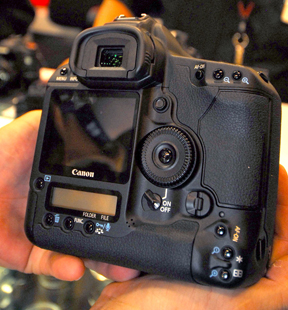 The Canon EOS-1Ds Mark III was all the rage when first announced, a 21MP monster. I was expecting more buzz over Canon's new flagship pro DSLR versus the D3. But I was wrong. Maybe it's because the D3 isn't on the street yet and therefore it has piqued everyone's curiosity, but the buzz around Canon just didn't feel as authentic as that around Nikon.

That being said, the EOS-1Ds Mark III is a fantastic piece of engineering and quite an amazing camera.

Mike McNamara points out that "...While 21.1MP isn't a giant leap in resolution from the 16.7MP of the older EOS 1Ds Mark II, it does bring this camera in closer competition with medium format systems used in photo studios..."

You can read Mike McNamara's review on the new Canon DSLR's here. 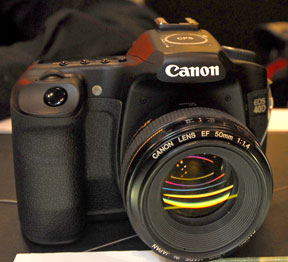 The Canon EOS 40D and Nikon's D-300 are the prosumer/professional models which are sure to attract the most underwater photographers due to the combination of quality and price. The 40D and D300 produce high quality images, both with live preview. Each generation of DSLR's has improved upon the general image quality of the previous generation, and this round is no different. To put it in perspective the resolution on the D300 is supposedly better than the D2x. 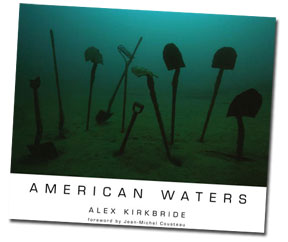 I caught Alex Kirkbride at the Kodak booth, who was signing his new book American Waters, a unique book of images captured in every one of the 50 states, with a foreward by Jean-Michael Cousteau. American Waters is currently also on exhibit through November 1st at Hammer Galleries (33 west 57th street, NYC). Expect a complete review of the book from us soon as well as a featured gallery from Alex right here on DPG. 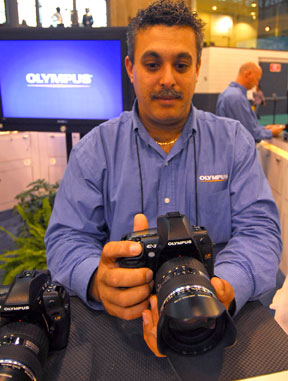 Marc Farb from Olympus shows us the new 10 MP E3 DSLR. It claims to have the fastest auto focus in the industry.

I was able to confirm from Olympus sources that there will be a housing released for the E3 shortly after the release of the camera itself this November. Seems a little late in the launch to not have final plans for the housing, but I'll give them the benefit of the doubt that they'll do a good job with it. Olympus, an early brand in the world of underwater digital photography, has done a superb job of re-entering the hearts and minds of the underwater market with a suite of prosumer cameras, housings and accessories, including a strobe. I congratulate their efforts to address and support the underwater market. Expect a review of the E3 from Mike McNamara soon.

Ok film people, don't take this the wrong way, but I thought this was really funny.. 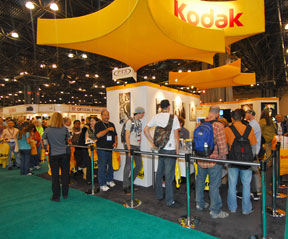 I was wondering why there was such a long line at the Kodak booth, and wouldn't you know...they were giving away free film. In this digital age, I thought that the real live metaphor in and of itself was pretty funny. 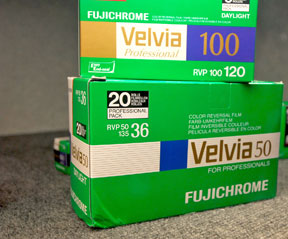 Speaking of film, my personal favorite (and the favorite of most underwater shooters) has been reintroduced into the market - Fuji Velvia 50. The color rich slide film disappeared for a while - in fact that was when I stopped shooting film altogether. Although I may not be coming back to the world of film, I'm happy to see that the crown jewel of slide film is back on the market. 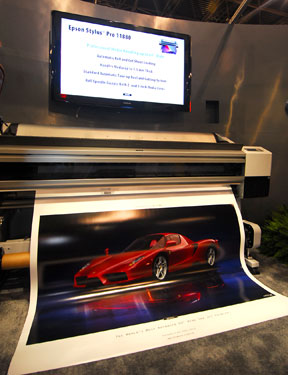 Epson had their entire line of printers on display including the printer all others want to be when they grow up, the 64" professional Epson 11880. The wider color gamut produces richer blues and purples, perfect for the underwater photographer...of course at a price tag of just under $15,000, this may not become part of your collection any time soon. For prints up to 44", the 9880 can be looked at as the little sister of the 11880 for around $5,000.

However, the $1,200 Epson 3800 is an affordable high end desktop printer that can produce 17" wide prints and a good fit for the underwater photographer looking to create small to mid-size prints for framing. 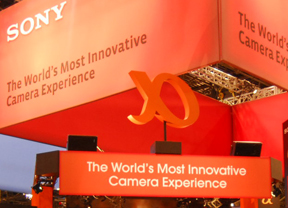 I had a chance to play around with the Alpha 700 when I visited Mike McNamara at the Popular Photography & Imaging Magazine offices a few weeks back. Mike gives the camera a good review for underwater shooters, but personally I wasn't a big fan (or need more time with the camera) after shooting it for a few minutes. The camera body itself is slick, but I felt the image quality was lagging behind that of Nikon, Canon and Olympus. 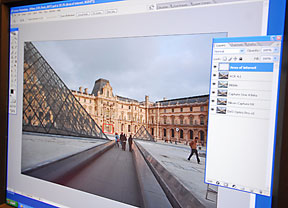 When Mike told me of a new RAW converter from DXO that was possibly better than Adobe Camera Raw, Nikon Capture, Apple Aperture and the rest of the pack, I had to see it with my own eyes.

Surely enough, DXO Optics Pro 5 seems to handle the correction of aberrations and maintain color accuracy better than any of the other RAW converters. Stay tuned for a full review once we receive a copy of the software. 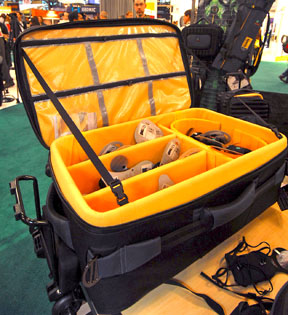 With the difficulties of traveling around the world with excessive photo and diving equipment, I am always on the lookout for new cases that are light, provide protection and are efficient and modular for multiple cameras, housings, strobes and accessories.

I've been a fan of the Kata brand ever since picking up a Ruck Sac a year or so ago. These 37" and 39" long lighting cases from Kata (model # OC-97 and Palms 2) caught my eye as a possibility for my next gear bags. They're light, well padded (although an improved version could use some internal metal reinforcing, particularly for the top of the bag), intelligently and intuitively designed, and two of these just may have my name on them.

Being at PhotoPlus Expo is like being the proverbial kid in a candy store. The advances in photography are staggering and walking the aisles of the show only reminds us of that. The only show that beats this is DEMA, which is coming up in less than two weeks - we're pretty psyched. Attending DEMA? Come meet us there at booth # 2449!

Steve Durant wrote:
Interesting
You must be logged in to comment.
Support Our Sponsors
Advertise With Us
Newsletter
Travel with us